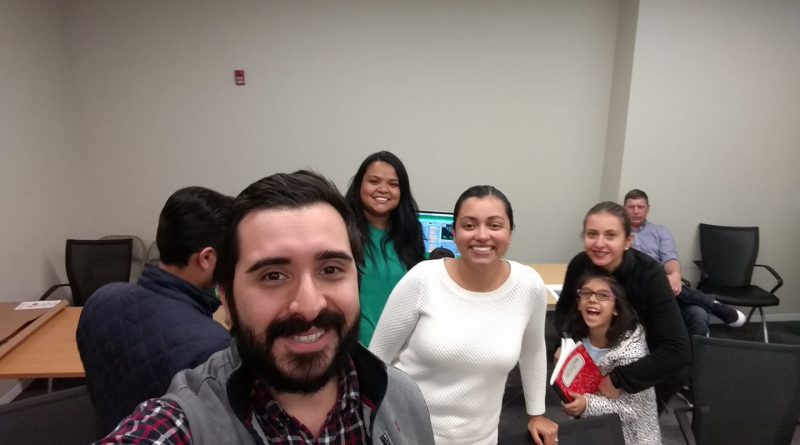 Lizette is 11 years old and wants to be a biomedical engineer when she grows up.

“She’s been going to a STEM (science, technology, engineering and math) school since she was in kindergarten, so her technology teacher has been instrumental in her development,” said Lizette’s mother, Odette Ojeda. “But there’s only so much that a Chicago Public Schools can do, and that’s where Antonio comes in.”

Antonio Garcia launched Latinx Code in October, a non-profit organization and a tech hub where Latinx kids learn computer science and the basics of web development, including HTML, CSS, CMS and Javascript.

It’s an outlet Garcia never had as a kid who was interested in technology, an interest sparked by video games.

“I wish I would’ve had this type of help or exposure when I was growing up,” said Garcia, who is 30 years old. “As a kid, a Latino kid, you don’t know about these tech jobs or what a software developer does.”

Garcia graduated from the University of Illinois at Chicago in 2011 with a Bachelor of Science in Information and Decision Sciences. Then he spent the last six years in the tech world teaching computer science workshops and working as a web developer and tech consultant for community-owned companies like BLUE1647 and Latina Girls Code, which he co-founded.

So he wants to expose Latinx kids to this highly competitive field where Latinos don’t have much representation.

According to a report by the U.S. Congress Joint Economic Committee, Hispanics are underrepresented in undergraduate and graduate STEM programs, and less than 2 percent of the STEM workforce is Hispanic, while almost 20 percent of the country’s youth population is Hispanic.

He also founded the DACA Network, a professional network for undocumented immigrants. He is currently a fellow at Voqal, a media and tech organization whose mission is to advance social equity. And he also worked at another organization as a coding instructor teaching only Latina girls. “I agree that we need more women in STEM but I felt bad turning away other kids who really wanted to learn how to code,” he said. “I couldn’t do it.”

Latinx Code, headquartered in Pilsen, is inclusive and welcomes Latinx kids of any gender, hence the term Latinx in the title — that’s the gender-neutral version of Latino or Latina.

“What surprises me the most about working with kids is how quickly they adapt and how much further ahead they are than I was at their age,” said Garcia. “My family got their first computer when I was 12 years old. Now, youth are native to tech experiences since early childhood.”

Lizette was a student of Garcia’s at his previous organization, and, naturally, her family followed Garcia when he opened Latinx Code.

“Antonio has a lot of ideas to engage the community that he wasn’t able to do at Latina Girls Code,” Ojeda said. “Seeing his passion in teaching young people coding and tech, it was natural for us to follow him and support him in anything we could.”

Most importantly, Ojeda said, “I have seen Lizette become more secure, more outspoken about technology and not to shy away from it. Being a woman, being a Latina, and being young, it’s easy to feel insecure in settings of technology.”

For Ojeda, not only is it important for her tech-savvy daughter to have this outlet, it’s also important that she has mentors like Garcia.

“In the Latino community, we’re still learning about mentorship,” she said. “From my experience, it’s kind of a new concept because as immigrants, we try to make it work for ourselves. That takes a lot of effort and time, now there’s this awakening to you know we have to mentor each other.”

Garcia said being a mentor is “an honor I don’t take lightly. The right introduction to a new educational subject can make a world of difference. Most importantly, I don’t want them to only be consumers, I want them to produce apps and content relevant to solving problems in their communities while advancing in STEM careers.”

The organization is still in its early stages, without a permanent meeting spot and looks to places like public libraries, colleges or other spaces with computer labs to host the class. But Garcia has big plans for 2018, which will kickoff with a Q&A session with Latinx employees at Groupon’s headquarters.

“I will also fully integrate Latinx Code with the professional networks with which I am affiliated,” Garcia said. “This will help Latinx Code become a supportive network of professionals who mentor youth, who will [themselves] in turn mentor youth one day.”

As for Garcia’s personal plans, “I don’t ever want to stop learning. As I rise, I want to bring others up with me.”