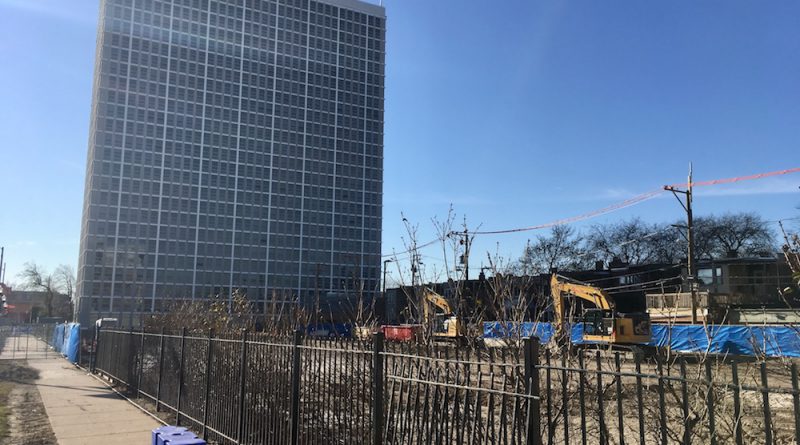 Construction crews broke ground November 28 on a mixed-use development despite continued efforts by local community groups to obstruct it, or at least negotiate a better deal.

The Rogers Park Community Benefits Coalition says the development, called the Concord at Sheridan, will pull traffic away from local businesses, funnel profits out of the neighborhood and displace Rogers Park residents by accelerating the gentrification that is already at work in the area.

The coalition, which includes the Jane Addams Senior Caucus and ONE Northside, is calling on Alderman Joe Moore, 49th Ward, to enforce a legal framework of benefits the developers must offer the community.

The mixed-use, transit-oriented development, located at 6418 N. Sheridan Road, is a partnership between Target Corporation, Three Corners Development and the Chicago Housing Authority. It will include a 23,000-square-foot Target mini-store, 111 mixed-income apartment units and 136 below-ground parking spaces, according to a presentation available from Moore’s office. It will include a community room for residents of the Caroline Hedger senior apartments.

The community benefits coalition wants more. They worry that as the corridor near Loyola University becomes a more convenient and desirable place to live, rents will rise and Rogers Park residents will be forced out. They argue that a legal contract with specific concessions would help keep Rogers Park affordable for longtime residents of the area.

They want Target to guarantee a $15 minimum wage and benefits for full-time employees, and hiring that prioritizes locals, seniors, students and formerly incarcerated people. They ask that Caroline Hedger residents be involved in decision-making about their new community room. They want a higher percentage of affordable units, including three- and four-bedroom apartments; 24-hour security in the parking lot; and they want the developers to contribute to a fund to support locally-owned businesses.

Efforts at raising awareness in the community include distributing fliers, collecting signatures and holding teach-ins to raise awareness about how a community benefits agreement could work. They hope that with enough pressure, Target, Three Corners Development and Moore will strike a deal.

Debra Miller, 66, is a member of the Jane Addams Senior Caucus. She has stood outside for hours at a time, using her walker as support, talking to passersby to build enthusiasm for the CBA. “From the beginning, Alderman Moore has been on the side of Target,” she said. “The businesses are really fearful of Target coming in. They’ve said that Target will affect their bottom line.”

Traditionally, community benefits agreements are signed during the zoning process, when communities have more leverage over the developers.

But Allegra Cira Fischer, an attorney with the Community Law Project who has supported the coalition in developing its asks, doesn’t think the fight is over. “I don’t think it’s ever too late to negotiate a potential contract that could positively impact a community surrounding a new development,” she said.

But Moore has no intention of collaborating. “You don’t renegotiate a deal that’s already been finalized,” he said. “The main reason I supported the Target is that in addition to bringing in jobs, they’re bringing in products that aren’t currently available in my community, like apparel items [and] housewares.”

Some local businesses support the development as well. John Arnsdorff, the owner of Audio Archaeology Chicago, believes the Target will improve foot traffic in the area. “Having more convenient places to shop is really an asset when people are looking at where they’re going to move,” he said.

Target spokesperson Liz Hancock said that Target representatives met with community groups and Moore during the proposal process and will continue to work with local stakeholders once the store is open.

“I believe there is room for both small, locally-owned businesses as well as national chains that are good corporate citizens, as I believe Target has demonstrated themselves to be,” said Moore.