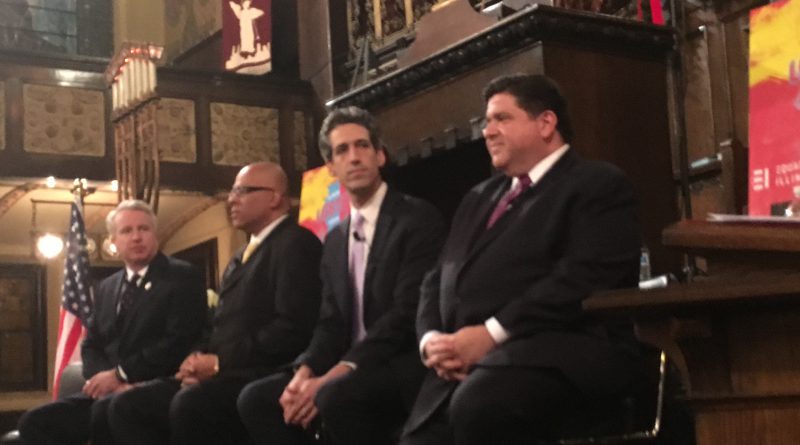 In Illinois’ first-ever forum for statewide candidates that focused on LGBTQ issues, five Democratic candidates for Illinois governor vied for the support of queer Illinoisans on Dec. 6.

The hour-long forum was held at the Second Presbyterian Church in Chicago’s South Loop and was broadcast to viewing locations across the state. Questions came from the public and were read by leaders of prominent nonprofits.

Support for LGBTQ equality is practically a prerequisite for running on the Democratic ticket, so the candidates – State Senator Daniel Biss (D-Evanston), Madison County Superintendent of Schools Bob Daiber, anti-violence activist Tio Hardiman, businessman Chris Kennedy, and venture capitalist J. B. Pritzker – agreed on the basics. But their answers revealed subtle distinctions that LGBTQ voters were sure to notice.

Each candidate committed to hiring transgender Illinoisans to prominent positions in their campaigns, to appointing openly queer people to state boards, and, should they win the Democratic nomination, to attending another LGBTQ forum with their Republican counterpart.

Candidates with a history of leadership had a clear advantage. Biss, the only candidate with a record as an elected official, pointed to his work banning conversion therapy and the gay panic defense; Pritzker touted his work advocating for gay rights before it was safe to do so. Daiber said he was the only superintendent in Illinois to host a forum on how schools ought to protect the rights of trans students.

Pritzker, widely seen as the front-runner based on his name recognition, unprecedented financial resources and an endorsement from the prominent labor group AFL-CIO, tackled LGBTQ issues with his usual rigor. He frequently attacked Republican Governor Bruce Rauner for the budget stalemate that resulted in massive funding cuts to programs Pritzker deemed critical to the LGBTQ community.

Hardiman, who said he was very intentionally running to be Illinois’ first black governor, rooted his understanding of LGBTQ issues in his own experience of racism and discrimination. But he offered only generalities on most issues, repeating their importance but failing to offer any concrete solutions. The exception: Twice he suggested a progressive (though politically unlikely) financial transaction tax to fund social programs benefitting the queer community.

Biss’ policy suggestions offered a concrete set of initiatives to advance queer justice. The state’s budget stalemate, finally resolved last summer, resulted in massive cuts to state health care programs. Biss promised he would fund them again. He echoed Hardiman in saying he would tax the financial sector to fund social services like guaranteed access to PrEP, the HIV prevention drug. His plan for statewide single-payer health care would benefit all Illinoisans, he said, but particularly vulnerable groups like undocumented LGBTQ people, whose fear of providing their information make them reluctant to use existing health care programs.

Biss’ remarks seemed targeted towards Pritzker, his main rival. When Pritzker said he would ask the Illinois State Board of Education to set and enforce guidelines to protect trans youth in schools, Biss one-upped him by committing to amend the state constitution to include gender minority status on its list of protected groups.

If any candidate missed the mark, it was downstate candidate Bob Daiber. The superintendent stumbled twice over the LGBTQ acronym, a faux pas the audience was sure to notice. His closing remarks, which likened the gay-straight divide to the upstate-downstate divide, likely alienated a community that has moved past assimilationism to a goal of equity in difference.

But Daiber’s most telling blunder was his answer to a question about how he would defend LGBTQ senior citizens, many of whom report discrimination in nursing homes. Where other candidates offered plans to increase staff pay, provide sensitivity training for nursing home staff and fund home care programs, Daiber said that a lesbian couple had moved into his grandmother’s old house, and he was fine with that.

Chris Kennedy, who is running as a political outsider despite being part of the Kennedy family dynasty, blended in with the pack. Echoing Biss’ and Pritzker’s policy agendas but lacking their charisma, Kennedy acknowledged the gravity of the oppression facing the queer community in Illinois, particularly queer Illinoisans of color. He advocated for inclusive sex education and efforts to raise graduation rates for LGBTQ students. “We want every American to believe that if they have a gay child, a transgender child, a child that is genderfluid, that this is the best state in America to educate their kid.”

The forum was moderated by Brian C. Johnson, the CEO of Equality Illinois. After the candidates’ concluding remarks, Johnson turned to the crowd and asked everyone who intended to vote in the Democratic primary to stand. As one, the audience rose. No matter who became the Democratic nominee, Johnson said, the queer community would be there to hold that person accountable.