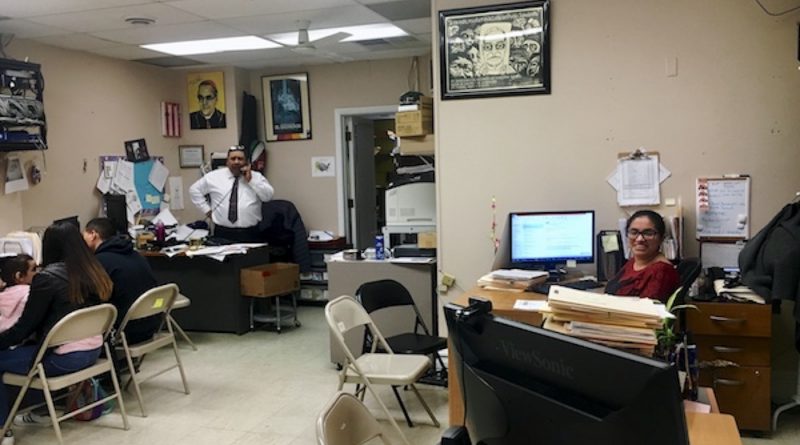 The Salvadoran consulate in Chicago is tucked away in a small office above a Chick-Fil-A and a mattress store, in a building next to the State and Lake train stop in the heart of the Loop. On a wintry morning, the consulate’s waiting room was packed, as usual, with Salvadorans — young, old, men and women dressed in their Sunday best, although it was Tuesday, Nov. 14 — waiting for appointments with their country’s representatives.

This time around, though, there was an added pressure in the air.

On Nov. 3, the United States was set to begin removing protections from immigrants under the Temporary Protective Status program — removing deportation protections from nearly 300,000 Haitians and Central Americans. Nearly two thirds of these immigrants are Salvadoran.

The administration has already removed TPS protections from Nicaraguan and Haitian immigrants. However, the White House announced it would take more time to decide the fate of 57,000 Honduran immigrants living in the U.S. under these protections, and has yet to make an announcement regarding the fate of Salvadoran TPS recipients.

That Tuesday morning, a representative from Centro Romero, a Chicago-based organization that serves the city’s immigrant population, especially those from Central American nations, visited the consulate to speak to people about their migratory worries — particularly around TPS. The man, Jose Manuel Ventura, has been an organizer in Chicago’s immigrant community ever since he moved to the U.S. 30 years ago.

“The most probable is that they’ll remove TPS,” he told the crowd, immediately gaining their full attention. “In the best of cases it will take until September 2018 to remove protections.”

In Spanish, a man waiting in line thanked Ventura.

“I just want to say I thank you a lot and that you want to help us because the situation in our country isn’t great,” said the man, Apolinario Guerrero, who immigrated to the United States from El Salvador in 2002. “I am now a citizen but I want to thank you for helping our people. If someone has a question [ask it] because things aren’t easy right now.”

Though Guerrero got his citizenship nearly two years ago, he was at the consulate that day to figure out the prospects for his nephew, who he said had just recently arrived in Chicago after being released from a detention center at the border. Guerrero said the last year has been stressful for his family, because his son-in-law is protected by TPS and his daughter is a recipient of the Deferred Action for Childhood Arrivals program. In September, Attorney General Jeff Sessions announced the DACA program was going to end. Currently, nearly 800,000 DACA recipients nervously wait for further announcements from the White House, which plans to have the program expire on March 5, 2018.

Ventura was at the consulate to attempt to ease some of these families’ stresses. He asked if anyone waiting in line was a TPS recipient. No one moved. To ease the fears of people in the crowd, Ventura said the U.S. government has authorized him to work with people with immigration issues. He emphasized that he does not work for the Salvadoran government, the consulate or the U.S. government.

Two people then lifted their hands.

TPS, awarded to immigrants from countries like El Salvador, Rwanda, Syria and Honduras, was created more than 20 years ago to protect those who left their countries after devastation from civil war or natural disasters. The status was made available for Salvadorans in 2001, following a devastating series of earthquakes. But for many Salvadorans, the earthquakes were just the latest challenge in a society still struggling with the brutal effects of the civil war that tore apart their tiny country in the 1980s. TPS availability was a saving grace. Until now.

Ventura said there’s a chance there will be a grace period of six to 18 months for Salvadoran TPS recipients to leave the U.S., since the Salvadoran population is the largest that receives TPS protection. However, Ventura said that also means immigrants “will lose everything” including their homes, social security benefits and their lives in the U.S.

“When the Haitians lost TPS, that’s when we knew no one was going to be safe,” he said, in his native Spanish. “We’ve been preparing the community to see in which ways we can start working on individual cases to see if there’s any chance they can apply for any other kind of migratory benefit.

“There are some who could get permanent residency because they have a kid who is 21 or about to turn 21,” he said.

But the number of TPS recipients with adult children, Ventura said, is small.

When announcing the end of TPS for Nicaragua and Haiti, Acting Secretary of Homeland Security Elaine Duke said DHS will “provide time for individuals with TPS to seek an alternative lawful immigration status in the United States, if eligible.” Alternative immigration statuses include transferring to non immigrant class visas or even applying to U visas — given to survivors of traumatic crimes who were willing to cooperate with authorities.

Still, Ventura said the removal of TPS will hurt the most vulnerable of Salvadoran immigrants. As he sat in an otherwise empty meeting room at the consulate, Ventura nervously went to his notes before mentioning the population he is most worried about, his voice shaking.

“There are those who worked here, retired here, and they are receiving social security benefits,” he said. “The thing is, if they don’t have an immigration permit, or a work or residency permit from the United States, they will no longer get those benefits. And those are people that, at that age, well, they can’t work anymore and stuff. So, unfortunately, that population — even though it isn’t large — I think that without the TPS, they’re going to die.”

El Salvador consul Patricia Maza-Pittsford anxiously awaits news on the future of this program. Thousands of Salvadorans under her jurisdiction — which serves the Midwest — are able to live and work in the U.S. thanks to TPS. Though the Midwestern Salvadoran population is small compared to those in Los Angeles, Virginia and New York, Maza-Pittsford said fear is tangible in the community. Though there’s not much the consulate can do to influence American law, she said, the Salvadoran government is trying to establish support networks for immigrants who might want to fight in court for the right to stay in the U.S.

“El Salvador has hired legal assistance, attorneys that come and people can ask them questions with regards to looking at their cases specifically,” she said. “People were so used to filing or re-registering for TPS that they did not study what other possibilities or what other avenues they might have to adjust their status.”

Meanwhile governmental organizations in El Salvador, she said, are also preparing for potential arrivals of Salvadorans who, after 20 or 30 years living in America, will have to go home.

David Sandoval, one of the two people who raised their hands when Ventura asked if there were any TPS recipients in the room, sat in the consulate’s waiting room. He was there to renew passports for his two children, all of whom are DACA recipients.

Sandoval, who has lived in the U.S. for nearly 15 years, said his family hasn’t approached immigration lawyers yet because they want to get a clearer picture of what could happen.

“We’re just waiting, we have a lot of doubts of what will happen, a lot of worries, because TPS is how we survive here,” he said. “But we’re staying positive, trusting that it’s not just the man’s (Trump’s) word, I have faith that God can do something too. We are holding on to whatever God decides.”

Featured photo: Jose Manuel Ventura, director of legal services at Centro Romero, answers a call during a busy day in the office. Mr. Ventura said he is concerned for the future of Salvadoran immigrants who might lose Temporary Status Protection. Photo credit: Mariana Alfaro