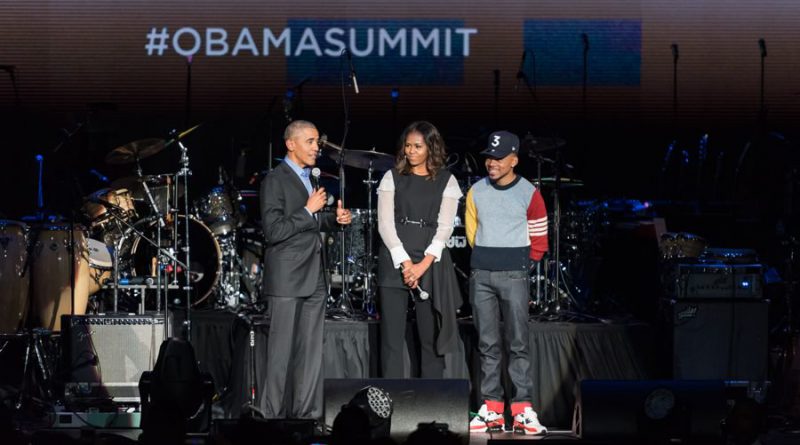 Global leaders came together this week to welcome Barack Obama back home.

This time around, however, the former United States president did not meet with high functionaries and heads of state. Instead, he and former First Lady Michelle Obama discussed activism and leadership with nearly 500 young community organizers from across the world during the first-ever Obama Foundation Summit. Big-name stars, such as Lin-Manuel Miranda, Britain’s Prince Harry and Chance the Rapper, were there too.

The summit, held Oct. 31-Nov. 1 in a hotel on Chicago’s Near South Side, featured speeches by the Obamas and Prince Harry, as well as a star-studded concert. During all activities, participants were encouraged to continue working for their communities to effect change.

“Change is hard, change is possible … but it doesn’t happen overnight,” the former president said. “(Change) requires sustained energy and focus and commitment and most of all, resilience. That’s where hope comes in handy.”

During the two days, the halls of the Marriott Marquis hotel came alive with hundreds of voices and thousands of ideas. Young activists connected with each other and with established community organizers through breakout sessions and community dinners. Guests — who hailed from 27 states and around 60 countries — were either nominated by community organizations in their home countries or invited after applying online at Obama.org.

Two of these participants were Valentino Magliano and Roberto Pontecorvo, 20-something activists from Italy. Magliano was invited after organizations in Milan recognized him as an enterprising youth leader, while Pontecorvo, from the smaller town of Praiano, applied independently.

Magliano, who is involved in education activism in Italy, helps prepare students   to be public speakers.

“The possibility to inspire more young students, in school and education activities, it gives me the opportunity to go to school and say to them ‘So, I don’t have a university degree but I tried, I studied for myself every day, every day, you can reach a lot, a lot, a lot of opportunities and you can become a leader, you have to work a lot,’” Magliano said.

Visibly giddy from the day’s activities, Magliano said the summit was an opportunity not to talk about American politics but to connect with other young global leaders who, like him, want to make their communities and the world a better place.

Similarly, Pontecorvo, who works in social empowerment, said he was thankful for the “unique occasion not to just meet incredible people but to share amazing stories.”

“When you work on big projects, you have ups and downs, a moment when everything is fine and a moment when something goes wrong,” he said. “This kind of occasion picks you up again and gives you the motivation to continue and keep going.”

President Obama reminisced about his days as a community organizer on the South Side, to encourage participants to not give up on their activism. In his opening speech the president remembered his early struggles trying to find his place in the organizer community.

As a young man , he was inspired to become civically active by the Civil Rights movement and Freedom Riders , he recounted. But there “wasn’t any movement around at the time when I graduated from college,” Obama told the crowd.

“So I looked around and ultimately there were a small group of churches on the South Side of Chicago that were interested in dealing with steel plants that had closed and racial turnover that had taken place, and had decided to hire a community organizer to help them stabilize their communities. And they had no money so all they could afford to hire was me.”

The president said he didn’t really know then what a community organizer was, but for the next three years he traveled throughout the South Side working with community leaders to fight the drug trade, improve schools and deal with environmental issues.

“I didn’t really set the world on fire, I didn’t lead a movement,” he said. “But what I did learn was that ordinary people in local communities can do extraordinary things when they’re given a chance, when their voices are heard, when they come together, when they recognize themselves in each other.”

And though most of the organizers at the summit had traveled hours to sit in a room with the president, some just took a bus over to the premises — the Chicago locals. Jahmal Cole, organizer, author and public speaker, was one of them.

Cole is the founder of “My Block, My Hood, My City,” a Chicago youth outreach program that takes teens on trips outside their neighborhoods while also helping them build pride in their own ‘hoods. Cole said that although he had never met Obama or worked for his campaigns in the past, he and the former president share a common background as Chicago community organizers. Cole, who was invited by the Obama Foundation, said the summit was an opportunity to not only learn from the president, but to gather new ideas from the global leaders gathered by the foundation.

He said he was there to learn, “what’s something simple they’re doing in their neighborhood to create change and how can I implement those things in my community.”

Cole said President Obama brought him hope, because the former president was able to arouse the enthusiasm of everybody — “different genders, color, ethnicity, opinion, whatever.”

“Obama brought people together,” he said. “That’s his legacy.”

Featured photo: Former President Barack Obama and First Lady Michelle Obama open the Obama Foundation community concert with Chicago artist Chance the Rapper. The singer has known the Obamas since he was a child after his father worked for the former president. Photo Credit: Catherine Kim/The Daily Northwestern.