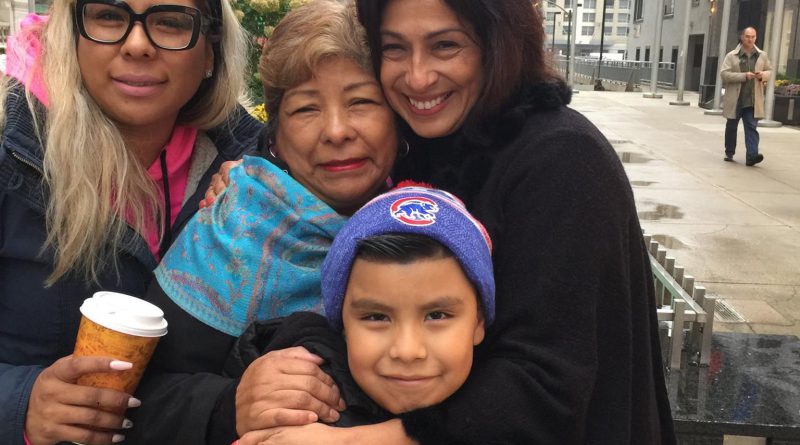 A bill likely to be heard in the state legislature this week could make it easier for undocumented immigrants who are victims of crimes to obtain a U visa that lets them stay in the U.S. The measure would streamline how local law enforcement agencies statewide fill out paperwork confirming that immigrants cooperated with law enforcement and are hence eligible for the visa. Such a provision was removed from immigration-related legislation that passed this summer.

Genoveva Ramirez is among many undocumented immigrants statewide who are hoping for a U visa. She and her grandson were attacked during a home invasion last year.

Immigration officials recently told the 67-year-old undocumented Berwyn resident she needed to leave the country by the end of October.

The last week of October, more than a year after she filed her U visa application, U.S. Customs and Immigration Services granted Ramirez “deferred action” by pushing her onto a backlogged waitlist that is currently responding to applications filed nearly three years ago. Ramirez no longer faces immediate deportation, but she is left in legal limbo as she waits to see if and when she will be granted a visa. USCIS can issue only 10,000 U visas each year.

Even before getting on the federal waitlist for a U visa, immigrants who are crime victims must get certification from local law enforcement officers asserting that they cooperated with the investigation. But some police officers ignore or delay signing the certifications, often because they don’t understand the process, according to immigrants rights groups and lawyers.

Advocates say Illinois law enforcement agencies need a quicker and more uniform approach to how they issue certifications that confirm applicants cooperated with police. Senate Bill 32, the Voices of Immigrant Communities Empowering Survivors (VOICES) Act, aims to set statewide standards in how much time and attention is given to certification requests.

After passing the Illinois Senate with bipartisan support this summer, the VOICES Act could be up for a vote during the House’s fall veto session as soon as this week. Democratic Rep. Elizabeth Hernandez is co-sponsor of the bill and represents the 24th district, where Ramirez lives.

“Since it directly impacted a constituent of mine, that really put a face to the issue,” Hernandez said. “A grandmother who works at night and takes care of her grandkids in the day, this is just ­– it’s almost criminal to think that this would be done to her. And so I had to (co-sponsor). This was a must.”

The TRUST Act, signed into law by Gov. Bruce Rauner this summer, makes it illegal for police to search or arrest undocumented immigrants in Illinois based solely on their immigration status. The TRUST Act originally included provisions to streamline the process of issuing U visa certifications, but that section was pulled just before the bill passed due to concerns from local law enforcement agencies.

Fred Tsao, senior policy counsel at Illinois Coalition for Immigration and Refugee Rights, said that’s when ICIRR saw the need to update parts of a 2014 DePaul University report that influenced the original TRUST Act. For an updated ICIRR report released last month, Tsao and other staff surveyed and interviewed local law enforcement agencies to document discrepancies in how they issue certifications across the state. The report’s recommendations are now part of the VOICES Act.

Those recommendations include requiring agencies to respond to certification requests within 90 business days and to give one person at each agency the responsibility of reviewing requests. According to the report, varied practices in jurisdictions across the state mean some requests are never considered, some are granted quickly, and some are denied based on arbitrary conditions like applicants’ criminal histories and whether or not investigations into the crimes cited by applicants resulted in a conviction.

“The certification form itself is five pages and a lot of that is blank space,” Tsao said. “Much of it is either identity information regarding the applications or information that can be re-typed or cut and pasted from the police reports provided by the applicants. We would argue that, you know, once you realized what the form is and what it does, it should not be that difficult or burdensome to complete.”

Trisha Teofilo Olave, senior legal supervisor at the National Immigrant Justice Center, said many local law enforcement officials don’t understand the purpose of the forms and decline to issue certifications based on a false assumption that it gives a person automatic legal status. Only USCIS can grant visas and citizenship to immigrants. She said both police departments and civilians could benefit from more trust and cooperation in the process of issuing certifications.

“Law enforcement is going to get more cooperation from the community,” if they process U-visa-related forms promptly, said Teofilo Olave. “The community is going to feel safer. And then there’s also a possibility that, if somebody has suffered a crime, maybe they will be eligible for a U visa. So maybe something good will come out of something bad.”

As of Nov. 2, Tsao said that ICIRR is working with lawmakers to update the bill’s language based on negotiations with law enforcement officials who still have concerns. Hernandez said she thinks the bill will be called for a vote this week but she needs to talk with more House members before feeling confident it will pass.