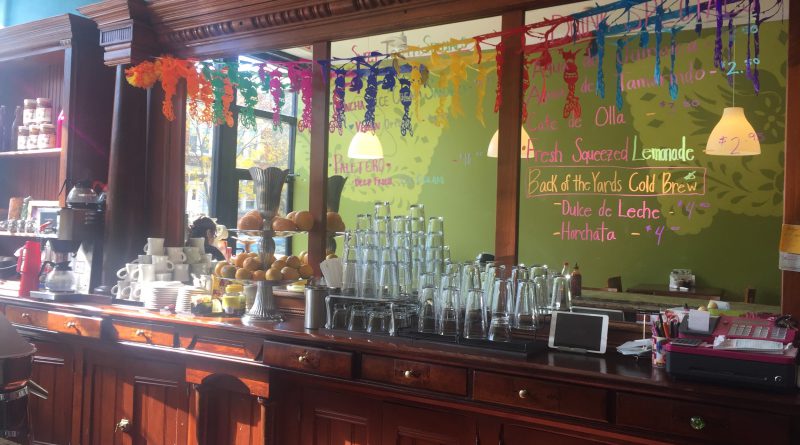 It’s early in the morning and Sonia Sauceda, a co-owner of Creperia Nuevo Leon, greets her first guests with a smile and a set of menus.

“I’ll get your coffee started!” she says, making her way behind the bar where she begins to make the first pot of the day. She scolds her two guests for not being properly dressed for the cold October wind and takes their orders. Even though she has a degree in accounting and years of business skills under her belt, Sauceda says she learned her customer service skills from the best — her father, a long-time business owner of the next door Panaderia Nuevo Leon and co-owner of the creperia business.

“Everybody loves my dad,” she says. “He’s always been a very honest business owner. He has a good foundation that he’s instilled in all of his children. He always says, ‘Always take some bread to people because they may not remember you, but they’ll remember the bread.’ He’s married an experience with a feeling. I said, ‘Dad, I learned that in marketing!’”

Panaderia Nuevo Leon has become a staple on the iconic 18th Street since it opened in 1973. Sauceda sells a variety of traditional Mexican baked goods, tortillas and beverages. Most individual pastries cost less than one dollar.

Pilsen resident Kenneth Paz, 20, moved to Chicago a couple months ago and became a regular at the panaderia.

“They have vegan pastries and they’re really good too,” he says. “I come here at least once or twice a week. I get a feeling that it’s been here for a while and it’s a family business. It’s my favorite panaderia.”

Like many immigrant stories, the one of Sonia Sauceda’s father, Abel Sauceda, 82, began across the border far from his bakery and home. A native of Nuevo Leon, Mexico, he went to work at age 14 shortly after his father passed away. While traveling around the northern region of Mexico working jobs in copper mines, he got the attention of a local baker who offered to employ him.

“The owner kept looking at me,” Abel Sauceda says in Spanish. “He asked me, ‘What can you do?’ and I said, ‘Nothing.’ He must have felt bad for me.”

At the time, Abel Sauceda’s main concern was making enough money to send back to his family in Nuevo Leon. But that moment in the bakery marked the start of Abel Sauceda’s 68-year-long career as a baker.

Over the next 18 years, he worked at several bakeries in Mexico. A friend eventually convinced him to move to the United States with his family. In Chicago, Abel Sauceda worked at a local bakery for three years before deciding that it was time to open up his own panaderia in 1973.

“I passed by here one day and it said ‘for sale,’ so I called the number on the sign,” says Sauceda. “I said, ‘I don’t have money but I have experience and I know how to run a business.’” He obtained a small business administration loan for $25,000.

Sonia Sauceda grew up living above the bakery and worked there with her three siblings throughout her teenage years.

“I’m immune to the smell of fresh bread,” she jokes. “People who pass by say they smell the bread, but my senses just don’t recognize it anymore. I can only smell it when it’s directly out of the oven.”

It was at the panaderia that Sonia Sauceda learned what it took to run a business. She worked with customers, developed relationships and learned how to ensure the quality of the baked goods. The only drawback, she says, was always being known as the boss’s kid.

That is why after getting her degree from DePaul University, Sonia Sauceda worked in corporate accounting for 15 years.

“My family has always been very in the business world with the bakery,” she says. “It became kind of second nature and I knew that somehow I’d eventually move towards opening something.”

Just 11 years after launching his own empire, her father purchased the next-door building with the hopes that one of his children would follow in his footsteps and open up their own family business in Pilsen.

“I always told them that working is good, but it doesn’t matter how much money you make at a job, there is nothing like owning your own business,” Abel Sauceda says.

The space was used for a hair salon by another one of his daughters for a couple of years before the family opened a a Mexican restaurant there. Sonia meanwhile became deeply interested in making crepes and the history of Mexican crepes, and her father encouraged her to take over the family space to open a creperia. After studying crepe recipes on her own time for two years, in June 2016 Sauceda opened Creperia Nuevo Leon.

She sees it bringing together elements of old-school and new-school Mexican culture. The tables and chairs in the creperia were made-to-order in Mexico. The space is decorated with traditional Mexican crafts known as “papel picados,” and items on the menu include Mexican-style café de olla, as well as crepes cooked with a variety of ingredients found in Mexican food — like poblano peppers.

Currently, Creperia Nuevo Leon is the only creperia in Pilsen. Sauceda says she has a diverse clientele that includes young professionals and families.

“We’ve been labeled on Google as hip, but I don’t see it that way,” she says. “It’s still very much a mom and pop place. Here you come to sit down, you take your time and eat your meal.”

Located at 1636 W. 18th St., the creperia is just blocks away from the 18th Street Pink line stop. The street has historically been lined with family restaurants and businesses, but in recent years it has undergone signs of gentrification with chain restaurants and specialty shops opening.

The family recognizes that times have changed. Artemio Casas, Abel’s son-in-law and a baker at Panaderia Nuevo Leon, said that in his more than 20 years working at the panaderia, the bread hasn’t changed but the neighborhood has.

“There are less Latinos,” Casas says in Spanish. “There are more white and other races in the neighborhood. There are few Latinos left. Latinos still come in from other places but not many left in Pilsen.” Casas adds that the bakery still has its regulars, but additional products including vegan pastries and tortillas have been added to suit the new clientele.

The family is confident they can maintain their position among local businesses in Pilsen. Sonia Sauceda hopes to increase the creperia’s business during the weekdays as well as introducing new crepe flavors to the menu.

She says her family’s business motto applies equally to both a traditional immigrant neighborhood and a hip gentrifying enclave: Do what you know well.

“We’re sticking with the same philosophy,” she says. “We’re trying to use the best ingredients when we cook and bake, trying to keep everything fresh and keep honest and fair to our prices…You have to keep strong with what your product is and people do come back.”