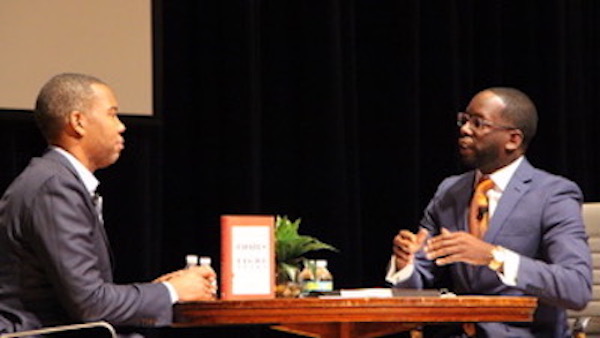 They started lining up a full three hours before the event would begin: a crowd of students, parents and Evanston residents winding down Evanston Township High School’s linoleum hallways. Event planners would find themselves quickly directing people towards overflow seating, as the auditorium filled to capacity.

On his current book tour for “We Were Eight Years in Power,” a collection of essays reflecting on the Obama presidency, author and Atlantic contributor Ta-Nehisi Coates spoke in an on-stage interview with Marcus Campbell, Ph.D, the high school principal and assistant superintendent of the district. Though their conversation touched on the singular nature of America’s first black president, Coates spoke primarily to the burden of “respectability politics,” wherein white supremacy demands the best behavior from the people it oppresses.

“It’s tough dealing with the effects of having a boot on your neck,” Coates said, referring to white supremacy. And for the oppressed, he explained, taking the time “to understand the boot, to understand what’s actually happening is, in its own way, liberating.”

That means addressing how racism has shaped policy, behavior, expectations and identity. Coates told the story of a man he once interviewed, who explained that racism keeps African Americans from having the protection of the law.

“Police were white. District attorney and prosecutors were white. Judge was white. All political officials were white. That’s no law,” Coates recounted.

The talk sparked community self-reflection especially for Evanston, an area touted for its diversity; and for this high school specifically, which is 56.7 percent persons of color. At a roundtable that took place just after the event, residents hashed out their feelings. The auditorium emptied quickly after Coates departed for a flight, leaving approximately 50 people close to the stage ready to talk, with community moderators leading the discussion.

“The comfortable narrative of this high school is: Yes, it’s diverse. Yes, we’ve done work on equity. Yes, we are changing things,” said Steven Speight, an African American teacher at Evanston Township High. “But underneath that comfortable narrative are some hard truths. The hard truth is that we have accelerated the gap between achievement of white students and nonwhite students.”

Speight has been teaching for 26 years, and still faces pushback from white parents who question his credentials and who quietly resist the school’s equity programs, he said.

“The uncomfortable narrative is that there is … a very strong silently, but loudly speaking group of mostly white parents in this community that do not want our equity work to continue forward,” he said.

Substitute teacher Dawn Johnson, who is originally from Jamaica, pointed back to Coates’ argument that public policy has historically enabled racism.

“I sub in the district and we were doing Civil Rights,” she said. “I asked seventh graders ‘Who believes that racism will one day end?’ and I was so hopeful that these young people would think that in their generation it would.”

“Most of them think it will not, because they said it passes from generation to generation,” she continued.

“So what I’m saying black people need are opportunities. We need equal access to education. We need equal access to banking. We need equal access to housing. And those are where we are excluded. So the problem is deeper than diversity…So we could sit here and you could imagine me talking to another 200-years-older generation. Talking about the same thing. But what we really need to do is look at the laws that are on the books. That’s where our big problem lies because these laws are discriminatory in their process.”

The roundtable drew together high school students frustrated by the lack of accountability for what some describe as Evanston’s racist history, and residents who recalled their own school days including forced busing and half-measures of integration.

Even the name Evanston comes with a striking racial history, dating back to the 1864 Sand Creek Massacre where roughly 150 Cheyenne and Arapaho Natives, mostly women and children, were slaughtered and mutilated by U.S. volunteer cavalry. John Evans, for whom Evanston is named, was governor at the time and resigned in disgrace after the massacre.

Students drew parallels to the ongoing national conversations surrounding Confederate monuments, which Coates touched on during the event in order to explain why quitting white supremacy is so difficult.

It’s just as hard, in Coates’ view, to fix the problems racism has created. But he concludes that there is something to be learned from those suffering the most, for example on Chicago’s South Side.

“Take people where they are,” Coates said. “People living under the boot know a lot more about the boot.”

Photo: Ta-Nehisi Coates, left, along with Principal Marcus Campbell, fields questions on racism in America and discusses his new book “We Were Eight Years in Power” for a packed auditorium at Evanston Township High School.  Photo by Rowan Lynam.