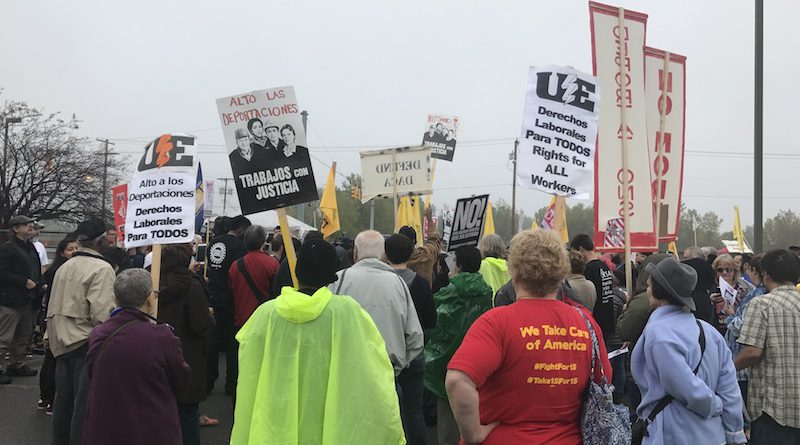 [youtube https://www.youtube.com/watch?v=qmHvDZ0Jllg&w=560&h=315]
Activists gathered to protest a deportation at Gary Airport in Indiana, where undocumented immigrants were brought in on white buses and loaded onto a plane. Over 19,000 people have been deported through this airport in the past decade.

Text and photos by Siobhan Neela-Stock
Video by Rowan Lynam

On the other side of the gate, behind a police line, a plane waited to collect its passengers at the Gary-Chicago International Airport in Indiana.

Its passengers would not be going on an island vacation. Instead, they would be shackled and pushed onto a World Atlantic plane. These passengers are undocumented immigrants and are being deported from the Gary airport.

Roughly 200 protesters gathered to express their indignation at the Friday morning deportation on October 6. Boxed into the gated parking lot by police, protesters chanted “No Más Deportaciones!” and “Defend DACA.”

DACA, an administrative program created during President Obama’s administration, allows people who were brought to the United States illegally as children to apply for protections such as temporary relief from deportation. DACA recipients can legally work, attend school and obtain a driver’s license in the United States. The program does not include a path to citizenship.

The program’s future is uncertain under the Trump administration, and the protest organizers fear DACA recipients could be future passengers on deportation flights out of Gary.

Gary was once a booming steel town but today there is little business, steel or otherwise, to be found. Fast food restaurants dot the city’s landscape and the shuttered headquarters of the Post-Tribune, which closed its doors in 2009, stands vacant with a cracked window. Gary is often cited as an example of an American city ravaged by deindustrialization. However, lesser-known is the role it plays in the region’s immigration enforcement.

As of April 2017, 19,501 people have been deported from the Gary airport. This number was obtained by Ruth Needleman, one of the protest organizers, through a Freedom of Information Act request to U.S. Immigration and Customs Enforcement (ICE).

Nicole Alberico, the ICE media officer in Chicago, said by email that she could not answer specific questions because ICE would “decline publicly discussing operational procedures or methods, including the specific use of any assets or resources assigned.” She confirmed that the Gary airport is used “to conduct removal flights,” and pointed to the ICE Air Operations fact sheet.

After leaving Gary the plane would pick up more people being deported in Kansas City, Missouri, according to Needleman, and then fly to its final destination of Brownsville, Texas, on the border with Mexico.

Fatima Garcia, 26, live-streamed the Gary protest on Facebook Live. She traveled from Sacramento, California to attend the protest and she is part of the Labor Council for Latin American Advancement, a nonprofit organization that works to empower and represent the interests of Latino/a trade unionists.

“We have a lot of solidarity amongst not only the United States but across borders as well,” Garcia said. “We definitely want to share this action and the reasons why we are here today in Indiana. We’re seeing the criminalization and separations of families throughout this nation and the ones that end up being the most affected are the children.”

Organizations representing various interests from healthcare to workers’ rights were at the protest.

Caron Range, an intern for Service Employees International Union, has been a homecare CNA for 15 years.

“I’m here to rally about deportation and immigration, I know it is not fair,” said Range, describing the fight for immigrants’ rights as one that all working people should support. “Unions, we just don’t fight just for jobs. We fight for homecare, nursing, children, patients and as you see we’re out here fighting for immigration today.”

Angela Gehm, a 64-year-old Michigan resident who attended the protest, thinks the government has betrayed DACA recipients’ trust by removing the protections promised under the administrative program.

“I feel like these young people, if all of the statistics that I’ve read about who they are and what they’re doing are true, then I just don’t see any reason why they shouldn’t be allowed to stay,” said Gehm.

The heavy police presence did not go unnoticed by protesters.

Protesters chanted, “Move that truck!” as the view of the plane was blocked by a truck with the words “Master Tile” written on the side. Less than a minute later, the truck driver drove away.

But the protesters’ view of the plane was blocked for the rest of the protest by yellow industrial trucks.

Although the protesters could not see any passengers loaded onto the plane, they saw two buses with whited-out windows drive onto the tarmac and then disappear behind the airport’s walls. The immigrants are blind to the world outside of the buses as they are transported from the Kankakee County Detention Center to the Gary airport.

As protesters left they passed a sign near the airport’s entrance that reads “The People of Gary Welcome You.”

Some protesters wondered, will DACA recipients soon join those undocumented immigrants who are “welcomed” at Gary’s airport?