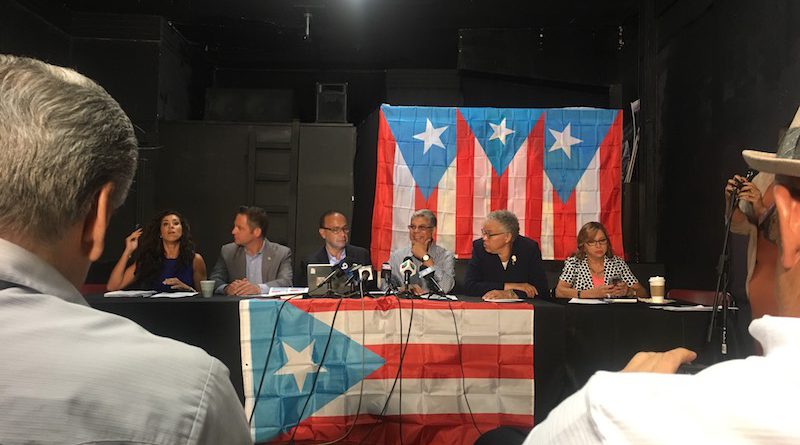 Milly Santiago has not been able to reach her mother, who is paralyzed, in Puerto Rico since Hurricane Maria pummeled the island with 155 mph hour winds last week.

Santiago is the alderman who represents the 31st ward on the Northwest Side. Her dilemma is shared by many in Chicago, where Puerto Ricans make up about 3.8 percent of the population in tight-knit communities like Humboldt Park and surrounding neighborhoods.

“It’s been excruciating for me,” said Santiago in a press conference on Sept. 21. “I pray to the Lord to allow me to see her again.”

Santiago and other Chicago elected officials came together to make a call to action after the storm, the worst to make landfall in Puerto Rico in almost a century, hit the island on September 20.

As they spoke, 100 percent of the island was without power. There were 10 confirmed fatalities, though the actual toll could be higher since the lack of power has made communication difficult. “[Puerto Ricans] are taking care of each other. Now we need to take care of them,” said Rep. Luis Gutierrez (D-Ill.) at the press conference at the UrbanTheater Company in the heart of Humboldt Park.

Joined by Ald. Roberto Maldonado, 26th, Cook County Board President Toni Preckwinkle and local organizations, a somber and teary-eyed Gutierrez put the severity of the category 4 storm in perspective.

“We have to understand the gravity of the situation,” Gutierrez said. “This is not like the electricity going out in the city of Chicago. The infrastructure [of Puerto Rico] has already been so debilitated after so many years from lack of continued support.”

President Donald Trump has officially declared Puerto Rico a disaster area, making federal funding available to affected municipalities as flash flood warnings were still in effect on the island, according to the National Hurricane Center.

Hurricane Maria and Hurricane Irma, which struck the island two weeks earlier and killed at least three people, according to reports, will likely exacerbate the island’s economic crisis.

In March, Puerto Rico filed for bankruptcy, the biggest ever filed in the U.S. according to CNN, to deal with its more than $70 billion debt.

Hurricane Irma alone caused$1 billion in damages. Because there is still no power, it is difficult to asses the damage caused by Hurricane Maria.

But the fifth strongest hurricane to hit the U.S., according to NASA, has clearly been devastating for Puerto Rico’s aging infrastructure. The island’s power plants had not gotten needed repairs because the government-owned Puerto Rico Electric Power Authority, or PREPA, the only power company in Puerto Rico, faces billions of dollars in debt. The island could be out of power for months “as opposed to weeks or days,” Gov. Ricardo Rossello told CNN.

The American Red Cross and organizations like the Chicago-based Puerto Rican Agenda are encouraging monetary donations rather than items that require transportation, since it could take up to 10 days for anything to reach the island.

“There is literally no physical way right now to get things to the island,” said Celena Roldan, CEO of the Red Cross’s Chicago branch. “This will be a long term recovery so we need to be thinking about how this community is going to do now to help fundraise and support.”

The Puerto Rican Agenda and other local organizations will be hosting a number of events to raise donations in upcoming days.

“We need to stir up the wind in Chicago. We’re known as the Windy City and we need to put that in action,” said Cristina Pacione-Zayas, co-chair of the Puerto Rican Agenda. “People were struggling prior because of the fiscal crisis, then Irma came through and now two weeks later you have Maria and so therefore, there’s no reason any of us are not doing everything we can in our power to spread the word, get the resources and mete mano,” or lend a hand.

Puerto Rican and Mexican communities in Chicago have often supported each other, from fighting for immigration rights to speaking up against inequality and discrimination in the 1970s.

Ald. Gilbert Villegas, 36th, and president of the City Council’s Latino Caucus, said that there will be an event organized to benefit Mexico and Puerto Rico at the end of the month or the first week of October, with more details to come.

The National Museum of Mexican Art and the Puerto Rican Arts Alliance have created a relief fund to help those affected by the earthquake and Hurricane Maria.

“I express and share the heartbreak for the earthquake and the devastation in Mexico, which has also impacted the city of Chicago,” said Gutierrez at the Sept. 21 press conference. “I know there will conversations about how our communities will work together.”