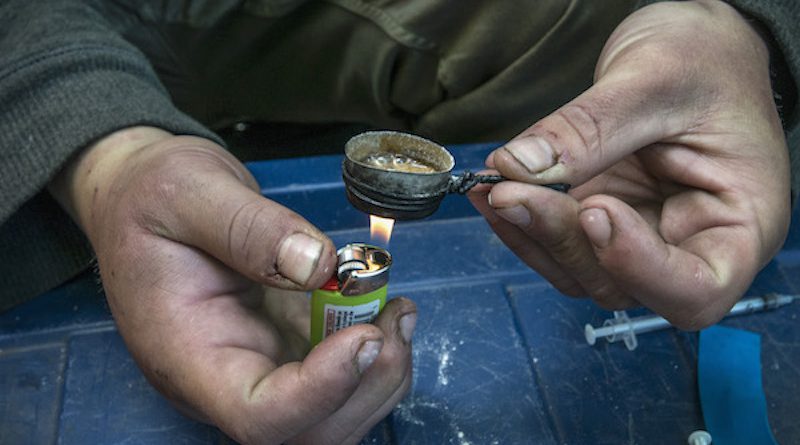 Steve Smrha began his medical career with what he thought was a reasonable goal: to help patients with drug addictions stop using drugs. “Completely sober for the rest of your life,” as Smrha described it.

But it didn’t take long for him to realize “completely sober” isn’t always possible.

Smrha works at PCC Community Wellness Center’s chemical dependency clinic in suburban Oak Park. The clinic largely serves residents from Chicago’s West Side, which has been hard-hit by the city’s opioid crisis.

Between 2015 and 2016, Chicago saw opioid overdose deaths nearly double, from 331 to 606, according to the most recent data released by the Illinois Department of Public Health. This rise was in part because of the increase of heroin laced with fentanyl, a synthetic opioid 25 to 50 times stronger than heroin.

In the face of this epidemic, doctors like Smrha have found that an abstinence-based approach to treatment is largely futile. Helping people reduce the amount of opioids they use, while helping them use more safely, is often a more realistic goal.

Medication, combined with behavioral and mental health care, is widely considered crucial to this approach. But major medications used to treat opioid dependence are themselves opioids and therefore highly regulated. Prescribers have to be cautious that patients already addicted to opioids don’t misuse them.

Smrha and several other PCC doctors have what is known as a DATA waiver.

DATA stands for the Drug Addiction Treatment Act, which Congress passed in 2000. Under the law, physicians with the waiver can prescribe certain medications that otherwise can only be prescribed in a limited number of federally certified centers focused specifically on opioid treatment.

Buprenorphine is a drug commonly prescribed by doctors who have DATA waivers. Like other opioids, it attaches to the brain’s opioid receptors. But it’s a partial opioid agonist, meaning it’s less potent than a full agonist such as heroin, leading to a similar – though weaker – euphoria. As a partial agonist, buprenorphine satisfies the body’s cravings for opioids and helps the patient taper off opioids while avoiding painful withdrawal symptoms like vomiting, fever, diarrhea, muscle aches and depression.

Buprenorphine is often combined with small amounts of naloxone, the drug used to reverse opioid overdoses. Naloxone, an opioid antagonist, blocks the brain’s opioid receptors and helps keep the body from craving more opioids. It helps balance the effects of buprenorphine when the two drugs are combined.

The most common buprenorphine-naloxone combination is called Suboxone, a prescription administered in strips that dissolve under the tongue or the inside of the cheek.

In July, Mayor Rahm Emanuel’s office announced a $700,000 investment in opioid addiction treatment, distributed across seven South and West side community health providers and the Cook County Jail. The city grant will allow five more physicians at PCC to obtain DATA waivers and the Suboxone training that comes with those waivers.

PCC uses a “team approach” to treat addiction, according to Katherine Suberlak, PCC’s chief population health officer. A prescriber – a doctor like Smrha who can prescribe Suboxone – is one member of that team. They’re joined by a social worker – called a behavioral health consultant – as well as a clinical care manager and a care coordinator.

A patient starts treatment at PCC with a three-day induction, including meeting with their care team. After that, the patient usually attends weekly meetings with the prescriber. Those meetings become less frequent over time, but the patient is encouraged to also attend weekly group therapy sessions. People struggling with addiction often experience social isolation, so group therapy is considered a useful part of treatment.

If the patient decides to attend group meetings at PCC, they might be in a group that focuses on stress management. Or they might choose one that uses yoga and guided meditation techniques as recovery tools.

Buprenorphine treatment is usually recommended for at least one and a half to two years, according to Katie McDonough, the chemical dependency clinic’s coordinator. McDonough, who has had her DATA waiver since 2011, added that longer regimens are possible, especially as more doctors think of addiction as a chronic disease like diabetes.

But patients often have to deal with more than just addiction. Many patients, for example, lack jobs and stable housing. Staying in treatment can be challenging when dealing with those other issues on top of it.

On a recent afternoon, Smrha sat in a PCC examination room across from a patient on the second day of her induction.

She told Smrha she had run out of the Suboxone he prescribed the previous day, so Smrha said he would raise the dose. But only take it all if you absolutely need it, he cautioned her.

This was her second time in treatment, she said. She tried a different treatment program two years ago, but during her six months there, she never stopped using heroin. She hoped PCC might work better, partly because of the behavioral health consultant here.

Smrha asked her if she had injected heroin since the previous day.

She had to be honest, she said: Yes.

When Smrha originally obtained his DATA waiver in 2015, his aim was to use medication to help his patients stop using opioids like heroin. Since then, he has had to adjust to the idea that treating his patients’ addiction won’t mean they all stop using. Successful treatment, he said, “is in the eye of the beholder.”

It might mean the patient is limiting themselves to $10 worth of heroin a day. It might mean they only use heroin one day a week. It might just mean they try to inject it with less risk – using clean needles, for example, or having naloxone ready if they overdose. Taking Suboxone under Smrha’s supervision might help the patient keep their heroin use under control.

This wasn’t necessarily what Smrha had in mind when he went into practice. But, he said, he’s “becoming OK” with it.

Top photo: A Chicagoan prepares to shoot up heroin. Photo by Lloyd DeGrane.