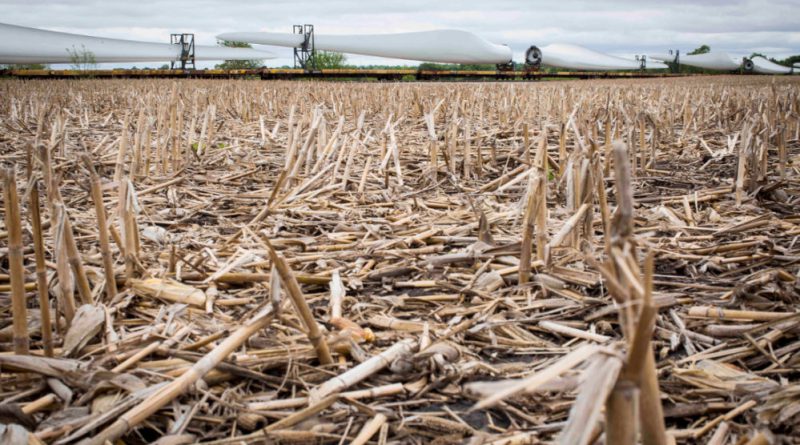 As former industrial communities seek to rebuild their economies around clean energy, two cities in the Midwest provide examples with starkly different outcomes.

Chicago’s Southeast Side and Newton, Iowa both used to house thriving industries, keeping residents with a solid toe in the middle class through well-paid and steady factory work. In Chicago it was steel, while Newton boomed under the all-encompassing attentions of the Maytag family and their washing machine factories.

Thirty years later, those core industries have left both areas and a handful of different businesses have taken their place. In Newton, the Maytag sites have been reborn to manufacture wind turbine bodies and blades. But in Chicago, the jutting land formerly housing U.S. Steel remains empty.

While urban Chicago and rural Iowa are different in obvious ways, experts say there are still common factors that influence how a green economic development transition takes place.

Greg Carlock, a climate researcher with the World Resources Institute, says that sustainable development is a wide-ranging and complicated process, but he has seen some essentials emerge. These were detailed in a study for the Brookings Institute in 2011 which found that any green development transitions require long-term commitment to incremental changes, a shared public-private vision, public support, specialization and strategies that take local context into effect.

And to understand how this plays out in real life, says Carlock, look at the local level.

“All changes are local, if you can identify these local models you have created the enabling environment for action,” he says.

Who is leading the transition – and bringing the resources?

Where the transitional plan comes from, and who has buy-in, is a significant factor. In Newton, the shock from the unexpected loss of their biggest employer pushed both local officials and community leaders to band together to find a new major employer for the area.

In contrast, the Southeast Side was just one of many areas in Chicago competing for economic development funding – and the valuable lakefront real estate is also being targeted by multiple parties for development.

U.S. Steel, the company that dominated a 369 acre site called the South Works, closed in 1992. It left an area of polluted and vacant land, one of the last few pieces of Chicago’s lakefront that was undeveloped or unclaimed. A series of development proposals has come and gone for the area, including a Solo Cup Factory and high-rise housing, to no avail.

Today there are three primary plans for developing the space. The first is the Green Economic Industrial Corridor plan, a blueprint created by the Southeast Environmental Task Force that re-imagines redevelopment of the site as including environmentally friendly businesses and residential space as well as integrating renewable energy.

The second is called the Chicago 808 Lakeshore Master Plan, a joint venture between a Spanish housing developer and a social media security platform called WELink to create apartments with up to 12,000 homes, and include extensive green spaces and gardens.

And most recently, the city of Chicago reached a deal with a developer to buy the property to convert the site into a mixed-use development which will include housing as well as manufacturing space.

These initiatives, announced over the last several years, however, are mostly stalled, moving slowly or in the very initial stages.

Alberto Rincon, a native of the Southeast Side, briefly a development intern with local alderman Sue Garza’s office and currently a graduate student at Harvard University completing a fellowship with the City of Chicago’s Mayor’s office, says he saw a lack of coordination, coherence and concreteness in these efforts that kept them from moving forward.

The stalling is also an example of the ways in which poorer neighborhoods of color, and particularly those further away from the city center, see less investment. As the Southeast Side, which is more than 70 percent Latino and majority working class, has been struggling to find a developer for the area, complicated projects with more city backing, like the development of an elevated walking trail on the wealthier and whiter Northwest Side, have moved forward.

“People don’t really know a lot about what is going on around here,” says Rincon. Unlike initiatives in other areas that have had direct mayoral backing, the Southeast Side has been working with numerous local partners but is rarely a pet project of the mayor’s office. “It’s important to collaborate because it allows communities to tap into the resources and skill-sets needed to see a project through,” says Rincon.

Carlock says that a disconnect between citizens and government is common, and unfortunate. “If the needs of the people in the area can’t be conveyed up through the political apparatus, then the incentives aren’t aligned and the will won’t be there,” he says.

In Newton, Maytag announced in 2007 that it would be selling out to Whirlpool and closing the doors of its factories, which at their peak employed one in every five people in the town of 15,000 people. The leadership of the town – both then-mayor Chaz Allen and the Newton Development Corporation, a business group – saw the need for an immediate solution.

With Iowa already a leader in wind energy, the city decided to court two companies — TPI Composites, which makes wind turbine blades, and Trinity Structural Towers. Among the incentives for the companies, which eventually settled in Newton, were Maytag’s existing infrastructure, a workforce familiar with manufacturing, the city’s willingness to help redevelop the land for TPI Composites, and the availability of state-level funds to offer training programs.

“We had the workforce and we had the access to capital,” said Frank Liebl, executive director at the Newton Development Corporation, “and it gave us confidence that this was a good place to locate.”

Carlock says having a clear economic argument for a certain type of energy or industry is also often helpful when localities are considering large investments.

“When it makes economic sense, it aligns with values because it supports people,” says Carlock. “Everyone is motivated by positive economic outcomes, particularly when there is good policy alignment and market incentives.”

In Iowa, wind energy was the obvious answer. The state creates a larger share of its electricity from wind energy than any other in the country, and its wind energy infrastructure was rapidly growing. The state also offered tax incentives for areas that were interested in transitioning to green energy. Newton was also connected to rail lines that could carry components to other markets.

“It just happened that wind energy was taking off at the time, and we were in the right place,” says Liebl. “We want to create a new workforce, and let these youngsters know there is a career in manufacturing.”

Green development in a larger city can be more complicated. In Chicago, clean energy manufacturing competes with other needs, such as those for tourist areas, nature reclamation and expanding affordable housing in an already densely populated area.

That said, Carlock says, there is “a clear global trend about where it is in the interests of global and national government to go in sustainability.”

A May 2017 report called “Sizing Up Our Region’s Green Economy,” from the University of Illinois at Chicago, found that the clean economy in the Chicago region was growing faster than other sectors, and that there were clear specialties that included energy services, lighting, and air-water purification.

On the Southeast side, access to the Calumet River for bringing materials in and out of the area, as well as a population trained to work in manufacturing settings, could make it an area particularly good for green energy manufacturing, says Rincon.

On the former U.S. Steel site, Rincon says he would like to see wind or solar manufacturing, which could be helped by the state’s recent passage of the Future Energy Jobs Act, which promises support for bringing clean energy jobs to low-income communities.

The recently elected alderman of the 10th ward, Sue Garza, knows well the need for a livelihood for the residents of the area – her father was Ed Sadlowski, legendary union activist and former director of the United Steelworkers of America. Garza, before becoming alderman, was a former public school counselor and union activist.

“Traditionally the 10th ward has always been an industrial corridor, everyone comes to bring dirty industry and landfills,” she says. “But we want no more landfills, no more toxic waste. We want something that will revitalize the whole Southeast side of the city.”

This story was produced as part of the Social Justice News Nexus fellowship at the Medill School of Journalism at Northwestern University. It was also supported by the Fund for Environmental Journalism.

Yana Kunichoff is an award-winning investigative journalist and documentary producer based in Chicago. Her work has appeared in The Guardian, The Atlantic, Fusion.net, Al Jazeera, Pacific Standard and Chicago Magazine.