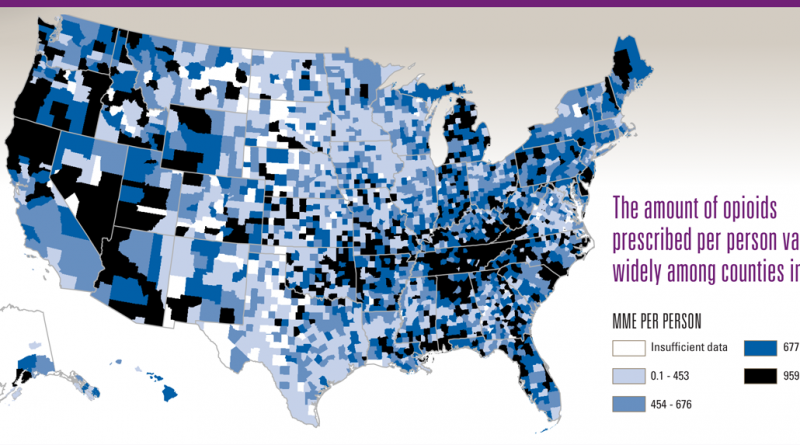 Despite a recent decline in opioid prescriptions nationally, some parts of the country continue to experience significantly higher prescribing rates than others.

Given an increase in opioid-involved death rates in recent years, particularly from the use of illicit fentanyl and heroin, experts say more work is needed to curb prescription opioids that often lead people to use heroin and other illegal opioids.

After peaking in 2010, the amount of opioids prescribed in the United States decreased through 2015, according to new data from the U.S. Centers for Disease Control and Prevention.

However, the report, featured in the July issue of CDC’s “Vital Signs,” notes that the average amount prescribed per person in 2015 – 640 morphine milligram equivalents – was still more than three times as high as the 1999 average of 180 MME.

The decrease in prescriptions is a good sign, said Andrew Kolodny, co-director of opioid policy research at Brandeis University’s Heller School for Social Policy and Management. But, he added, doctors in the U.S. “are still massively overprescribing” opioids.

The increase in prescriptions since 1999 was primarily due to the use of opioids to treat chronic non-cancer pain, the CDC report says. Since 1999, opioid-related overdose deaths and admissions for treatment of opioid use disorder have also increased.

Prescribing patterns as of 2015 varied widely among counties, the CDC data shows. The average amount of opioids prescribed per person in counties with the highest rates was six times higher than those with the lowest rates.

CDC notes several characteristics associated with counties that had higher prescription rates. They tended to be small cities or large towns; to have higher percentages of white residents; higher rates of uninsured and Medicaid-enrolled residents; greater prevalence of diabetes, arthritis and disability; and higher unemployment.

But CDC notes that these factors accounted for only about one-third of the variation among counties.

The report notes that “micropolitan” areas – cities or towns with 10,000 to 50,000 residents – may have less access to quality health care and other options for pain treatment, such as physical therapy, than residents in counties with lower opioid-prescribing rates. The report also says that residents of rural areas often go to these micropolitan communities to see doctors and pick up medication.

Robert Wergin is a practicing family physician in rural Milford, Nebraska, and past president of the American Academy of Family Physicians. He believes in treating pain, including chronic pain, with a comprehensive, “team-based” approach that ideally involves pain specialists, physical therapists and other professionals. But he said that including prescription opioids is sometimes the most realistic option for people who live in rural areas far from medical care. For example, a patient with a job and a family to care for would find it hard to travel 60 miles to see a specialist.

In those cases, Wergin uses tools provided by the AAFP to screen patients for risk of opioid misuse. Screenings take into account family and personal history of substance abuse as well as the patient’s mental health.

Wergin also talks with patients about alternative treatments and the risks of opioid misuse, and he has patients sign a pain management contract before he prescribes opioids. The contract requires patients to be drug tested, so he can check whether they are taking the prescription correctly and whether they’ve taken any drugs that were not prescribed. An absence of the prescribed opioid could indicate that the patient is selling or giving their prescription to someone else.

If the patient violates their contract, Wergin will no longer prescribe opioids for them. If he believes the patient is addicted to their prescription, he discusses it with them, helps them find an addiction specialist and continues to stay involved in their care. He often recommends opioid dependence be treated with Suboxone, a prescription medication that uses a relatively mild opioid to wean patients off stronger opioids.

Wergin acknowledges prescription opioids have fueled an addiction epidemic, and physicians may have relied too heavily on the drugs. But, he said, “We don’t want to create undue barriers in treating pain.”

In May, Scott Gottlieb, the newly appointed commissioner of the Food and Drug Administration, wrote a blog post announcing the establishment of an Opioid Policy Steering Committee. Among other things, he tasked the committee with determining whether physician education for opioid prescribing should be mandatory.

Although Wergin thinks prescriber education contributed to the recent decline in prescriptions, he said that the education should be voluntary, not mandatory. If training is mandatory for physicians to keep their licenses, it could create barriers to care, preventing doctors from treating patients in the way they feel is best, he said.

Kolodny said that education should be mandatory for providers who plan to write opioid prescriptions lasting longer than three days.

This requirement would shrink the pool of people capable of prescribing aggressively, he said. He said that a small number of doctors are responsible for the bulk of the harm, but “we’re all over-prescribing.”

“The doctors who are causing addiction are well-meaning,” he said. “They’re under-estimating how addictive these drugs are.”