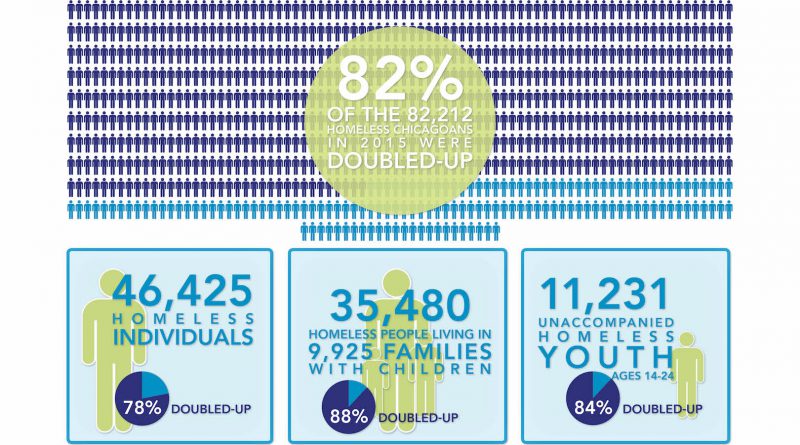 For nearly 68,000 Chicagoans, the majority of them in families with children, being homeless does not mean sleeping on the street or in a park. Their friends, neighbors and classmates might not even know they are homeless.

But they are “doubled-up,” a type of homelessness basically defined as living in crowded dwellings with extended family members or friends because of economic hardship. A recent study by the Chicago Coalition for the Homeless found more than 80 percent of the city’s homeless population living in this situation, a total of 67,582 individuals living doubled-up out of a total of 82,212 homeless people in 2015. There were almost 10,000 families living doubled up, and more than 11,000 unaccompanied youth, according to the study. More than half of the people living doubled up were African-American.

Though they might not obviously appear homeless, children growing up in such situations suffer many of the same struggles as people living outside or in other transient situations. So, the Coalition for the Homeless and city officials are stepping up their efforts to serve this population and reduce the number of families living doubled-up.

“There’s no difference between these families [and people on the streets] in terms of the reasons they become homeless or what they need,” said Julie Dworkin, policy director for the coalition. “Some of them end up going to a shelter. Some of them end up moving into someone’s house, but they’re all becoming homeless because they can’t afford their housing.”

Mitchell enjoys participating in poetry club and playing volleyball at school. She said she’s proud of her grades and is looking forward to taking an honors art class next year. But she does all this with extra challenges that her classmates may not face or understand.

Most days after school, Mitchell chooses not to head straight home, where she lives in a three-bedroom house with at least six other people, sometimes more. She sticks around school to work on homework where she can better concentrate.

“It’s hard because with so many kids in one place, it can be hard to get things done with my homework,” said Mitchell. “Mom wants to move, but we don’t know where. I want to be somewhere kind of quiet.”

Mitchell, her mother, mother’s boyfriend, her sister and her sister’s three children all live together in the small home in the Roseland neighborhood. Sometimes more than seven people live in the house at once, including friends of Mitchell’s mother when they need a place to stay due to relationship problems.

“My mom invites people who can’t stay at their houses,” Mitchell said. “Her old friends have to stay and bring their kids.”

The Chicago Coalition for the Homeless report estimated that 67,582 total individuals lived doubled-up in the city in 2015. The coalition recently created a new methodology to better assess the size of Chicago’s homeless population by calculating an unduplicated total of homeless individuals based on analysis of the Homeless Management Information System, a database that tracks people accessing homeless services, and data about doubled-up individuals from the American Community Survey of the U.S. Census.

“We think [this methodology] is really sound and much more accurate than what we’ve done in the past,” Dworkin said. “It’s something that can be replicated every year in exactly the same way, so we can really compare from year to year what homelessness looks like in Chicago.”

The coalition’s definition of homelessness includes all people considered homeless by the U.S. Department of Housing and Urban Development – people lacking a regular, adequate nighttime residence, including those living in shelters or temporary residential institutions or people in places not designed as regular sleeping accommodations. The coalition’s definition also includes those living doubled-up, as defined by the U.S. Department of Education as people sharing others’ housing due to loss of housing or economic hardship.

“This is honestly a very conservative estimate, we’ve been cautious as to who to include as doubled-up households,” said coalition intern Thomas Brown, a recent University of Chicago graduate. “In lots of cases, we decided we couldn’t assign someone as doubled-up because it didn’t look like it would be for economic reasons, but there are sometimes non-economic reasons for someone to be doubled-up, like an LGBT individual who might’ve been kicked out of the house.”

People in such situations are not included in the homeless estimate. Other exclusions include single adult children living with parents for reasons other than economic hardship, heads of households’ relatives over age 65 living with family for health reasons, grandchildren who live with grandparents claiming responsibility for their basic needs and people in institutions or group lodgings.

In conjunction with the April report, the coalition announced a collaboration with the City of Chicago in a pilot program aimed at addressing homelessness in neighborhoods with the city’s highest violence rates. This fall, the program plans to connect 100 homeless families attending Chicago Public Schools in Austin, Humboldt Park, West Englewood and Englewood with new supportive housing units.

“We know that we have an unmet need for supportive housing for individuals and families,” said Betsy Benito, director of the Illinois program at the Corporation for Supportive Housing, which is also involved in that pilot program. “We’re really excited about the 100 units to get us going to help respond to these families.”

Rent subsidies for the initiative will be funded with $1 million from the Chicago Low-Income Housing Trust Fund, and the city’s 4 percent surcharge on AirBnB rentals will fund supportive services for the families. Dworkin said the next phase of the campaign will include working with the Chicago Housing Authority – which oversees public and subsidized housing – on addressing homelessness.