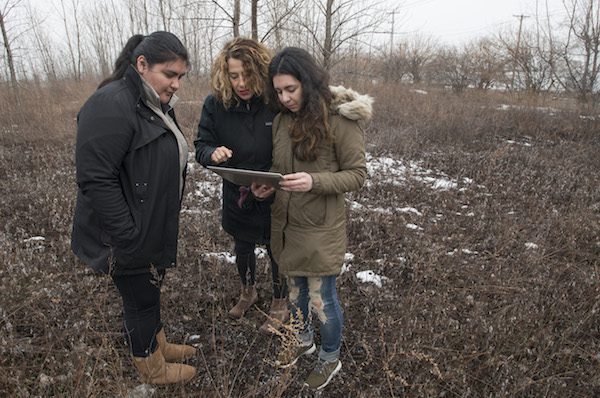 Undergraduate public health students at the University of Illinois at Chicago (UIC) have been working with Bruce Montgomery, the Director of the Urban Innovation Center, to find suitable sites for solar farms in Englewood and Bronzeville. Many of the vacant lots in the community are former industrial sites, or brownfields, and potentially contaminated with toxic chemicals or waste.

“There are large amounts of land that are underutilized in urban communities, especially in Englewood. It’s very difficult to bring those properties back to productive use because before anyone can do it, they’ve got to clean up what was there before,” Montgomery said.

Montgomery is working with the community to create micro-grid solar farms. Community members could also be trained in maintaining and operating the panels, he said. And on sunny days when the panels generate excess energy, it can flow back to the grid, reverse the meter, and create new sources of income for the community, he said.

“These communities are low income, so they wouldn’t just have a few thousand dollars to just go off and put solar up on their roof. The idea is that you could identify one of these brownfields and populate it with solar,” Montgomery said. “The solar energy can be produced and shared in the surrounding homes, and in the first time in forever, these residents would be something other than a rate payer, they could be an energy producer.”

UIC School of Public Health students are involved with the project as part of “Public Health 360: Local Citizenship and Community Health Initiatives,” taught by Dr. Laurel Berman, an adjunct assistant professor who got her doctorate at the school in 2006, and Dr. Serap Erdal, associate professor of environmental and occupational health sciences at the school. The course gets the students out in the community where they can apply what they’ve learned in the classroom.

Velazquez and the other members of her group–Melissa León, Feliciano Ocegueda, and Jamie Danemayer–have been working with the Urban Innovation Center to map the area’s vacant lots and determine what clean-up might be needed before the sites can be used for solar farms. Later in the semester, the group will introduce their findings and explain the benefits of urban solar farms and other energy innovation projects at a community meeting.

Students learn the history of the vacant sites by speaking with community members and nonprofits, and researching local and state databases, Berman said. The site history gives them an idea of what clean-up is needed before the site can be safely used for other purposes.

“With properties like this, sometimes there’s no contamination. I think an estimate would be about 30 percent are not contaminated. So, brownfields are an opportunity for redevelopment,” Berman said.

The urban solar project is just in the initial stages, but with community buy-in, an agreement with the local energy provider, and sufficient funding, it could become a reality.

In addition to the urban solar project, Berman and Erdal are managing 12 other student projects focused on community health, social, and environmental issues. Many are in communities on Chicago’s South Side.

“Cheryl Johnson is following in her mother’s footsteps,” Erdal said. “Our students are helping her turn projects into reality. The work also has a larger significance, because People for Community Recovery has prominence nationally [in the history of environmental justice].”

Some of the projects focus on turning vacant land into healthy, usable space or housing, and others are working with those experiencing homelessness. One group has partnered with the Southeast Environmental Task Force on the city’s Southeast side to establish a database tracking the activities surrounding petcoke, a potentially toxic byproduct of the petroleum refining process. All of the projects engage students with the health and environmental issues affecting their local communities.

“We tell them from day one that they will be working with communities, applying what they are learning in the class in the field,” Berman said. “The students know that this is just a first stab—it takes years to build relationships in communities, but we are getting them to think about it early.”

This story was originally published in the Healthviews magazine published by UIC. Janice Cantieri is a graduate of Medill’s MSJ program. Lloyd DeGrane is a Social Justice News Nexus fellow.