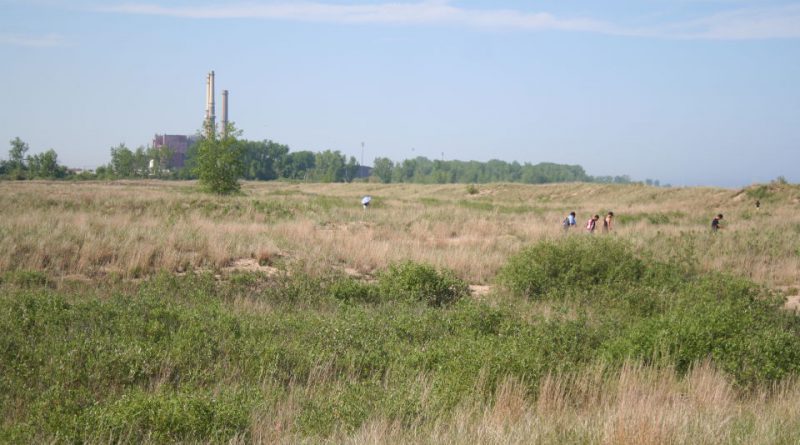 SJNN fellow Kevin Stark has spent the spring exploring the intersection of politics, energy, immigration and change in Waukegan, Illinois — and has produced not one but two companion pieces, for Latino USA and Pacific Standard. A teaser follows below …

Julio Guzman is a recent college graduate, and he’s recently returned home to Waukegan, Illinois. He loves the city, and he wants to be involved. For him, that means fighting for clean energy. He and a group of environmentalists have been tussling with local officials over the future of a coal fired power plant.

“It is hardly a fight to close the coal plant,” he said. “That is the trajectory of coal in the U.S. It will close itself. We want to be proactive and have a plan when that does happen.”

Guzman is up against NRG Energy, one of America’s biggest independent energy providers. The company operates the plant in Waukegan. Guzman and a group of environmentalists want it to stop burning fossil fuel, saying it’s dirty and harmful. It’s best to transition now.

The company says it’s in compliance and the plant is profitable, and a coal plant can’t just transform into a solar farm. A company spokesperson said: “It’s like comparing a car to a shoe. They are two different things.”

Waukegan, a short drive from Chicago on Lake Michigan, is no stranger to environmental fights. In the 1970s, it was discovered that PCB-containing hydraulic fluid had leaked out of a boat motor manufacturing plant and contaminated a local harbor. It had the highest concentrations of the pollutant anywhere in the world.

The city is just now turning the corner after decades of cleanups. During which many people immigrated to Waukegan from Mexico, Honduras, and other places in Central America. Guzman and others want a fresh start for the city and have been pressuring Mayor Wayne Motley to tip the scale.

Waukegan is also known for a brand of bare knuckle politics. Some call it the Waukegan Way. With Mayor Motley up for reelection, the environmentalists have thrown their weight behind his competitor, Lisa May, an alderman. They say the coal plant’s future and clean energy are too important.

Celeste Flores, an organizer, says: “We will turn this into a campaign issue.”

To hear and read more on Waukegan’s struggle for clean energy, see Kevin Stark’s pair of features for Latino USA and Pacific Standard.