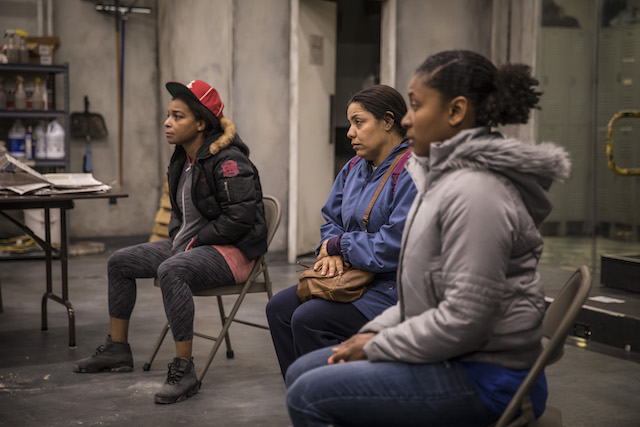 Since at least the Industrial Revolution, it’s been well-known that employers exploit workers’ bodies, profiting off their back-breaking labor in stockyards, factories, railroads and the like. In today’s economy, the service industry and temporary labor sector that make up a bulk of working class jobs also insidiously exploit workers’ internal lives and emotions, calling them “team members” or “associates” and proffering ideals of personal responsibility and achievement, even as workers labor at tasks perhaps even more demeaning and less intellectually stimulating than in days of yore.

Working on temporary contracts without unions to protect them, contemporary workers are kept in a constant state of instability and anxiety, pressured to comply and please rather than fight for their rights because employers are all too willing and able to replace them, often with simply a call to the temp agency that pays them after taking a cut themselves.

Writer and director Alexander Zeldin makes points along these lines in an interview displayed at the Lookingglass Theatre in Chicago, where his play Beyond Caring runs through May 7.

The significance of internal exploitation comes through painfully and powerfully in the performance, which follows four temporary employees working the graveyard janitorial shift at a bleak sausage factory.

Zeldin developed the play in the United Kingdom about that country’s temporary labor force.

The Chicago production was developed by Zeldin and Lookingglass co-founder David Schwimmer (of Friends fame) through conversations with temporary workers and advocacy groups, including the Chicago Workers Collaborative, and site visits to staffing agencies, factories and plants where workers were assigned.

Lookingglass offered hundreds of no-cost seats to workers and their families in collaboration with partners including the Chicago Urban League, Latino Union, Latinos Progresando and Women Employed, and the theater is also hosting postshow discussions with members and leaders of these organizations, as well as with journalists who cover labor and workers rights.

Zeldin noted that in the U.S., moreso than in England, temporary labor is clearly and inherently all about race. 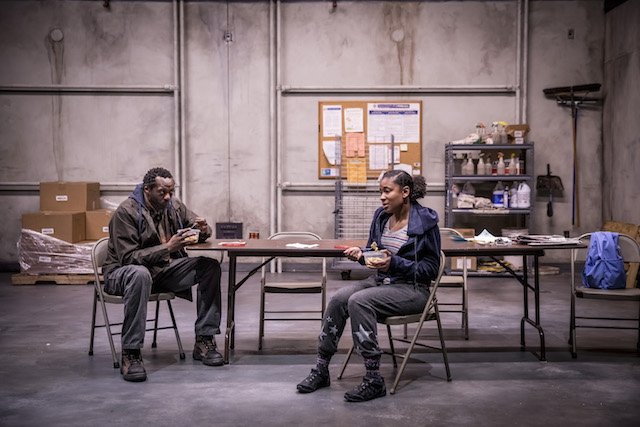 In the Chicago production, two of the women, a 23-year-old African American named Ebony and a Latina immigrant named Sonia, are eager to work and valiantly attempt to be cheerful and positive, but end up emotionally and physically broken by the exhausting minimum wage work.

Another African American woman, Tracy, maintains an insolent and sarcastic attitude that seems to provide a shield against the dehumanizing toil and the insulting presence of the young white manager flaunting his power on the proverbial second rung up from the bottom. But ultimately it is Tracy who most agonizingly implodes from the hurt, frustration and alienation suppressed beneath her tough shield.

Meanwhile Phil, a 50-something African American man with a penchant for reading and David Attenborough nature programs, is in that all-too-common situation of being a “temporary” worker in the same workplace for years, without accruing any of the seniority or benefits that should seemingly go along with the tenure.

Among the most heartbreaking moments of the play are when the workers forge tentative bonds of solidarity and friendship, only to betray and abandon each other under the pressures of exhaustion, sleep deprivation and fear of losing the terrible jobs that they nonetheless badly need.

The play is temp work and workers boiled down to the most harsh and desperate elements. Dialogue is sparse; much is revealed by body language and facial expressions during heavy silences. Missing are the more mundane stretches, moments of levity and acts of resistance or collective organizing that also thankfully characterize most workplaces.

But even if it is not a comprehensive portrait, the starkness of the performance gets right to the cold, desolate heart of such labor economies. And while the plot leaves the workers beaten down and humiliated, the poetic laying bare of these dynamics still feels somehow like an act of hope and resistance.

Beyond Caring runs through May 7, and includes post-performance discussions on April 23, April 30, May 3 and May 7 with guests including journalists, labor advocates and organizers. The May 3 talk, moderated by Chicago Humanities Festival Associate Artistic Director Alison Cuddy, features ProPublica Illinois editor in chief Louise Kiernan, Invisible Institute’s Alison Flowers, and WBEZ reporter Natalie Moore. See here for a full schedule.