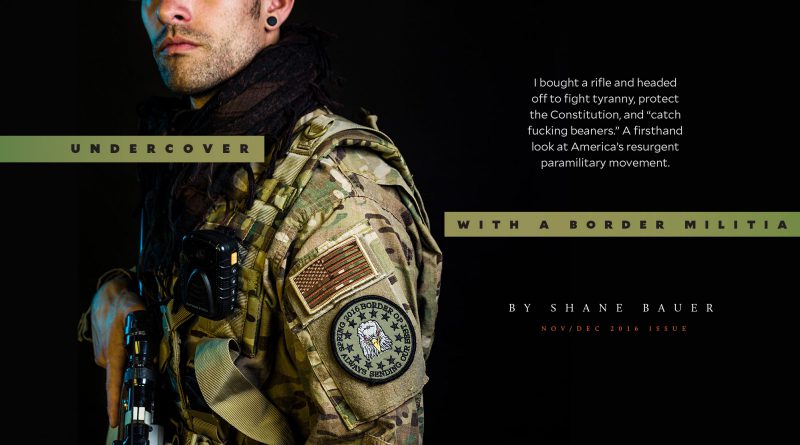 When award-winning Mother Jones senior reporter Shane Bauer returned from reporting inside a private prison facility in Louisiana, he found himself restless back in California. While editors and lawyers at Mother Jones fact-checked, and tightly sealed every inch of “My Four Months as a Private Prison Guard,” Bauer dug into another corner of American society often left in the shadows: border militias.

Bauer knew that following the election of President Barack Obama in 2008, membership in militia groups — armed anti-government patriotic paramilitary organizations — spiked. The prominent militia movement of the 1990s had resurfaced, albeit in a slightly different form. But, Bauer was surprised to see militia organizations in every state. The Southern Poverty Law Center reported 623 active militia groups in the United States in 2016.

So, Bauer started his investigation from home. He set up a new Facebook account, and joined every militia group in California he could find. He targeted the Three Percenters, or 3%ers, a militia group that pledges to defend the US constitution against perceived threats by the US government. Founded in 2008 and modeled after an alleged 3% of the American population that participated as combatants during the Revolutionary War, the group sends operations to patrol the US/Mexico border for people crossing without required travel documents.

Although Bauer wasn’t planning a second major undercover investigation in one year, when the 3%ers invited him to their US/Mexico border operation, he could not resist. With the support of Mother Jones, Bauer joined the 3%ers at the US/Mexico border in Nogales, Arizona, in April 2016, dressed in camouflage and armed with a rifle, a radio, a discrete camera, and a notebook.

“Undercover with a Border Militia,” was published in the Nov/Dec 2016 issue of Mother Jones. Highlighting the inner-workings of the 3%ers, the investigation reveals close relationships between border militias and the US border patrol and highlights the anti-immigrant and misogynist culture dominant within its ranks. The investigation also explores the prominence of US veterans within the militia, and the possible sense of purpose and belonging militia groups provide an often neglected sector of society.

An interview with Bauer on February 21, 2017 offers a look inside the investigation. Touching on security issues when covering far-right organizations and the challenges of writing dynamic narratives of complex subjects, Bauer explains his process and insights along the way. The interview was conducted by phone, and has been edited for clarity.

What compelled you to do a story on militias in 2016? How long were you following border militias before deciding to do this story?

I wouldn’t say I had been looking into militias for very long. I had paid attention to recent news, like the Bundy Ranch occupation a couple of years ago, where some militias and sympathizers took over the ranch in Nevada. Those things made me curious about the shape of the militia movement today.

I did all the reporting for this story before the private prison story was released. I was writing and doing lots of rounds of edits and fact-checking, but there was a long period it (the private prison story) was stuck in legal review, and I was getting really restless. I wanted to do something else in the meantime, and I wasn’t sure what that story was going to be. I just started poking around and brainstorming and in that process, I was searching around in militia stuff. I was surprised to find that every state had at least one militia, usually several. The movement was bigger than I realized. There was really nothing that deals with the movement after the ‘90s. So, I started by doing a lot of online research. I had the idea early on in that process to try to join one of them.

After completing the private prison story, did you know you would do undercover reporting again?

It seemed pretty ripe for that approach. I’m mostly interested in immersion journalism, which doesn’t necessarily have to be undercover, but it depends on the topic. I felt like I had to wrap it up before the prison story came out because I was worried it would expose me. I joined California militias and had been inside those groups for some months. I didn’t know I would go down to the border. One day I saw this post about a border operation. I said I wanted to go and they invited me. I went to the border in April 2016.

What kind of security training did you do to prepare? Did you work with anyone or group to prepare you on how to immerse yourself with these types of groups?

Not really. I bought a rifle, did weapons training, and went to the range. Initially, I had wanted to join this group I found in Texas. But, I was feeling really uneasy about it —just to go to Texas and jump right in. I ended up not doing that, and joined these groups in California. It felt less intimidating joining a group around here than going off to some far-off place. Those trainings were my preparation for going out on the operation in the desert. By that time, I knew the language with these groups. I was familiar with their tactics. It wouldn’t look like I was a total rookie.

What challenges stand out in this investigation?

In writing the private prison story, it was easier to make three dimensional characters. Being on this border operation, I didn’t get a lot of sense of who these guys were outside of the border. I tried to get at why they were there, but there was just so much rhetoric. I spent a lot of time later on their Facebook pages, going through their history and trying to find any little tidbits that I could use as details. There wasn’t much. These guys just post memes. So that was challenging. I didn’t want to just make a caricature of them, so I did as best I could with what I had.

As far as reporting, going on that border operation was stressful. There was a chance I could have been injured in the prison story. They would be angry if they caught me. Maybe I would get sued. But, the militia felt a lot more unpredictable. That was really stressful. But, by the time I got there, I felt OK about it.

At this point in your career, what do you have to tell your editor to get the green light on a story like this?

This story required far more extensive preparation than the prison story. The prison story was more about dealing with insurance. But with the militia story, my editors were having to trust my gut on it. I was joining this paramilitary group. It’s an obviously scary thing to do. So, they were cautious. It didn’t take a lot to convince them of the project generally. It was more about how I was joining these groups and how prepared I was. They slowed things down a bit, which I think was a good thing. But, by the time the Arizona opportunity came up, they were sold on it immediately. It seemed like an obvious good story. And I already had been involved for a few months with the California militias.

After the CCA story, I think for all of us, this story felt like a much lighter lift. It was still a 12,000-word story, but after a 35,000-word story, that seemed pretty short and we weren’t under the threat of lawsuits.

What has been the most surprising response or push back?

I was surprised at the positive response from militia members on Facebook. Some of the people unfriended me right away. But militia movement members discussed it widely, including members that weren’t at the border. I think some people thought they looked badass. I think some of them thought it was fair. I was surprised. I thought they would hate it. There were some reactions that were like, “Oh, he was trying to make us look stupid, but actually we look really good.” And I was like, “Oh, I was trying to be fair, but I think you do look pretty scary and I think people are going to read that.” Before Mother Jones published it, I reached out to all the people in the story, told them I was a journalist and that I wanted to interview them. I think five of them agreed including the leader of the militia.

One of the guys from the California state militia said something like, “Oh, that’s why you disappeared so quickly!” He was like, “I wish you had just come to me and asked for an interview, but I guess this is real journalism.” He said, “We have nothing to hide, so I’m happy to talk to you.”

Did anyone in your life—either your editors, people you work with, or your family—encourage you to do a lighter story?

Not my editors or work-related people. When I told my wife, Sarah, that I wanted to do the militia thing, she wasn’t super psyched about it. It freaked her out a little bit. But, no one was surprised.

Do you think it will be more difficult now, after the CCA story and the militia story, to continue to do undercover reporting?

I don’t think it really changes anything. It still comes down to whether people Google me or not. I don’t think people know the names of journalists. So, I’m not really worried about that. There are going to be times when I may try to do a project, and someone figures out what I’m up to and I’m not able to do it, but that has always been the risk. I don’t think anything changes really.

What is next for you?

I’m writing a book on the private prison project, so I’m actually on leave from Mother Jones right now. I’m doing a lot of historical research and adding a historical component to it. I’m just trying to focus on this. It’s really interesting.