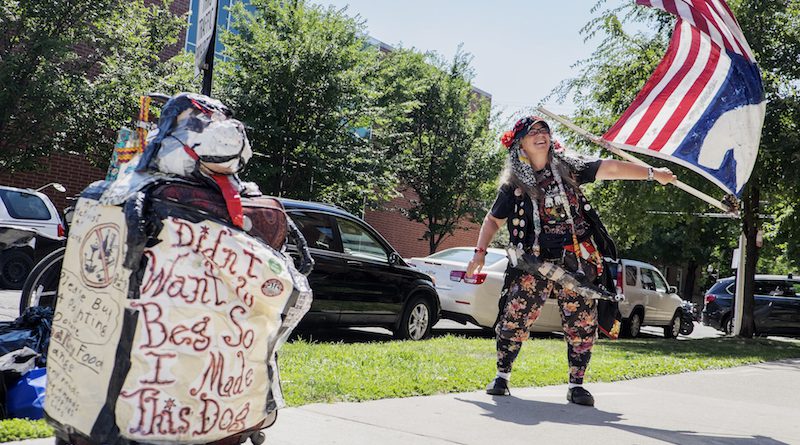 Near the entrance of an art festival in Chicago’s Southport neighborhood, a woman clad in floral pants dragged a suitcase that had a paper sculpture of a dog attached to it. Passers-by stared at her luggage which was plastered with a hand-made sign that read, “Didn’t want to beg so I made this dog.” The woman, who set up a table she could paint on, was 59-year-old Betsy Benefield— the “anartist,” as she likes to call herself.

Benefield, an activist who makes a living selling art on the street, is one of millions of Americans who live with depression, anxiety and post-traumatic stress disorder. Benefield, who uses her art as a form of therapy, is a beneficiary of Thresholds, a local organization that counsels and helps people with mental illnesses.

“She has her ups and downs,” said Patricia Staeth who became Benefield’s friend after meeting her on a bus. Staeth said that Benefield, who had once been homeless, sometimes gets “depressed because of politics” and “trying to make a living on the street.”

But mental illness is not one dimensional, and neither are the lives of people who have it. “Anartist,” a hybrid term for “activist” and “artist” that Benefield invented, perfectly describes who she is. Almost every day for five years, Benefield has been selling art around the city and trying to form a union of street artists and panhandlers. She walks around downtown with her iconic art cart and talks to street performers about artists’ rights. When she is not painting or recruiting people to her Facebook group “Chicago Street Artists and Panhandlers United,” Benefield is showing solidarity at protests, waving her American flag, which has a dove painted over the area where stars are supposed to be.

Mental illness, especially of those who have experienced homelessness, is still stigmatized, according to Emily Moen, spokesperson for Thresholds. Benefield is at the receiving end of this. Sometimes, she gets ridiculed for how she acts and lives, which triggers depressive episodes, she said. “I get a way out of it [depression], but it doesn’t mean I don’t have moments where I’m in depression to the point where I’m crying, mourning like something, someone died over a memory of something,” said Benefield. People who have mental illness have their highs and lows. But they are more than their mental state. They can be creative individuals who inspire change like Benefield.