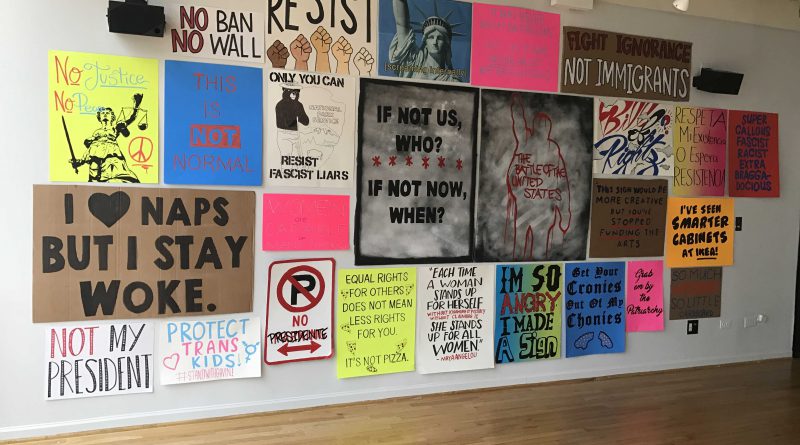 “Once that microphone’s in front of us, we become the definition of dominance. Every word we write, every word we say, is powered with creativity, strength, invincibility and rage. No stereotypes, no gender roles, no 45th president will break us!…We are Yollocalli!”

These words resonate loud and clear through one of pavilions at the National Museum of Mexican Art where the Best of Yollo exhibition has been displayed.

With all the hate currently being spread since Donald Trump’s election — in schools, restaurants, stores, and even just walking down the street — youth have raised their voices in different manners and on different platforms, because they have a message to the world.

Yollocalli Arts Reach is a youth initiative of the National Museum of Mexican Art, that has cultivated art programs for youth since 1997. Last year was the first time that the Best of Yollo exhibition happened at the museum. According to Whitney Ross, youth development adviser at Yollocalli, last year it was a huge success so they planned to make it an annual spring event.

The Best of Yollo Exhibition, 2017 Edition, is an exhibition where half the work is produced naturally by students during the programming year and the other half was submitted specifically related to this year’s theme: political issues affecting youth. 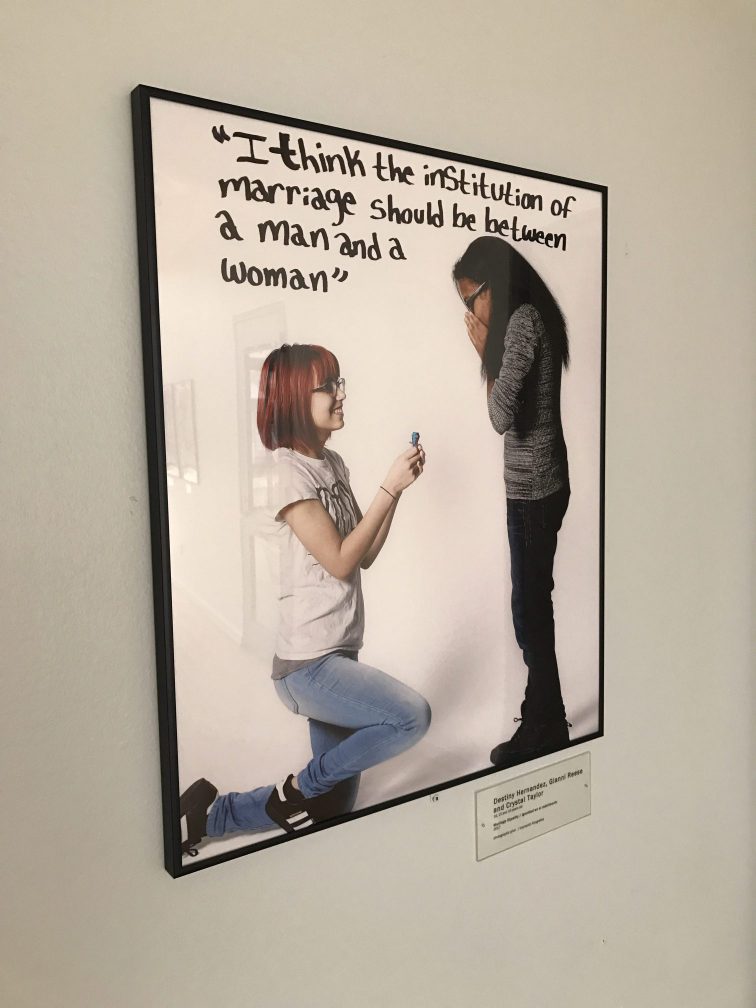 Organically arranged, there is one whole wall put together by the Street Art Students: phrases, empowering messages and colorful images.  “The wall highlights a lot of the protests and issues that have been happening from the Women’s March to the protests at the airport from the immigration ban,” Ross said.

A strong quote that we can read from one of the artworks is: “IF NOT US, WHO? IF NOT NOW, WHEN?” This quote was said by President John F. Kennedy and it represents the disappointment of youth with the current president. Since most of the teens didn’t have a voice in the last election because of their age, they are prepping the path for the next elections; aware about the future, they are raising their voices as youth and they are getting ready to vote.

Alejandro Colunga is an 18-year-old student from the Street Art Class and part of The Yollocalli’s Youth Council. The protest posters have touched and motivated him, as he mentioned, “They gave me a sense of hope because I knew kids my age weren’t idiots and had the same beliefs as me.”

Many people probably think that young people just sit in the couch, on their phones, and don’t take into consideration any social justice matter, he said. “But, we actually do take action,”  Colunga added. “I was also at the protest and I saw a lot of these signs and how moving they were to specific people. Also, how fun and artistic it can be to express yourself and show a message in a creative way. I thought it was really cool.”

Giving space to youth empowerment is essential, social matters are essential, he continued. “It just seemed like we can’t have a show all about young people in 2017, and not talk about what’s been happening lately in the country,” Ross added.  The exhibition used different platforms to project that voice.

The students from Your Story, Your Way Class, a Yollocalli audio production and storytelling program, made a powerful audio-story titled: We Are Yollocalli! (Listen to the audio piece here: https://soundcloud.com/yollocalli/we-are-yollocalli).

The audio piece contains political statements about who and what minorities are; how others identify and perceive youth because of what color skin they have, their language, religion and sexual orientation and especially by what stereotypes are said about them. The youth  embrace their identity, saying: “No walls will stop us, no laws will silence us, no white privileges are needed here to succeed!”

Indeed, the students make it clear that they are not going to let anybody classify them. They let them know that they are creative young students who can do anything and not be judged by their appearance.

Ross said the exhibit will now be an annual event.  “That is like validation to what we’re doing here, to what the young people have to say,” she said. “That everyone knows that it is worth seeing in a bigger place than just here, and students get to show that off. Especially, so that students can see that they are legitimate  artists.”

“I’m mostly excited to see my own work in a museum again and see other’s people’s reactions to the art we produced, because that’s always fun to see. I’m also excited to see how many people show up. Last year it was really big.  And I’m just curious to see if we’re able to match that same exact enthusiasm this year,” Colunga said.

The Best of Yollo Exhibition will be displayed at the National Museum of Mexican Art from March 24 to August 13, 2017.