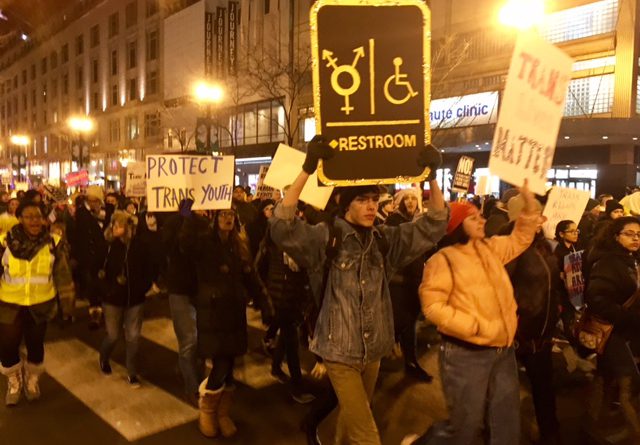 On February 21, President Trump revoked Obama-era protections that allowed transgender students in public schools to use the bathrooms that correspond with their gender identity. This policy shift came on the heels of a year that has been exceptionally deadly for trans people: since the beginning of 2017, at least seven trans women of color have been murdered around the country.

These events have sparked protests around the country, including a March 3 march in Chicago that drew over 1,000 participants.

“The death of one trans person is one too many,” said LaSaia Wade, who organized the Chicago march.

Amid chants of “Black trans lives matter!” and “Protect trans youth!” protestors gathered at the corner of Wacker and Wabash in downtown Chicago to rally around speakers before they took to the streets. As the Trump Tower loomed over them, trans women and men of color spoke to the crowd about issues as diverse as the lives of undocumented immigrants and the criminalization of sex workers.

Reginald Sawyer is a two-spirit person and president of the Chicago Two-Spirit Society. “Two-spirit” is a term used to describe Native people who are LGBTQIA+. Sawyer spoke about the recent murder of Jamie Lee Wounded Arrow, a Native trans woman.

The march was planned and conducted by trans people for trans people, which organizers said was important. A February 25 march in Lakeview organized by white, cisgender men drew criticism for its failure to involve trans individuals in the organizing or adequately represent them, as critics saw it. The criticism tapped into a long-standing issue wherein many LGBT people of color say they do not feel welcomed or comfortable in the Boystown community in Lakeview.

“Our march is about showing visibility: making a loud enough noise so other people see that we’re here and we can do the work ourselves,” Wade said. “And demanding resources to get the work done so we can do it ourselves.”

The march was hardly homogeneous: protestors of color intermingled with white protestors, disabled protesters with able-bodied protesters. The cisgender protesters who were present largely took on support roles, aware that the night was dedicated trans rights and the trans experience.

Wade emphasized that her march would be welcoming of all people “on the spectrum of transness,” noting that individuals who are not cis-passing — who do not resemble cisgender individuals in their gender presentation — are frequently left out of conversations about transgender rights. Additionally, the needs of trans people of color, disabled trans people, and trans people of size would be prioritized, she said.

“Our goal is full liberation for all trans people,” said Jacob Record, who organized the march with Wade. “Now realistically I know that won’t happen overnight, but I really hope every trans person in the crowd feels like this is their movement.”

As protesters flooded the streets demanding trans liberation, onlookers snapped photographs — some even joined in the chants.

Photo at top: Protestors march through the Chicago loop in defense of trans rights (Frumkin/Medill)