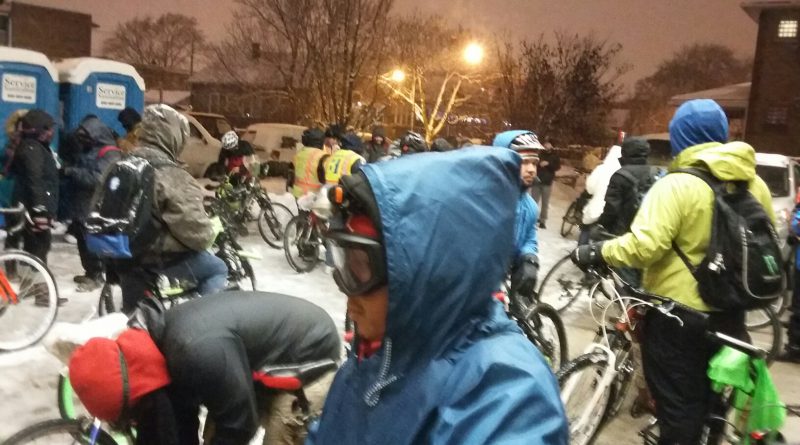 Have you ever biked at below zero in a snow storm for more than two hours? Everyone at this point might think it is extremely crazy to bike in those conditions.

Well, here in Chicago dozens of devoted Mexicans and Latin Americans did exactly this, gathering up their energy and faith together to see Our Lady Of Guadalupe.

At the beginning of every year, many Mexicans make a petition to the Virgin. Some ask for the Virgin to make their babies healthy during pregnancy and when they’re born; others ask for their family members to be well; and many even ask for an immigration reform. For hearing their pleas, they promise to visit the Virgin — Our Lady of Guadalupe —  every December 12.

It has been almost 500 years since the miracle of Our Lady of Guadalupe and her appearance on Juan Diego’s tilma (a traditional mantle) at la Basílica de Guadalupe in el Cerrito de Tepeyac in Mexico City. Today Juan Diego’s tilma still remains intact, as if no years had passed.

Thousands of people go visit the Virgin in Mexico City every year. But those who can’t go to Mexico have their very own sanctuaries where they can go visit her wherever they are in the world, including in the Chicago area. 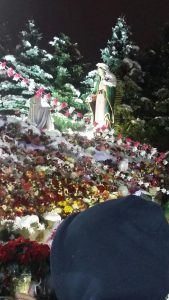 It was December, so Juan Diego knew there couldn’t possibly be flowers. But when he got there he found dozens of flowers planted and then went to show the flowers to the bishop. Therefore, when everyone goes to visit La Madre de los Mexicanos/ the Mother of all Mexicans, they bring her flowers as a gift. When Juan Diego showed the bishop the flowers he had gathered in his tilma, a miracle occurred. As the flowers fell down, the image of Our Lady of Guadalupe appeared on the tilma. The bishop was stunned. Indeed, it was a miracle. And she was named Our Lady of Guadalupe, Mother of all Mexicans.

Here in Chicago, dozens of Catholics go visit Our Lady of Guadalupe at North River Road, in Des Plaines, Illinois every December 12. The sanctuary is called The Shrine Of Our Lady Of Guadalupe.

The pilgrims go in cars, walking and on bikes too. This winter, I had the chance to go on this journey with the cyclists. The experience was amazing.

It was as if it wasn’t December. The love and faith of everyone made me feel warm. The pilgrims met up at a church and from there many groups of cyclists joined and headed to The Shrine. We were on bikes for more than two hours — about 20 miles through the snow. 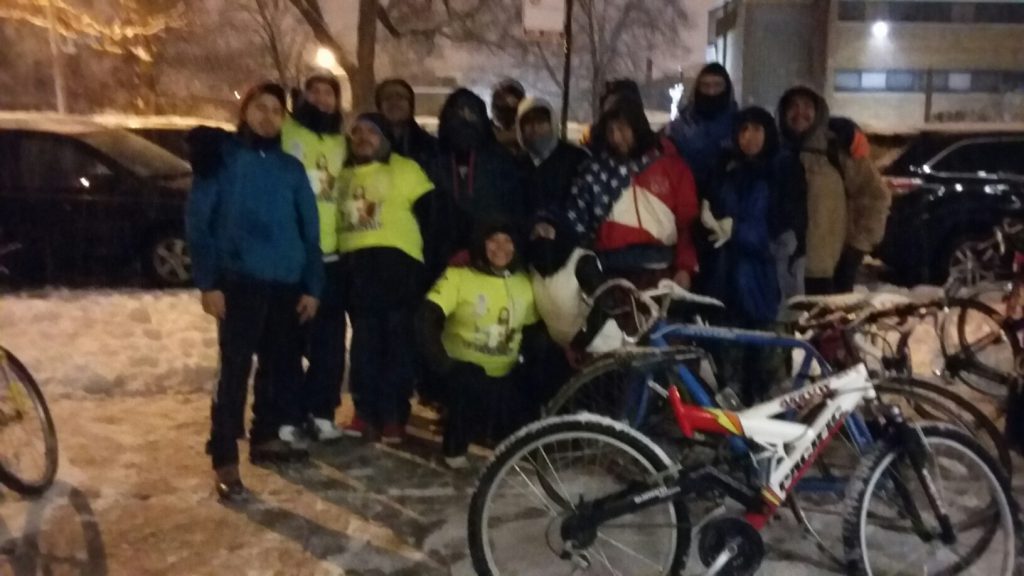 People from all over were there. Cesar Mora from Maravatío, Michoacán said, “I’ve always gone to la Basílica de Guadalupe in Mexico City. It’s a tradition. Everyone goes to show the faith we have for Our Lady of Guadalupe.”

This was his first year with his father and family making the pilgrimage on bikes. The weather was indeed different, but, he said, “The cold won’t stop us from going to see Our Lady of Guadalupe.” He also was representing a church from his hometown which is named San Miguel Curahuango.

It takes approximately two to three months to organize the event, according to organizer Cesar Padilla.

“This year was a bit harder because in reality we waited until the last  minute because of the snow storm,” he said. “So, we didn’t know we were going to come. But thanks to the Virgin, the snow storm stopped. And look, here we are.”

Fifteen years ago, Padilla started organizing this event with only 15 people.

“Between my cousins and family we would come, and then little by little more people came by with us,” Padilla explained. “Last year approximately 300 people came.”

“For me to be a pilgrim is something really important, because just like the majority of all the people, for us it is to come and be thankful to the Virgin for all the blessings we had throughout the whole year. Therefore, I think it’s definitely the faith and how thankful we are to come in front of the Shrine.”

He said he started the tradition of biking to the Shrine in Des Plaines because “It’s a tradition that we follow since Mexico. In Mexico, pilgrims go walking, on cars, on horses and on bikes. We wanted to make this tradition to come on bike every year, to use our very own energy to see Our Lady Of Guadalupe here in Chicago. And people have responded well to this tradition. Spiritually, the pilgrims felt really good.”

“Personally it fills me with a lot of vitality and faith to come here and recharge the faith that we for some reason lose during the year,” Padilla continued. “Just like we recharge our body with energy, to return back home biking.”