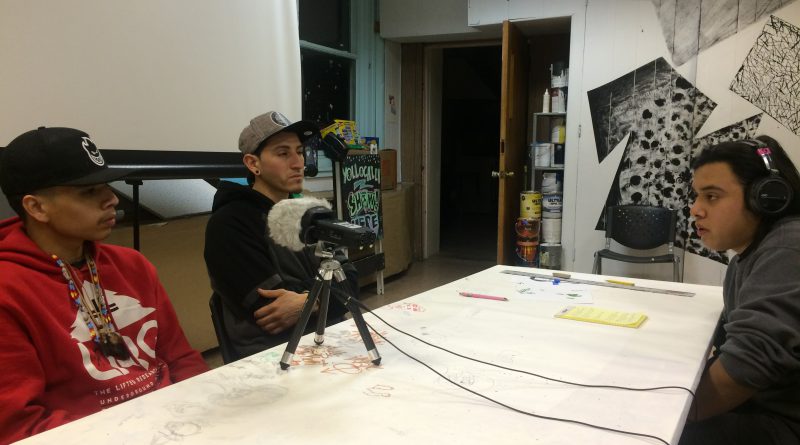 “I’ll be at peace whenever all the pipelines are stopped, and all the harm that is being done to Mother Earth is stopped, that’s the only time I’ll ever feel at peace.”– Phillip Ironshell

Youth are the future and have immense strength to raise awareness on important world issues; they have the power to stand up, have their voice be heard, and their actions taken in consideration.

I sat down with Phillip Ironshell, 19, from Pine Ridge, South Dakota, a member of the Oglala Lakota people. Ironshell currently resides in Denver, Colorado and is a member of the International Indigenous Youth Council’s Denver Chapter. In his most recent visit to Chicago, I sat down with him to talk, alongside youth organizer Carlos De La Vega Tochtli, 29, from the Little Village neighborhood of Chicago. De La Vega is a youth organizer with the International Indigenous Youth Council’s Chicago Chapter.

The International Indigenous Youth Council (IIYC) originated in Standing Rock on the frontlines of fighting against the proposed Dakota Access Pipeline and to protect sacred land. The council is led by teens are from around the U.S. — Arizona, New Mexico, North Dakota, South Dakota, New York, Chicago and Los Angeles.

As the teens headed back home from Standing Rock, they were not sure what to do. So the decision was made to open up chapters around the country, to continue the work of educating and building a movement that was started at Standing Rock.

Phillip’s father Andrew Ironshell of the Thunder Valley CDC organization also fought against the installation of another pipeline, the Keystone XL pipeline, which would have gone through their sacred lands.

“We got Obama to stop it fully, but now that President Trump is in, well he’s not my President, but now that Trump is in, he passed it again, so they’re going to try to build this pipeline, to build it in my land,” said Ironshell. “And I have to stand up against it like the last two: the Keystone XL and the DAPL [Dakota Access Pipeline].”

The original members of the IIYC who camped at Standing Rock were youths aged 17 and up; their movement not only inspired strength but showed their willingness to change a generation. Elders pushed the youth to reach higher, they were often told to stand strong together as they’re the next generation to lead.

While Ironshell was at Standing Rock, it gave him strength and a voice, he said. “You can do this, you guys are the youth, the next generation, you guys are the one with the voice, and they gave us that opportunity to talk,” said Ironshell, quoting an elder at Standing Rock. Then he talked about youth having a voice and being heard. To overcome these fears in starting movements or attending a march, it is best to learn, ask, or observe, he noted. You can be scared, but still do your work with confidence, he said elders told him.

Ironshell said the support of others is crucial to the movement.

“Every little support matters, whether it’s helping your local community, picking up the trash in the streets,” Ironshell said. “What we would like to see is the people going out doing more actions, community organizing, as they don’t just want the people to help them, but to help the world entirely,” he said. “As these chapters are being created in other cities, they are getting ready to stand for their community. By expanding around the world, they can help out anyone. By expanding, they can save the world in any way they can; stopping pipelines, uranium mining, fracking, and all the other bad things that are harming Mother Earth.”

Ironshell travels around the U.S. to raise awareness about pipelines, and empower youth activism.

“I feel like we can do that anywhere, the youth can really step up,” he continued. “I believe that the youth should have a voice, the youth should be able to go out and express themselves, and not feel uncomfortable. Lead your own movement, create your own things. You can make anything possible as long as you put yourself to it. I’ve learned that at Standing Rock, that being young you can actually do something, you can make changes even though we’re young.”

During Ironshell’s visit to Chicago, he was part of a rally for the Decolonization Of People Everywhere on Feb. 3, 2016. He said he had two goals: one was to learn from and share his learning experience from Chicago’s activism, and the other was to apply that knowledge back home. “I came to Chicago to learn from this chapter, as they do a lot of organizing, and it is a major city. I’m just trying to learn how they do things and to take it back to my community”

Ironshell also hopes to train as a police liaison, a peace marshall and a peacekeeper. He also gave useful information for youth and people attending marches and protests. When encountering a person who is yelling at a police officer or trying to disrupt the peace in a protest, it is best to talk to them in a nice way, and tell them that we are peaceful, he noted. If they are not here peacefully, then they are not welcome, not part of our organizing.

Ironshell also advised “doing chants, sing a song as it brings the good vibes from people.”

De La Vega added that: “We are not protesters, we are protectors. We are protectors of the air, water, earth, animals, plants, our people, and our culture.”

He described the missions of the International Indigenous Youth Council. The main mission is to stop fracking, to stop pipelines and any kind of destruction of mother earth, while also promoting sustainable power, such as solar, wind, and water power, as it is free and it does not damage the earth.

On that note, Ironshell gave a shout out to his father Andrew Ironshell and the Thunder Valley CDC for building energy efficient houses instead of paying more money to utility companies for electricity.

“We live on the earth, we live for the earth, and to protect the earth, so not only are we warriors on the frontlines fighting the pipelines, but we are also educated people, we want to educate ourselves even more to bring [information] to these communities,” De La Vega concluded.