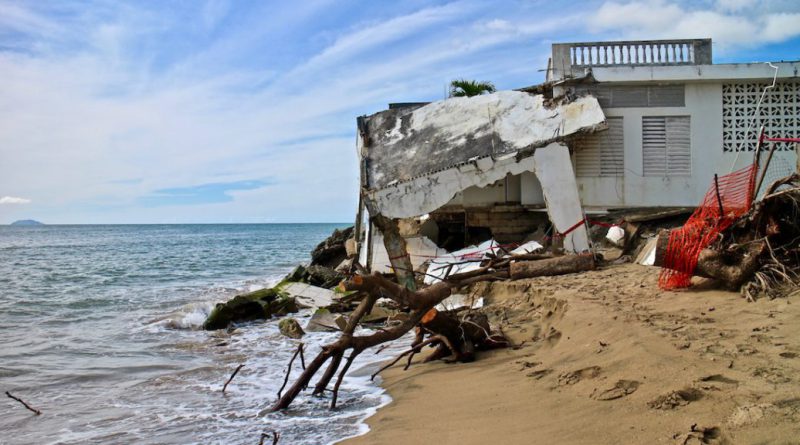 In Alexi Correa’s coastal town of Loiza, Puerto Rico, families are raising their furniture on milk crates and building second floors onto their concrete homes to adapt to frequent flooding caused by sea level rise. They are witnessing a major impact of climate change right at their doorsteps.

Since 2010, the average sea levels around the island have increased at a rate 10 times faster than the historical rate—an increase of about 1 centimeter (0.4 inches) per year. While the change might seem small, the resulting coastal erosion has caused significant property damage and flooding.

In Loiza, a community on the outskirts of San Juan, large sections of the town have fallen into the sea, including a road, a grove of trees, and much of the community’s beachfront park. There is a 5- to 7-foot vertical drop off between the town’s sidewalk and the beach area due to erosion.

Scientists around Puerto Rico have been quick to address the changes occurring on the island, especially because people near the shore are already dealing with the consequences. Maritza Barreto and Rafael Méndez Tejeda, researchers at the University of Puerto Rico, saw Correa voicing his concerns on television and decided to investigate the changes occurring on the coastline.

“When we saw him, we decided to do something. We’re trying to figure out what’s happening because we fear for the people who live close by,” said Barreto, a professor of geomorphology. “Their houses could be destroyed.”

“We feel that the islands are like a canary in the coal mine,” said environmental engineer Ernesto Díaz. “Sadly, nature has been doing part of the job for us,” because now, he can point to tangible changes on the island to show the impacts of coastal erosion and sea level rise in addition to showing his scientific models and charts, he said.

The team visits research stations each month to collect samples of sand, which they analyze to determine the sediment composition. This allows the researchers to determine the origin of the sand – from the sea or the land – and measure the coastal erosion at the beach. On a field visit to Loiza, Méndez Tejeda pointed to the trees that had fallen within the past two years because of erosion.

“This tree was about 40 years old, which implies the beach was not like this 40 years ago,” Méndez Tejeda said. “There’s a reason why I came to this community—because it’s a real community, not just hotels and buildings, and no one was helping them. This is the human impact [of climate change].”

For coastal communities like Loiza, the beach is often where people gather during weekends and celebrations. But due to the erosion caused by the rising seas, the beaches are quickly disappearing.

“Our beaches are the safety valve for our poor people. That’s where they go, and slowly we’re losing that,” said Aurelio Mercado, a physical oceanographer at the University of Puerto Rico, Mayaguez.

Mercado has been recording monthly sea levels on the island for years to analyze how the levels differ from the past. He is concerned because the sea levels continue to surpass the historical averages, and have been especially high since 2010, he said.

“In the past we were talking about sea level rise on the order of 1 or 2 millimeters (0.04-0.08 inches) per year,  but now we are talking more on the increase of 1 centimeter per year (0.4 inches)—it has increased by a factor of 10,” Mercado said. And the pace is accelerating.

“I noticed in 2010 that there was a sharp increase in sea level and that explains what has been happening since 2010 [with coastal erosion],” Mercado said. “I thought sea level was happening and it was causing erosion and some flooding but I never thought that there were some communities that not only in 2015, but in previous years, were coping with inundation in their houses.”

In addition to affecting coastal communities, sea level rise has caused significant damage to hotels and beachfronts, which might impact the island’s tourism industry, said Ruperto Chaparro, director of the Sea Grant Program for Puerto Rico. Chaparro has been photographing the changes around the western edge of the island, especially near Rincón, a popular surfing destination.

“If you’re located on the beach, it doesn’t care if you’re rich or poor,” Chaparro said. “Sea level rise is a big problem since it is putting a lot of communities in danger and the tourism industry because if we lose our beaches, then we won’t have a tourism industry.”

Global temperatures are rising because of the heat-trapping effect of carbon dioxide emissions collecting in the atmosphere as we burn fossil fuels. Warmer temperatures contribute to the warming of ocean water and the melting of freshwater held in land based ice—two factors that increase global sea levels.

“We’re making the world warmer – we have very high scientific confidence of that. When we warm the world, ocean water warms. Warmer water takes up more space. That’s sea level rise,” said Richard Alley, professor of geosciences at Pennsylvania State University. “As we warm the world, mountain glaciers are melting, water that used to be on top of the Alps is now in the ocean, that raises sea level.”

The warming of ocean water itself causes it to expand and rise more, because of the thermal or heat expansion property of water. This means that water takes up more space, or expands, as it heats up. Water is unique in that it expands when it freezes, but it also expands incrementally once its temperature is above 4 degrees Celsius, or about 39 degrees Fahrenheit.

The melting of mountain glaciers is contributing to the rise, but the worry is that the ice sheets over Greenland and Antarctica might melt quicker than expected and contribute to rapid increases in sea level rise, Alley said.

“Over the 20 years leading up to the most recent [2013] United Nations assessment, the ice sheets were shrinking at a rate that would have taken more than 100,000 years to go away completely. That’s the equivalent of me going on a diet and losing one third of one potato chip a year. And I could do with losing faster, but if the ice sheets lost faster it would be very bad. So, the question is if we make it really hot, do the ice sheets go on some crash diet, lose weight in a big hurry, and the sea level goes up a lot. And that is really possible,” he said.

Scientists shift from research to action in Puerto Rico

In addition to damages from erosion and flooding, the island has experienced unpredictable rainfall, with intense storms and significant droughts that have led to water rationing in parts of the island, he said. To address the rapidly changing environment, Díaz helped create the Puerto Rico Climate Change Council (PRCCC), an organization that brings together scientists, engineers, health professionals and policymakers to address the impacts of and adaptive strategies for climate change around the island.

“People here can relate directly to the effects and impacts of climate change. Maybe in the past they didn’t associate with it, but we have seen the worsening of coastal erosion and extreme events like droughts and floods, people are understanding that things are changing. The effects and impacts will be magnified if we don’t do something about it,” he said.

Díaz also directs the island’s Coastal Zone Management Program through the National Atmospheric and Oceanic Administration (NOAA). His colleague Amanda Leinberger is developing an online “Vulnerability Self-Assessment Toolkit” to help coastal communities “assess their own hazard risk and then, based off that, offer or recommend feasible adaptation strategies,” she said. The goal is to increase communication between the coastal communities on the island so that more people can benefit from effective solutions to sea level rise and erosion.

Coastal erosion is exacerbated by man-made changes to the shoreline, which include building new properties too close to the beach and building sea walls to prevent the ocean from destroying buildings. A coastal construction setback line to prevent new development on the coastline might be the best option for areas that have yet to be developed, because “at the end of the day you cannot fight Mother Nature,” said Mercado.

But for communities already struggling on the coasts, the solutions are more complicated. Concrete sea walls are common in Puerto Rico, and temporarily can protect houses and buildings. But eventually, the walls themselves can contribute to further erosion of the beach, Chaparro said.

Beach renourishment, or adding sand to beaches, can increase the distance between buildings and the coastline, but it is too expensive to be feasible in Puerto Rico, the scientists said.  Relocating coastal communities further inland involves many complicated and expensive social issues, Chaparro said.

“When you talk about removing people from coastal communities, they are reluctant,” because historically, communities have been relocated to construct large hotels or resorts, he said. “This is a very delicate problem and programs must be made with a multidisciplinary approach to these decisions and these social concerns must be taken into account.”

Some communities have responded to the changing sea level with their own solutions, like raising their furniture on milk crates or cement blocks, moving to the second floor of their homes, or building homes with expandable stilts.

“Moving to the second floor is becoming a very common adaptive strategy. A family will often build a second floor over time and start moving pieces of the house up to the second floor,” said Katia Aviles-Vasquez, professor at the University of Puerto Rico in Rio Piedras. “In some houses, they’ll have living arrangements on the second floor and they’ll put anything they can lose on the first floor.”

These adaptations allow communities to temporarily cope with the flooding, but developing a long-term solution is more difficult, she said. Aviles-Vasquez directs the island’s Bosque Modelo (Model Forest) program, an organization which works to promote community-based sustainable development, tourism and conservation.

Coastal conservation efforts have helped some communities avoid significant property damage. The Corredor del Yaguazo, a community-run conservation and ecotourism site near San Juan, has reestablished the area’s natural wetland ecosystem in an area formerly used for housing. The wetland helps shield the community from the sea—it acts as a holding pond for excess water, and the roots of the coastal trees help prevent the land from eroding.

In Yaguazo, the wetland currently has over 200 mangrove trees, and the group hopes to plant 800 more by March, said the organization’s director, Don Pedro Carrion. Mangroves are coastal trees that live right on the beach in tropical regions, tolerate salt water, and prevent sand from eroding from beaches. Carrion’s own home, which serves as a research and learning center for the organization, is built with extendable stilts, which he can raise up in case of flooding.

“Pedro designed his house on stilts, which is a very common strategy, but the stilts, the way that he designed them, they could literally raise the house entirely. He’s taught some of his neighbors to do that,” said Aviles-Vasquez. “That’s a community-based strategy for adaptation.”

This story was originally published on December 7, 2016 in Medill Reports.

Image at top: Changes in sea level affect all coastal communities in Puerto Rico, including the popular surfing destination of Rincón. “If you’re located on the beach, it doesn’t care if you’re rich or poor,” said Ruperto Chaparro(Photos by Janice Cantieri/MEDILL. Animation scripted by Janice Cantieri/produced by Next media Animation. Video by Kelly Calagna/MEDILL.