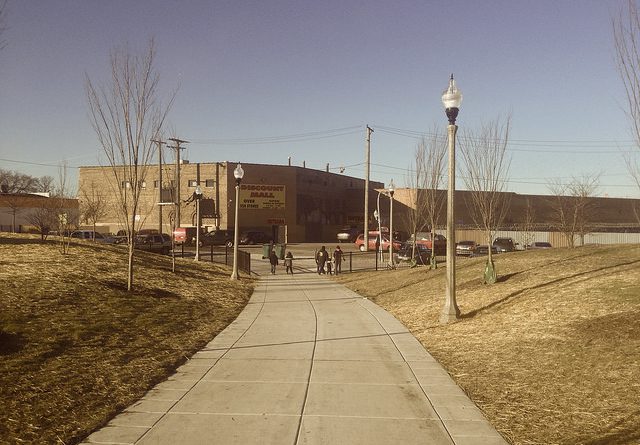 As city officials stumble to explain the escalation in violence in Chicago over the past year, they may want to travel to Little Village for a lesson in environmental justice. In fact, in the shadows of Cook County Jail is an extraordinary example of why an environmental justice perspective is needed to address violence in Chicago. Once a highly contaminated Superfund site in the Little Village neighborhood, La Villita Park has not witnessed a single shooting incident or homicide since it was opened as a new park on December 14, 2014. Located in a neighborhood that has struggled with street violence, and in a city that recorded 5,976 shooting incidents over the past two years and double the homicides of New York City and Los Angeles combined in 2016, the peace that exists in La Villita Park is truly remarkable. In addition to undermining representations of Little Village as a hyper-violent community, La Villita Park stands out as a model for those craving alternatives to broken-windows policing and other ineffective solutions to neighborhood violence.

The transformation of La Villita Park into a peaceful sanctuary in Chicago is due to the sustained organizing efforts of community leaders working with the Little Village Environmental Justice Organization (LVEJO). LVEJO gained international attention for organizing to shut down the Fisk and Crawford coal plants in Chicago. Meanwhile, LVEJO’s campaign to transform a Superfund site polluted by the company Celotex resulted in the first large park built in Little Village in 75 years. In addition to eliminating a toxic brownfield site that harmed the community, LVEJO’s park campaign also exposed the environmental roots of violence in Little Village.

The 22-acre La Villita Park doubled the amount of green space in Little Village. For a densely populated neighborhood that has a severe lack of green space, one cannot overstate the significance of access to La Villita Park especially to families and community members from the eastern section of the neighborhood who live far from Little Village’s only other major park. Moreover, the sights and sounds of children playing, skateboarders gliding through the skate park designed by local youth, local food vendors exchanging their goods, and residents exercising or simply taking a moment to reflect, provide a striking contrast to the awful sights of “justice” immediately across the street at Cook County Jail.

Located literally in the shadow of the nation’s largest jail, with razor wire and cell blocks butting up against the park’s east side, La Villita Park created an urban border that separates opposing environmental justice and criminal justice solutions to violence. As a vision of health, peace and environmental justice, the striking contrast between the park and the jail raises critical questions about mass incarceration as a disgraceful solution to urban violence. Tellingly, the Cook County Jail covers 96 acres — roughly twice the amount of green space in all of Little Village. Addressing the long-standing lack of green space in the community, and right next to the looming jail, La Villita Park has made visible the ways land use planning and management, broken-windows policing, and mass incarceration have historically contributed to an environment of violence in the community. La Villita Park helps to clarify this EJ perspective of urban violence, a political perspective that acknowledges that low-income communities experience multiple forms of environmental racism.

From an EJ perspective, lack of access to healthy spaces, broken-windows policing, and mass incarceration are forms of environmental racism as they propagate a deadly environment of violence that working people and youth of color must survive and negotiate on a daily basis.

In a community where slow and fast acts of violence have impacted health and life outcomes for decades, the creation of La Villita Park and community building efforts led by LVEJO are transformative on multiple levels. Working to transform toxic spaces into healthy sites of environmental justice, LVEJO’s youth-led and intergenerational organizing directly resists the deadly logic of environmental racism. Indeed, achieving peace in La Villita Park overturns what Northwestern University professor Dr. John Márquez has described in Black-Brown Solidarity as the racial state of expendability, or the “perpetual susceptibility to obliteration with legal impunity” that communities of color endure in the United States.

Of course La Villita Park has not remained a peaceful sanctuary in Little Village for the past two years without steadfast organizing and active community leaders. To maintain community involvement in park programming, ensure that basic park services are delivered, and to advocate for a park fieldhouse, LVEJO organized the La Villita PAC, one of the strongest park advisory councils in the city. With little funding and support, LVEJO has brought together a community-led PAC comprised of community leaders and organizations committed to working with local youth, promoting peace in the new park, and supporting community-led efforts to resolve conflicts and avoid violence.

LVEJO also initiated the Mi Parque program to support restorative justice work and intergenerational environmental stewardship in La Villita Park. Youth and adults involved in the Mi Parque program promote zero waste and recycling practices in the park, receive trainings in conflict mediation, and are actively involved in monitoring the quality of park programming and services. Though police regularly patrol the park, it is hard to imagine that it would be a peaceful place for recreation and leisure without the La Villita PAC and Mi Parque program.

Like many raised in Chicago who have lost multiple close friends and loved ones to street violence, it’s always frustrating for me to listen to city leaders and experts propose the same bankrupt solutions for resolving violence in the city. By achieving peace so far in La Villita Park, LVEJO and community leaders are showing the experts and the rest of Chicago that in addition to good jobs, community cohesion, and violence intervention, communities hard hit by violence require environmental justice.

Antonio Lopez is the former executive director of LVEJO and holds a PhD in Borderlands History from the University of Texas at El Paso. His piece with Mariela Fernandez for the National Recreation and Park Association magazine, “Latino Residents Champion for Green Justice in Little Village,” further describes LVEJO’s work. Antonio is currently a SJNN Fellow, focusing on environmental and energy justice in Chicago.