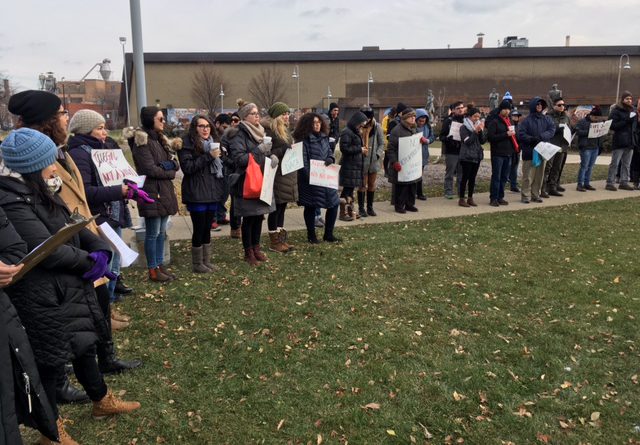 Protesters gathered at Pilsen’s Benito Juarez Plaza in freezing temperatures December 10 to demand protection for the rights of undocumented immigrants in light of president-elect Donald Trump’s threats to carry out mass deportations.

“As of now we really want to focus on the election and its repercussions,” said organizer Esteban Perez, 20. “Since the election a lot of local representatives haven’t really come out yet to say where they stand on Latino immigrant issues. We want to make sure that the representatives in the city are on our side.”

The rally, dubbed the Grito de Heroes (Cry of the Heroes), was organized by Fuerza del Sol, a youth activist group formed in conjunction with the Pilsen Neighbors Community Council and the grassroots Gamaliel network. Fuerza del Sol hopes to put pressure on Cook County State’s Attorney Kim Foxx to clarify her stance on immigration, specifically whether or not she will pledge her support for the roughly 150,000 undocumented residents of Chicago.

Standing beneath a statue of Mexican revolutionary Aquiles Serdán, attendees held aloft signs reading “Illegal Is Not a Noun” and “Aqui Estamos Y No Nos Vamos!” (We are here and we’re not leaving!)

“We have a right to drive to work and get home without being detained,” declared organizer Katherine Huete, 23. “We are not going to be held captive in our own city, living in fear!”

As attendees chanted “No Nos Vamos!” organizer Sarina Sweis, 26, circled the crowd collecting signatures for a petition demanding that Foxx stand up for Chicago’s undocumented citizens.

The petition explained that November’s election results have left community members “concerned about being able to receive an education or have the ability to continue to work. [Trump’s] blatant threat to separate families by deporting 11 million undocumented immigrants without a proper pathway to citizenship is a tough reality we must face together.”

“We’re saying that we are not going to hide. Immigrants make up a big portion of Chicago and our country now,” said Sweis. “It’s not up to certain white men in expensive suits to determine who’s an immigrant and who’s not. The only people that weren’t immigrants here are Native Americans and we see how they’re treated.”

In 1985, Mayor Harold Washington signed an executive order prohibiting city employees from investigating or disclosing the citizenship status of Chicago residents. The order also extended full access to “all municipal benefits, opportunities and services” to all residents regardless of citizenship status. The policy was turned into law by Mayor Daley in 2006. Mayor Rahm Emanuel has pledged to keep Chicago a sanctuary city despite Trump’s threats to withhold federal funding from such cities.

Rally attendees were given pamphlets in English and Spanish informing them of their rights if stopped by immigration agents or the FBI. Attorney Jorge Montes told the crowd that undocumented workers have the right to refuse searches without a federal warrant and expunge criminal records to facilitate the citizenship application process. He cited the proposed California Values Act as an example for policymakers in Chicago: if this bill passes, California law enforcement agencies will be legally prohibited from colluding with ICE in the state.

“Let’s put the pressure on the elected officials in Chicago to create an act that will make things the same in Illinois as in California so we will not be cooperating with any immigration authorities,” Montes said to enthusiastic cheers.

When 19-year-old activist and DePaul University freshman Brenda Gonzalez took the megaphone, the crowd fell silent. Gonzalez, who was born in Mexico, described her family’s difficult journey to America, the detainment and deportation of her father, and what it’s like to await approval of her Deferred Action for Childhood Arrivals (DACA) application. Trump has threatened to end DACA, and many immigrants who are now registered under the program fear they will be more vulnerable to deportation now that the government has a list of their names.

“I have the willpower necessary to continue my education and the right to remain in the country that has become my home,” Gonzalez said. “I am determined to ask not only for my safety, but for that of my community in Pilsen and other Chicago neighborhoods.”

The young activists of Fuerza del Sol have set their sights on goals such as the abolishment of ICE in Chicago and the extension of full benefits to undocumented workers.

“I think a lot of people create organizations and they bring youth on, but they don’t really listen to their ideas,” Perez said. “We’re bringing lawyers and elected officials out to these actions we plan and getting them to listen to the voice of the youth, because we’re the next generation of powerful, successful people.”

Gonzalez and Perez counter the long-standing claim that undocumented citizens are “stealing jobs” and moving to America as part of some “evil scheme.”

“I don’t think we’re stealing jobs,” Gonzalez said. “We’re working the jobs that people don’t want to be working, like picking strawberries in the field. We’re working those [physically demanding] jobs, and we’re being exploited by them.”

“These people that believe these misconceptions haven’t listened to [undocumented immigrant’s] stories, haven’t loved someone that is undocumented and that fights every day for this protection,” Perez added. “These are human beings with families and jobs and dreams.”

Rebekah Frumkin is a writer and reporter living in Chicago. Her work has appeared or is forthcoming in Granta, Pacific Standard and In These Times, among other places. Her novel, The Comedown, will be published by Henry Holt in 2018.