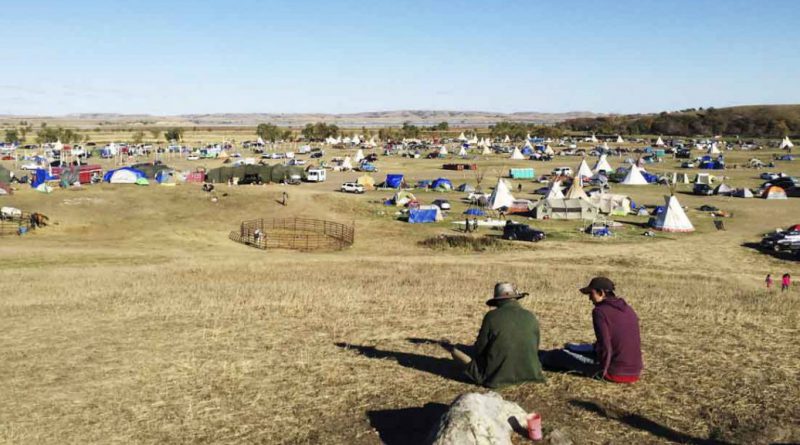 By Pat Nabong and June Leffler

Sakowin camp in North Dakota with a banner that reads, “Muslims stand with Standing Rock.” In a ceremonial dance, Aztec dancers from South America have skipped to the beat of percussion instruments. A white man from Portland treated Native Americans who’d been maced during a protest.

Just last week, 2,000 veterans arrived to protect protesters against armed police on the frontlines. Thousands of non-Native Americans from all over the U.S. joined Native Americans from more than 300 tribes. By all appearances, this huge alliance is what made the U.S. Army Corps of Engineers announce after prolonged delay that it was denying an easement to the pipeline company, a decision that effectively stopped construction in its tracks. But despite the partial victory, their fight continues.

What first started in April as a modest camp of just a handful of Native Americans from the Standing Rock Sioux tribe grew to 8,000 people, trying to stop the $3.7 billion pipeline that the tribe says destroys sacred burial sites and threatens their main water source.

They share one battle cry: “Mni wiconi” or “water is life.” But there is more to it than just clean water.

“Native people from all kinds of different tribes are coming together, and this is more than just a protest about the water,” says Daphne Singingtree who is of Standing Rock Lakota descent. “Although that’s a key thing, it’s really the birth of a movement.”

That movement is now popularly known as NoDAPL which has resulted in what people call the largest convergence of tribes since Wounded Knee in 1890. Native Americans and their allies have been camping out near the Standing Rock Sioux tribe’s reservation in North Dakota to protest the 1,168-mile pipeline that will carry crude oil from North Dakota to Illinois.

The pipeline is almost fully constructed, but the Corps, which has jurisdiction over 3 percent of the land that the pipeline will go through, denied on Dec. 4 the last easement under Lake Oahe–the only remaining uncompleted part of the pipeline.

But skeptical protesters are not backing down. And their skepticism is not unfounded especially with a Trump administration loomingand Energy Transfer Partners’ response. The developer of the pipeline released a statement a day after their permit was denied, saying they “are fully committed to ensuring that this vital project is brought to completion and fully expect to complete construction of the pipeline without any additional rerouting in and around Lake Oahe. Nothing this Administration has done today changes that in any way.”

Although the pipeline passes through only North Dakota, South Dakota, Iowa and Illinois, the NoDAPL movement seems to have transcended geography, race and faith.

People from all over the world have been supporting—either physically or virtually—Native Americans who are trying to permanently halt the pipeline.

“The protection of this water isn’t just for us. It’s for everybody,” says Donnielle Wanatee who belongs to the Sac and Fox tribe of the Mississippi and Meskwaki nation in Iowa. Although historically, the Meskwaki nation and the Sioux fought over land, she was among the many people who traveled to North Dakota to stand in solidarity with them.

Support for water protectors, as they prefer to be called, has boomed over the past few months especially on social media. In October, more than 1 million people world-wide on Facebook checked into Standing Rock reservation to confuse law enforcement who were rumored to be monitoring protesters online.

On the Nov. 15 #NoDAPL Day of Action, people in more than 300 cities echoed the cry of Native Americans in North Dakota. Even supporters in Canada, Japan, Portugal and Scotland took to the streets to call on Pres. Obama and the Corps to permanently halt construction.

Non-Native Americans backing the NoDAPL movement come from different backgrounds, and while their unified rallying call is “water is life,” the movement resonates with them because they see a larger picture.

“When you find yourself in a world where you do not belong, then you have to change that world,” says Safiyyah Abdullah from Washington, D.C. who traveled to North Dakota to help at the camp. “We have all been made the ‘Other.’ We don’t belong in the established institutional racist world…so you either die or you stand.”

Basil Abdul Khabir traveled with Abdullah because he believes this isn’t just a Native American issue.

“We’ve been through so much turmoil in this country, and we need to stand and fight for all indiscretions. Even during the times of slavery, the Native Americans and the African worked together. [We’re here to] help them to stand and get a victory in this movement because they’re not just saving their land. They’re saving other people.”

Although the rallying point is the Dakota Access Pipeline, this isn’t just about one pipeline, says Doug Kiel of the Oneida nation in Wisconsin who is an assistant professor in Northwestern University’s history department. To Kiel, it’s about an underlying problem of domination and structural oppression that has existed for hundreds of years.

“I think that the bigger clause of what makes this [NoDAPL] explode the way it does is not a sense of this is as a one-off problem…This is a lot of people who are recognizing that this is a deeply-rooted structural problem,” says Kiel.

“This is about ongoing exploitation by both governmental forces and, in this case, more so, corporate forces, and understanding that is part of a long chain of an ongoing set of processes that have never really stopped…and that people recognize this and are simply tired of it,” says Kiel.

Linda Black Elk of the Catawba nation thinks that environmental racism is one of the most glaring structural problems spurring the NoDAPL movement.

“It [pipelines, dams and fracking] almost always tends to be centrally located very close to where indigenous people live or where indigenous people have lived for a very long time or where there are poor communities living…you don’t see them trying to frack Beverly Hills or wealthy communities in any state, right?” says Black Elk, an ethnobotanist who’s been serving on the medical team in Standing Rock.

The pipeline was first proposed to pass through the Missouri River north of Bismarck. Many NoDAPL supporters claim that the pipeline was rerouted because Bismarck residents, who are predominantly white, were concerned about potential contamination of their water source. However, the initial route was scrapped after the Corps concluded that the pipeline would traverse more wetland, road and water crossings, according to The Gazette. The original route also would have been 11 miles longer and would have been closer to residential areas. These reasons are being used to argue that the current route that passes less than a mile from the Standing Rock Sioux reservation is safer.

Developers of Dakota Access Pipeline claim that pipelines are the safest way to transport oil, and are a safer option compared to ships, trucks or trains. But Sunoco Logistics, which will operate the Dakota Access pipeline, has had at least 203 oil spills since 2010, according to Reuters’ analysis of government data. Overall, there have been 11,208 pipeline incidents, including leaks and facility shutdowns since 1996, according to the latest report by the Pipeline and Hazardous Materials Safety Administration.

In 1994, Pres. Clinton issued an executive order which required all federal agencies to “make achieving environmental justice part of its mission by identifying and addressing, as appropriate, any disproportionately high and adverse human health or environmental effects of its programs, policies, and activities on minority populations and low-income populations.”

Despite this, environmental injustice remains largely unaddressed. A nationwide study by the University of Minnesota reveals that based on indicators like race and income, people of color are 38 percent more exposed to nitrogen dioxide. And to Native Americans and minorities, this is not new.

Between the 1940s and 1980s, the Navajo territory in Arizona was mined for uranium. The deadly effects are still felt today despite governmental effort to clean the mines.

Just last year, Native Americans were fighting the recently rejected Keystone XL pipeline, which was set to cross tribal lands belonging to the Sac and Fox Nation. The lead crisis in Flint, Michigan,has spurred debate over whether it was neglected for so long because the community was predominantly African American. Just this September, high levels of lead and arsenic were discovered in a low-income housing complex located near the U.S. Smelter and Lead Refinery plant in East Chicago, IN, that was shut down in 1985.

“Environmental racism is really a huge issue and it’s the reason why all of this is happening,” says Black Elk. “I believe that so many people are finally fed up with what has been going on in minority and impoverished communities. That’s why they’re here. That’s why this has become a rallying point around the issue of saying, ‘Hey, we can’t just stand in our communities. We have to stand up for each other.’”

Protesters say that this is just the beginning. Momentum from the NoDAPL movement will continue onto similar causes, they say.

“I was asked, ‘When do you consider this pipeline issue to be over?’” says LaDonna Allard, Director of the Sacred Stone Camp, in a press release. “I said, when every pipe is out of the ground and the earth is repaired across the United States.”

Photo at top: Native Americans take a rest on a hill overlooking the Oceti Sakowin camp in North Dakota where about 2,000 people were camped in October. Oct. 7, 2016. (Pat Nabong/MEDILL)