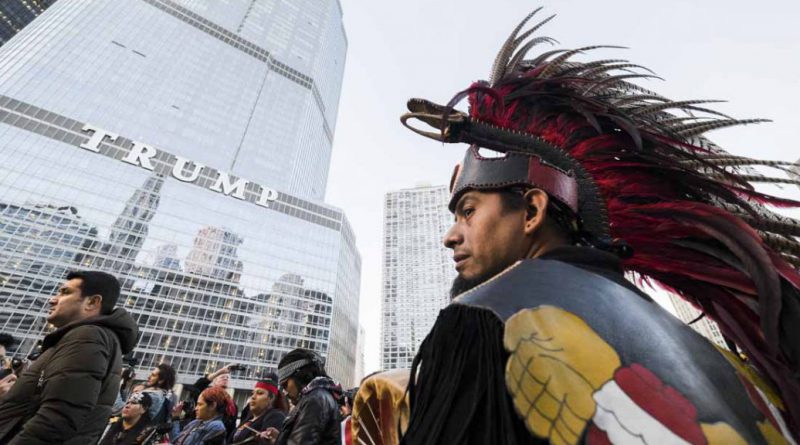 Right by the Chicago River, hundreds of Native Americans and their supporters chanted, “Water is life!” Adorned with traditional headdresses, some of them lit tobacco and prayed for their water. And as the sun set, they danced under the shade of the multi-million-dollar Trump Tower, one of the monoliths that represents the man who will be stepping into the White House in January.

As people continue to protest in various states against the results of the election, thousands of Native Americans and their allies all over the nation are intensifying their fight against the controversial Dakota Access Pipeline. Now that a leader who has expressed his support for and has a vested interest in the fossil fuel industry is about to rise to power, those who are fighting the pipeline feel a stronger sense of urgency.

Trump “puts politics over people, so I believe deep down in my heart that now that Donald Trump won the presidential 2016 election, he will allow Dakota Access Pipeline to continue to be built,” said Lamon Reccord, organizer of one of the NoDAPL protests in Chicago.

With less than two months left for the Obama administration, and the pipeline almost complete, Native Americans and those who are in solidarity with them are racing against time, with their voices pleading to Obama, their picket signs poised in front of U.S. Army Corps of Engineers buildings and their eyes locked on Trump.

But Obama and the Corps are delaying the process. The U.S. Army Corps of Engineers is a federal government body that has the power to grant permits for water crossings and construction on federally-owned lands. The Corps is asserting jurisdiction over the 3 percent of Dakota Access Pipeline’s 1,168-mile route. They have not permitted the pipeline to cross Lake Oahe in North Dakota, the only remaining uncompleted section  of the pipeline.

Obama stepped in and temporarily halted the pipeline’s construction in September and requested the company to “voluntarily pause all construction activity within 20 miles east or west of Lake Oahe” to accommodate further discussions among tribes, pipeline developers and the Corps.

In an exclusive interview with NowThis on Nov. 1, Obama said, “I think right now the Army Corps is examining whether there are ways to reroute this pipeline in a way. So we’re going to let it play out for several more weeks and determine whether or not this can be resolved in a way that I think is properly attentive to the traditions of the first Americans.”

In a statement, the Corps said that while discussion among the tribe, Energy Transfer Partners and the Corps is ongoing, “construction on or under Corps land bordering Lake Oahe [in North Dakota] cannot occur because the Army has not made a final decision on whether to grant an easement.”

Although the pipeline is still in limbo,  people are continuing what they have been doing for the past few months but now with more immediacy, an air of desperation and a rethinking of strategy.

Energy Transfer Partners and its subsidiary Sunoco Logistics Partners L.P. have fought back by filing two lawsuits in federal district court. The press release states that they have the “legal right-of-way to build, complete and operate the Dakota Access Pipeline without any further action from the Army Corps of Engineers.”

Those who are against the pipeline are continuing to call on President Obama and are protesting in front of Corps offices in various states.

“We still have time to fight the battle of not having Donald Trump in office [by writing letters to the White House and organizing] and also fighting the battle to make sure Obama says no to this pipeline,” said Reccord.

Community organizing has intensified with nationwide protests and the Nov. 15 #NoDAPL day of action during which demonstrations were held in over 300 cities in the U.S. and abroad. Several petitions are circulating while some people are divesting from banks such as JPMorgan Chase and Bank of America, which are funding the Dakota Access Pipeline, according to Yes! Magazine.

“He’s [President Obama] got a great chance to put a cherry on top of his sundae of his eight years as a leader,” said Janet Toton, who joined a NoDAPL protest in Chicago. “So I think I’m going to pray for that. And then it’s going to be a battle to make sure that everything stays in place once Trump does take his seat.”

Protesters are convinced that if construction is not halted during the Obama administration, Trump will allow the pipeline to be completed.

Some even believe that depending on how the Obama administration and the Corps frame their decisions, Trump will be able to affect construction of the pipeline regardless.

If the halt in construction is made permanent by the Obama administration, Trump will still probably be able to overturn that decision, according to a source in the Corps’ legal department. However, this is going to be a complex process. If Trump wanted to lift the halt by executive action, there would need to be legal steps to do it. The process would be long and complex, and it’s never just “black and white,” according to Phillip Ellis, senior press secretary of Earth Justice, the legal team of the Standing Rock Sioux Tribe.

It is not clear if that process would be any shorter than the lawsuits that are now pending in federal court.

The reason why protesters are intensifying the movement in the wake of the election is also because of Trump’s vested interest in fossil fuels and his statements about climate change.

Trump’s conflict of interest is evident in his personal financial disclosure forms, one of which he released when he announced his candidacy in 2015. The forms show that he invested $500,000 to $1 million in Energy Transfer Partners, L.P., one of the primary developers of the pipeline that the Standing Rock Sioux tribe claims destroyed sacred burial sites and threatens the tribe’s water source. One year later his financial disclosure form, which he released in May 2016, shows that his investment in Energy Transfer Partners was reported at $15,000 to $50,000 worth of stock, according to the Associated Press and The Guardian, though it’s not clear what accounted for the dramatic decrease in investment and whether Trump gained or lost on the selling of the stock.

Trump also owns a significant amount of stock in Phillips 66, which has a 25% share of the pipeline, according to both The Guardian and the Associated Press, though the amounts in the reports differ.

Trump’s 2016 financial disclosure forms also reveal that he has millions of dollars invested in several other fossil fuel companies, according to Greenpeace.

What worries people even more than Trump’s investments in fossil fuel industries are his statements on environmental issues.

The concept of global warming was created by and for the Chinese in order to make U.S. manufacturing non-competitive.

“I believe strongly in clean water and clean air. But I don’t believe what they say [climate change]. I think it’s a big scam for a lot of people to make a lot of money,” said Trump in an interview on ‘The O’Reilly Factor.’ During the interview, he also did not directly answer whether he was willing to invest in alternative energy.

Burning of fossil fuels is directly linked to rising global temperatures which have increased approximately 0.8 degrees Celsius since 1880, according to the National Aeronautics and Space Administration.

“I just see Trump and his cabinet, his various orders [are] just working in various ways to create more dependency on non-renewable fossil fuels,” said Al Eastman of the Rosebud Sioux tribe, who is an environmental scientist and a community organizer in Chicago.

Trump even pledged to relaunch construction of the Keystone XL Pipeline, which many Native Americans rallied against and was stopped by Obama in Nov. 2015.

“Trump is a fair man and I believe once he understands what dangers lay in running the pipeline near the river…he will make the Corps move it,” said Tara Swann, a Shawnee and Cherokee from West Virginia, who voted for Trump. “We are begging on Mr. Trump to meet with our elders and listen.”

One of those elders who was at the post-election NoDAPL rally at Trump Tower has already reached out. “Mr. Trump should look into these things although they don’t seem to be important, but they are,” said Berta Jimenez, a Huichol Indian from Mexico. “They are very, very important for the rest of the world. If we take care of Mother Earth, Mother Earth will take care of us.”

Photo at top: A Native American stands in front of Trump Tower during a NoDAPL post-election rally in Chicago. Nov. 11, 2016. (Pat Nabong/MEDILL)