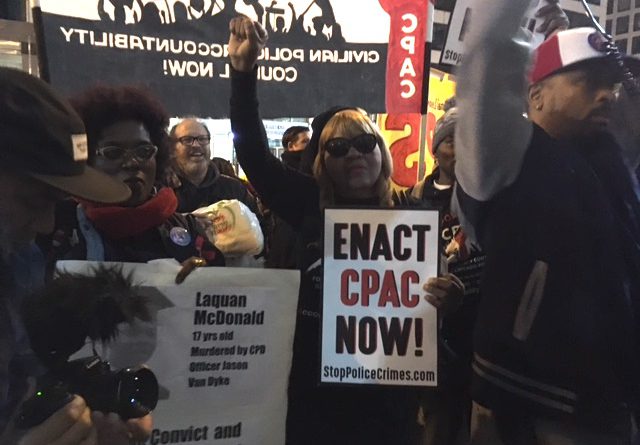 The recent election of Donald Trump to the presidency stands to pose a threat to police reform efforts in Chicago, according to experts. Trump’s main proposed solution to Chicago’s gun violence is stop and frisk, a practice that has already been found unconstitutional in New York.

The president-elect, who was endorsed by the Fraternal Order of Police, called for a return to “law and order” during the first presidential debate.

“In a place like Chicago, where thousands of people have been killed…we have to bring back law and order,” Trump said. “Now whether or not in a place like Chicago you do stop and frisk, which worked very well…it brought the crime rate way down. But you take the gun away from criminals that shouldn’t be having it.”

According to a 2015 ACLU study, Chicago’s use of stop and frisk resulted in racial profiling: 89 percent of those stopped were Black or Latino, and officers often gave unconstitutional reasons for the stops such as “suspicious person” or “matched a description.” In 2014, Chicago’s rate of stop and frisk was also the highest in the nation, with roughly 94 stops per 1,000 people as compared to just 2 per 1,000 in New York.

The prevalence of unconstitutional stop and frisk incidents in Chicago was shown to “significantly damage the relationship between police and community,” the ACLU reported. Meanwhile the Chicago Police Department’s relationship with its city — in particular its communities of color — has never been a positive one, with widespread anger over police brutality, harassment and unwarranted shootings going on for years.

Chicago’s rate of killings by police reached 3 per million in 2015, a value that was shown to have no relationship to the level of violent crime in the city.

Public discontent over the police slayings of Rekia Boyd in 2012 and Laquan McDonald in 2014 fueled demands for reform. On July 20, the Chicago Alliance Against Racist and Political Repression introduced an ordinance in city council calling for community control of the police.

The ordinance proposed the creation of a civilian police accountability council (CPAC) composed of elected individuals from each police district in Chicago. CPAC was suggested as a replacement for the Independent Police Review Authority (IPRA), the embattled agency tasked with investigating CPD misconduct and complaints.

“The chief administrator and IPRA staff are all ex-cops,” says Frank Chapman, who heads the Chicago Alliance Against Racist and Political Repression. Chapman and other activists say these former officers are incapable of fairly regulating the department in a way that prioritizes the needs of marginalized communities.

“The main function of the police is always serving those who are part of the ruling structure,” Chapman says. “They have always been there to protect the wealth and the property of the bosses, whether they be slaveholders in the South, capitalists in the North, or ranchers and landowners in the West. It makes no difference.”

IPRA came under fire after the 2015 release of dash-cam video revealing 17-year-old Laquan McDonald being shot 16 times by Officer Jason Van Dyke on Chicago’s southwest side. Many felt the disturbing video showed a department culture where officers are all too willing to shoot civilians who do not pose a lethal threat.

By late last year, IPRA had ruled only 2 of the 400 police shootings it investigated unjustified. Meanwhile a 2015 analysis of data compiled by the Invisible Institute found that police abuse complaints by Black Chicagoans were dismissed nearly 99 percent of the time.

After the release of the McDonald video, Mayor Rahm Emanuel announced his commitment to reforming IPRA.

Many activists and community leaders are not satisfied with COPA, saying it lacks both a set percentage of the city’s budget devoted to police accountability and the ability to provide independent oversight. CPAC includes both these components. COPA will be headed by a chief administrator selected by the mayor. The selection process for its board of investigators has yet to be determined.

“COPA is just another word for IPRA,” says CPAC activist Toney Rogers. “It’s a hand-picked organization by the mayor trying to fool the people in the community to pretend like they’re CPAC.”

CPAC aims to place control of the police in the hands of communities, including those most affected by police violence. CPAC members would control everything from the appointment of a police superintendent to the disciplining of officers who violate citizens’ civil rights.

Activists say they will continue to fight for an elected police oversight board and more accountability from the department. On October 22, roughly 600 people gathered in Millennium Park to protest the shooting of Laquan McDonald and demand the enactment of CPAC. Among the protesters were rapper Vic Mensa and Rev. Catherine Brown, whose brutal beating by Chicago police in 2013 was caught on squad car cameras.

“God allowed me to live, and I’ve become a voice for all the victims that did not make it,” Brown said. “It could’ve been any one of us.”

With chants of “CPAC! Fight back!” and “Justice now!” the crowd marched north on the Magnificent Mile towards Trump Tower, where Mensa paused to rap “16 Shots,” his song about the slaying of Laquan McDonald.

Police accountability has been a running theme in the protests against Donald Trump that have converged around Trump Tower in the days since the election. Thousands have marched through the city’s streets in protest of Trump. Many of the marches have been organized or co-organized by young black activists like Lamon Reccord, who has also organized against police brutality.

On November 25, CPAC activists will march the length of the Magnificent Mile as part of a Boycott Black Friday protest against consumerism and corporate behavior, on the busiest shopping day of the year.

Speaking about Trump’s win, Chapman called it a “setback, but not a defeat,” and said it would only fuel demands for police accountability.

“This is unfortunate for the American people as a whole,” Chapman said. “We join progressives in rebuking Trump and fighting the reactionary policies which he is trying to promote. We will continue to fight to get our demands realized.”