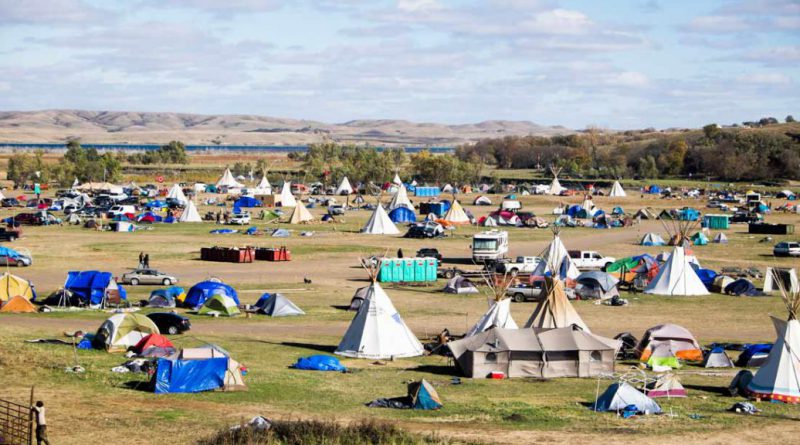 Donnielle Wanatee, a member of the federally recognized Sac and Fox tribe of the Mississippi and the Meskwaki nation in Iowa, made the 735-mile trek to the Standing Rock camp during the first week of October. For the mother of eight children, the Sioux protest in North Dakota touched a nerve.

The proposed pipeline cuts through 18 counties in Iowa, including ancestral Meskwaki territory, Wanatee said as she pointed out Meskwaki and Sac land cessions on a map. The Dakota Access Pipeline, known as the Bakken pipeline in Iowa, crosses the Missouri and Mississippi rivers. Wanatee explained that Sac Tribe Chief Keokuk’s grave is about 5-10 miles south of where the pipeline is going to cross.

“We used to fight them and battle with them for this land right here,” said Wanatee.

She said the Meskwaki nation and the Sioux battled over territory between Iowa and North Dakota between 1677 and the late 1800s.

“The Sioux and the Meskwaki are not alone,” said Patty Loew, a member of the Band of Lake Superior Ojibwe and visiting professor in the Medill School of Journalism at Northwestern University. “As manifest destiny made its way from the East to the West across North America, tribes from the East were pushed out by settlement and that created a domino effect.”

The proposed Dakota Access Pipeline, being built by Energy Transfer Partners, is slated to transport 470,000 barrels a day of domestic crude oil from the Bakken and Three Forks formations in North Dakota through South Dakota, Iowa and into Patoka Illinois, which is an oil transport hub. North Dakota has become the second largest source of crude oil production in the United States, according to the US Energy Information Administration.

The portion of the pipeline being built through North Dakota goes through land adjacent to the Standing Rock Sioux reservation.

The Standing Rock Sioux claim that the construction of the pipeline violates the Fort Laramie treaty of 1868, disrupts sacred burial sites, and contaminates their water sources. Since the beginning of April, the Standing Rock Sioux have been camping, living, protesting, and praying on Army Corps of Engineers land, as well as on private land to protest the construction of the pipeline. The protests, which they prefer to call water protection efforts, have now spanned more than six months, grown beyond the Sioux to include at least 300 Native American nations.

Although women and youth have traditionally not been on the frontline of resistance in past Native American-led protests, Wanatee said the threat to clean drinking water has brought women to the forefront.

Wanatee has traveled the length of the pipeline trying to raise awareness. She brought a delegation of young people from the Meskwaki, who have also been actively resisting the pipeline in Iowa, to the camp to share their experiences.

As dancers cleared the area close to the communal kitchen at the main camp at Standing Rock, Wanatee, members of the Meskwaki Youth Council and Christine Nobiss, an Indigenous organizer from Iowa, spoke to the gathering on October 8th.

“The pipeline over there is working 24/7. They’re drilling, you can hear them drilling from where the camp is,” said Dawson Davenport, a student at the University of Iowa and co-chair of the Native American Student Association. He spoke about the 30 people arrested at the Iowa pipeline protests in Keokuk, Iowa, in what is being called the Mississippi Stand.

Opposition to the pipeline in Iowa has been less prominent than in North Dakota. But the unusual alliance of non-Native-American farmers, environmentalists, indigenous people and libertarians against the pipeline is growing yet complex, according to Nobiss.

Germaine Tremmel, a Sioux elder and United Nations international attorney took the mic after the Iowa delegation. She said her grandmothers had prophesied a time in which Native Americans came together and led the way.

“We’ve come a long way for this day to be here. This day was foretold by our grandmothers and grandfathers. As my relative from the Meskwaki said, ‘yeah, we used to be enemies.’ But that is over now. I want to tell our Meskwaki relatives that you are not alone.”