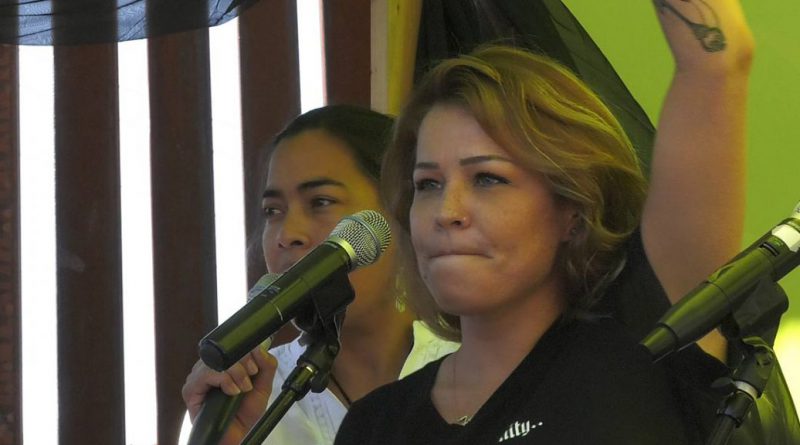 This story was supported by an SJNN Fellowship grant.

(Photo at top: Shena Gutierrez calls for an end to border militarization at a rally on the U.S.-Mexico border in Nogales, Arizona on October 8. (Alexa Mencia/MEDILL)

As the leader of a support network for those affected by U.S. border authorities’ use of force, Gutierrez knows her husband was one of the lucky ones. But after José survived a coma and traumatic brain injuries attempting to cross back into Arizona after being deported, he hasn’t been the same.

“He has multiple personalities now because of the trauma he sustained. I don’t ever know what my day will look like,” Gutierrez said.

Gutierrez believes that José was beaten unconscious by federal border agents inside the San Luis Port of Entry in Arizona. He had lived in Los Angeles ever since he was 9 years old. In March of 2011, José was summoned by immigration authorities, separated from his wife Shena and two young children and deported to Tijuana, Mexico. Like many other deportees with family in the United States, José tried to return to them. But an altercation with agents led to permanent brain damage for José, plus seizures and few answers.

When Shena Gutierrez arrived at the Phoenix hospital where José was taken after the incident, an agent told her that her husband was tased as he was trying to escape from his friend’s car, fell and suffered serious injuries. Later, a representative from the Mexican consulate told her that agents told them that José was tased after becoming combative while under interrogation in an inspection office, and that his fall caused the injuries. An incident report that is heavily redacted supports that version. [See copy of the report here.]

Shena believes that José tried to escape custody, was tased, and dragged back to an inspection office where he was beaten.

Since then, Gutierrez has worked tirelessly to hold the officials who injured her husband accountable—with little success. José’s case was closed in March because of insufficient evidence. However, Gutierrez supports other victims and families in holding U.S. Customs and Border Protection officers and U.S. Patrol agents accountable and in advancing the conversation about excessive use of force by law enforcement in general.

To that end, Gutierrez helped found the Border Patrol Victims Network, an emotional support group for families and individuals who have been affected by border authorities’ use of force.

“It’s easy to brush off someone who is speaking for somebody else, but it’s more difficult to brush off the voice of the families, of the people who are going through this pain,” said Ana Maria Vasquez, a network volunteer.

U.S. Customs and Border Protection reported a 26 percent decline in uses of force from Fiscal Year 2014 to 2015. CBP has outlined specific guidelines on what types of force are to be used—whether lethal, like firearms, or less-lethal, like tasers and batons—and under what circumstances.

Chris Rickerd, policy counsel at the American Civil Liberties Union, explained that CBP had not maintained proper use of force reporting in the past but has remedied some of the data collection and public transparency recently.

Christiana Coleman, public affairs officer for CBP, pointed to the commissioner’s June  findings from four use of force cases as one of the efforts to become transparent.

However, CBP’s incident reports, which are available to the public through Freedom of Information Act requests, don’t identify whether the use of force was deemed excessive.

“This reporting doesn’t say whether the uses of force were within or outside policy, doesn’t say anything about disciplinary consequences, doesn’t identify whether injuries took place,” Rickerd said.

For families or individuals affected by the use of force by federal authorities, this can be unsettling.

CBP takes complaints of excessive use of force seriously, said Coleman, though the agency doesn’t have a timeline to respond to complaints because each incident requires a different level of investigation. State, local or other federal agencies reviewing an incident can also affect the length of time for CBP to respond.

Gutierrez has also had personal experiences—other than her husband’s—trying to pursue a complaint. She says she was targeted when crossing the Nogales border to attend a vigil for José Antonio Elena Rodríguez, a 16-year-old who was shot in the back multiple times and killed in a cross-border shooting after allegedly throwing rocks at agents. Gutierrez was wearing a shirt she made herself, one she wears often. In large writing, the shirt reads, “Truth… Accountability… Justice! Stop Border Patrol Brutality!” above a photo of José, lying comatose in a hospital bed. Gutierrez says port of entry agents took notice and asked her inappropriate questions, like “who are you with?” and “why are you here?” She said they also forcibly grabbed her arm, bent her over a metal bar, and detained her in rooms without surveillance cameras. They refused to give her the agents’ names so she was unable to file a complaint, she said. CBP confirmed that they had no record of her complaint.

Gutierrez has the luxury, though with difficulty,, of passing through ports of entry freely because she is a U.S. citizen, and she uses that advantage to comfort families affected by excessive use of force at the border.

“A lot of them, because they are undocumented, they can’t really be traveling,” Gutierrez said. “So, I try to go to every family whenever possible and give them that encouragement, that although our cases were closed, it doesn’t mean that we have to give up in the fight for justice.”

Gutierrez believes that there are far more cases of verbal and physical abuse by federal officials than those filed. “They threaten. They intimidate. They instill that fear into you,” Gutierrez said. “I’m pretty positive that there are a lot of people out there, especially undocumented, and they’re afraid to come forward because of what could possibly be done to them.”

“I know that we are not the first,” Gutierrez said. “We’re not the last.”

Alexa Mencia is a Medill graduate student with a specialization in Social Justice & Investigative Reporting. Follow Alexa on Twitter @asmencia.