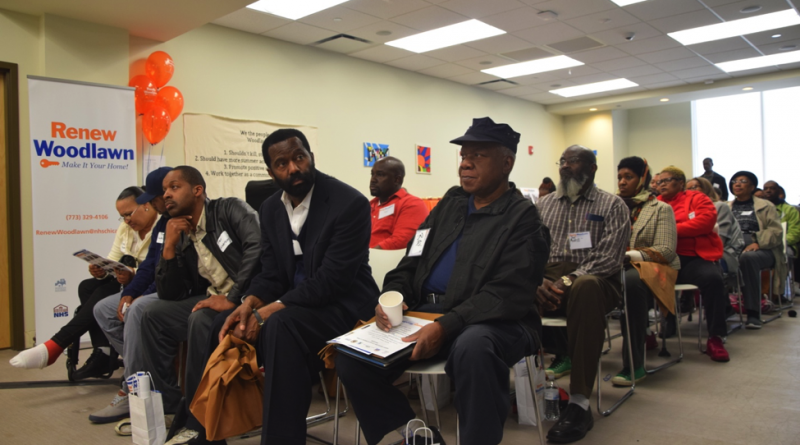 In 1983, Ronnie Nelson bought his first two-flat on Rhodes Avenue in Woodlawn. This May, he and a roomful of people at the Woodlawn Resource Center celebrated his daughter Courtney becoming a first-time homeowner in the neighborhood, with assistance from the Renew Woodlawn Homeownership Program.

Courtney Nelson is ready to move into a rehabbed vacant two-flat at the intersection of 61st St. and Saint Lawrence Ave. Through the program, she received a $15,000 grant for down payments from Neighborhood Housing Services of Chicago Inc. (NHS) and more than $26,000 for closing costs from other programs including the city’s Home Buyer Assistance Program.

Increasing homeownership is an important way to stabilize and improve an area like Woodlawn, a neighborhood with relatively low homeownership rates. Renters generally feel less invested in a neighborhood and landlords often don’t do a good job maintaining rental properties, according to Spencer Cowan, who recently retired from his position as vice president of research for the Chicago-based Woodstock Institute.

According to the U.S. Census Bureau’s 2014 American Community Survey, only 17 percent of the total 13,548 housing units in Woodlawn were occupied by homeowners, whereas the number for Cook County is 51 percent.

Preservation of Affordable Housing (POAH), a non-profit organization, initiated the Renew Woodlawn program. Two other Chicago nonprofits have partnered with POAH, NHS  and the Community Investment Corporation (CIC). NHS provides construction services by finding contractors to inspect and rehab the homes. CIC is one of the lenders for the acquisition and rehabilitation of the housing.

“There are a lot of small buildings in the community, particularly in West Woodlawn, that are vacant and underutilized. But they are some nice properties that have potential,” said William Eager, vice president of POAH Chicago. “They need some investment and new homeowners. They need some team to purchase them, rehab them and resell them.”

Nelson is the first person to benefit from the program. “People need to take advantage of the opportunity,” she said.

“It makes a big difference in how the community turns out in the future,” she said. “When you invest in me, you have me as a homeowner in the community, I will make sure that I invest in the neighborhood, make sure that the block is clean. I’ll partake in the organizations and activities to keep this area up … so it can just be like Hyde Park, up north, downtown.”

Increasing homeownership is part of various ongoing efforts to revitalize Woodlawn, a once-prosperous and lively neighborhood that was decimated by white flight and lack of investment over the past half-century. In 1960, the neighborhood had a predominantly black population of 81,000. But it fell to 25,938 in 2000, according to the U.S. Census.

Alderman Willie Cochran, whose ward includes Woodlawn, said he does not think low homeownership rates are a major problem in the neighborhood, though he has advocated for more economic development.

“The percentage of high rental housing and low homeownership depending on location does not mean it is bad,” said Cochran, by email. “Especially in urban cities, rental (Loop / Downtown) exceeds homeownership. It is important that we address the economy, as it is the ultimate definer of how this balance will change.”

Eager from POAH told SJNN that a mix of rental and for-sale housing is important to a healthy urban community, but he expects to see the number of units available for homeownership rise in Woodlawn since many developers have been breaking ground on new for-sale projects. For example, KMW Communities plans to build 25 new single-family homes in northeast Woodlawn in the fall, said Eager. POAH is also working to bring in new retail and commercial amenities that typically help drive homeownership.

Renew Woodlawn plans to assist 20 prospective homebuyers in the community by the end of September 2017.

Jaucinta Echols hopes she is one of those homebuyers some day. Echols lives in a two-bedroom apartment with her husband in a four-unit apartment on S. Langley Ave. They moved here from Hyde Park because the rent is lower.

“We eventually want to buy a home,” said Echols, standing outside of her temporary residence.

Echols said she hopes the government will encourage people to take better care of their properties, and offer incentives that will help people start buying homes again.

In addition to the proliferation of rental properties, there are also a lot of abandoned buildings and vacant lots in the area. Echols said that is not necessarily a problem, “as long as they are kept by some kind of owner. But when there’s easy access into these buildings, it’s unsettling, because you never know who is there.”

As a renter, Echols said she doesn’t feel committed to the community.

“I’m here. I just live here. When I leave my house, I’m in my car, and I go to work, or I go to my parents’ house,” said Echols, who works at the Illinois Institute of Technology. “I don’t do too much around the area.”

According to the U.S. Census Bureau’s 2014 American Community Survey, in census tract 4207 where Echols lives, only 66 percent of the 1,770 units were occupied, and 78 percent of them were renter-occupied. According to data made public under the Home Mortgage Disclosure Act (HMDA), the lending in this tract in 2014 was $1,078,000, and 70 percent of it went to non-owner-occupied housing.

Out of every seven housing units in census tract 4207, only one was occupied by a homeowner in 2014. (Yingxu Jane Hao/SJNN)

George, who declined to give his last name, lives just a block north of Echols’ apartment. He took over the house from his parents when they passed away, and he made a lot of efforts to improve it, including installing several security cameras, he said.

More homeowners in a neighborhood not only creates more trust between neighbors and more investment in the neighborhood, it also has concrete economic impacts.

“Homeownership is still the number one way that minority people can elevate themselves into a different economic status,” said John T. Newman, a residential loan officer at the Associated Bank. He added that homeownership gives people the chance to get cash through refinancing. “Homeownership has sent a lot of kids to college,” he said.

“Homeownership is a business, and that’s how you need to look at it,” Newman continued. “It’s not only your place to live. It’s an investment. As you pay your mortgage down, you are building equity. So there are several advantages to homeownership, not to mention the pride of homeownership, the stability it brings to any community.”

Nelson said the property she purchased is also an investment for her 8-year-old son.

“I’m investing in his future so that one day he’ll have his own place,” she said.

She might rent one flat out, but she said, “I don’t intend on selling, because this area is going to be just like Hyde Park.”

She pointed out that it is close to the Green Line L train and to the University of Chicago.

“I know it will be worth something in the future,” she said. “This is my asset. We want to make sure that the asset is protected.”

Check this website for more information about the Renew Woodlawn Homeownership Program.

Yingxu Jane Hao is a graduate student at the Medill School of Journalism. Follow Yingxu on Twitter @Jane_YingxuHao.