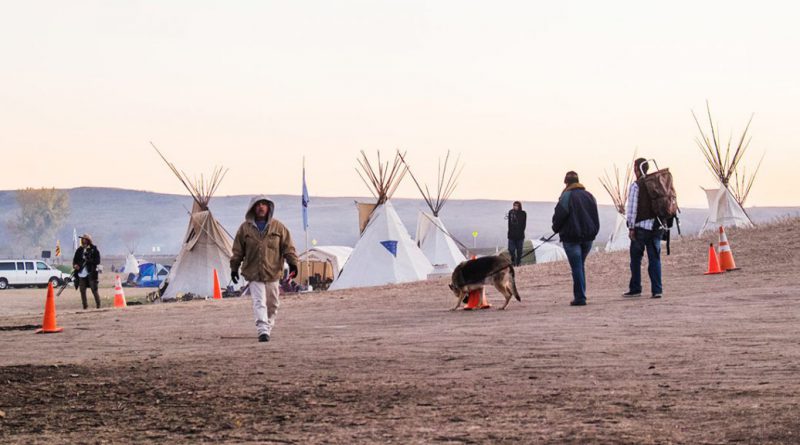 By Pat Nabong and June Leffler

CANNON BALL, NORTH DAKOTA — Opponents of a controversial oil pipeline being constructed near Standing Rock Sioux Reservation are about to face a bitter winter. Camping near tents near Cannonball River, current temperatures hover in the mid-30s and are expected to drop to zero by January.

“It’s freezing cold. We’re just really cold,” said Daphne Singingtree, a retired midwife from Eugene, Oregon, who serves as an herbalist in the camp’s medical tent. “If it’s like this, I don’t know what it will be like in the middle of winter.”

Roughly 1,000 to 2,000 people are camping near Cannonball River, said to be the largest gathering of Native Americans since Little Bighorn in 1876. Some protesters  have been encamped since April in opposition to a $3.8 billion oil pipeline being constructed by Energy Transfer Partners, expected to run from North Dakota to Illinois. This pipeline disrupts sacred burial sites of the Standing Rock Sioux Tribe and is feared to contaminate the Missouri River, the tribe’s main water source.

Winter in North Dakota typically lasts from November to March, with three to four severe winter storms every year, according to the North Dakota Department of Emergency Services.

Singingtree says frigid temps could keep protesters away and cause others to pack up and leave. Despite risks of frostbite and hypothermia, opponents of the pipeline are preparing for a brutal winter.

“My circulation in my hands and my feet — in fact you can see it already it’s red — and there’s nothing I’m going to do to improve my circulation,” said Andy Kilchrist from South Louisiana, at the camp for three weeks. “So at some point soon, I’m going to have a slight case of frostbite. And when that happens, I leave.”

Protesters are currently camping on U.S. Army Corps of Engineers land and private property owned by supporters. On Wednesday, the Standing Rock Sioux Tribe decided to accommodate campers on reservation lands, two miles from the current camp. Permanent structures are on the way to both sites.

Gearing up for winter

If there is any group who can survive North Dakota winds with minimally constructed shelter, descendants of those who toughed it out hundreds of years ago are savvy enough to figure it out.

While campers, many of whom are from local Native American tribes, are considering using shipping containers and wooden structures as shelters, they are also considering traditional housing, including earth lodges and tepees, according to Linda Black Elk, an ethnobotanist at the camp’s medical tent.

Earth lodges are permanent dome-shaped homes made from dirt and a log framework. They are also a traditional form of native housing specific to the area of the protests: Tribes that include the Mandan, Arikara and Hidatsa have historically used this shelter.

“These people have been working on this technology for thousands of years,” said Joel Preston Smith, a volunteer at the camp medical council.

The tepee is an iconic, almost stereotypical, symbol of Native American history, but it is a practical solution for protest on the windy plains. The conical shape and multiple supporting poles provide a stable structure in wind gusts. Conventionally made of buffalo hides, the lining insulates, while the opening at the top provides ventilation necessary for keeping a warm and safe fire.

“It wasn’t hundreds of years ago that people were doing this. People are doing it now,” said Singingtree, who owns four tepees. She hopes to use her 20-foot tepee to use as emergency shelter for anyone who needs it.

Singingtree said the portability of tepees also lends itself to the larger protest movement: “We are going to stop the Dakota Access Pipeline in this area. I’m confident in that. We all might go to [pipeline’s construction sites in] Iowa next.”

[This story and others on the Standing Rock-Dakota Access Pipeline controversy have been supported in part by SJNN and the McCormick Foundation.]