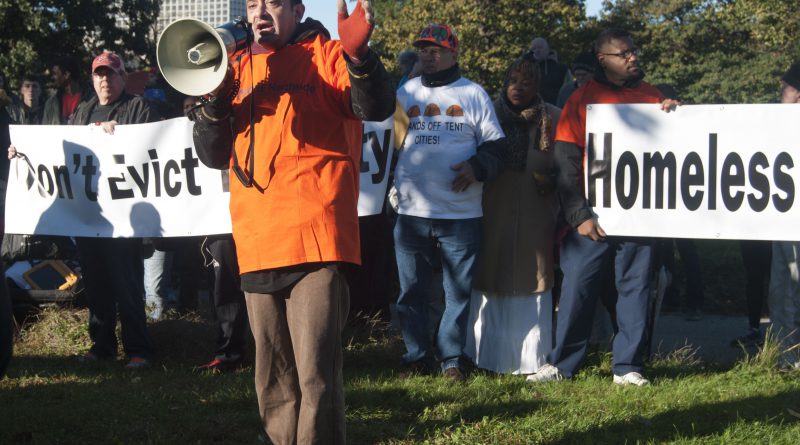 Dozens of demonstrators flooded out on to Lake Shore Drive on the morning of Oct. 13 carrying tents and banners to advocate for more housing for Chicago’s homeless and to call on Mayor Rahm Emanuel to allow residents of Uptown’s Tent City to continue living under the neighborhood’s viaducts until permanent housing is provided.

Police quickly corralled protestors who stopped traffic for about five minutes just before 9 a.m. on southbound Lake Shore Drive near the Wilson Avenue on-ramp. Amongst the last protestors to remain on the road, Debra Miller stood blocking traffic with her walker, alongside her husband, Jimi Miller, a fellow activist from the Jane Addams Senior Caucus.

“We were homeless in 2010, and we learned quickly that the city of Chicago doesn’t care,” said Debra Miller, who was homeless for 19 months. “We’re determined to give back and have been working to help homeless people since then.”

After living in separate shelters on the North and West sides of the city, the Millers qualified for a veterans’ housing voucher through the Chicago Housing Authority’s Housing Choice Voucher program. Debra Miller said they live in a “wonderful” apartment in Edgewater, where under the voucher program they are supposed to pay 30 percent of their income to rent with the housing authority picking up the rest.

“Poverty stinks,” Debra Miller said. “We pay closer to 40 percent because CHA screwed us and let the landlord raise our rent without our knowledge. They did a quiet negotiation.”

The Millers were amongst more than 100 other demonstrators representing tent city residents and community groups, many belonging to the Chicago Housing Initiative (CHI), a coalition of community organizations working to increase the social, economic and political power of low-income families. The march began at the Peoples Church of Chicago and continued along the lakefront path to Wilson Avenue, Marine Drive and onto Lake Shore Drive.

“The city refuses to give us help where it’s needed. We continue living under these bridges doing the best we can,” said William Matos, who has lived in the Uptown Tent City for more than four years under the Lawrence Avenue viaduct. “We are human beings just like you guys are. We deserve the same rights.”

After living in Hyde Park for more than 20 years, Angela Lacey, a CHI representative, was told her landlord no longer accepted her CHA voucher in 2014 and she became homeless, she said. She and other activists are encouraging the Chicago City Council to adopt the Keeping the Promise Ordinance, which they say would reduce homelessness in Chicago and increase access to affordable housing through reforms of the Chicago Housing Authority.

“[The mayor] doesn’t want to be held responsible for the havoc he is wreaking on our lives,” said Lacey, who is also part of the Disability Rights Action Coalition for Housing, which advocates for housing rights for people with disabilities, especially those in public housing.

Police officers were at the protest and one demonstrator from the community organization, Southside Together Organizing for Power (STOP), was arrested and charged with blocking traffic, according to Vivien Tsou, a community organizer with ONE Northside, which works to unite the North Side’s diverse communities.

“We’re here to make sure they have the right to express their rights in a safe manner,” said Paul Kane, a captain with the Chicago Police Department.

No tents were removed from the Uptown Tent City on Oct. 14, as city officials had previously announced might happen. Tsou said the residents did not receive a direct announcement from Emanuel but caseworkers told them their tents would not be taken away without a tag being placed on the tent and a 7-day notice.

“While nothing was taken last Friday, there is no guarantee about it in the near future,” Tsou said. “We are still pushing together to make sure residents can stay until they get permanently housed.”

Alexandria Johnson is a multimedia journalist with specializations in video storytelling, documentary production, investigative reporting and social justice journalism. She is a recipient of a Master’s and Bachelor’s degrees from Northwestern University’s Medill School of Journalism. Follow Alexandria on Twitter @alexandria1007.