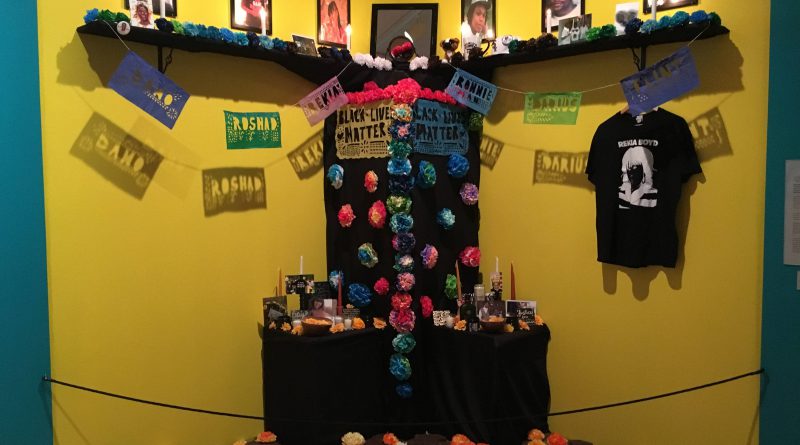 The altar rises in a corner, draped in black and ornate with flowers, candles and pictures of young African-American men and women before they became victims of police violence in Chicago. Their names  – Dominique “Damo” Franklin, Roshad McIntosh, Rekia Boyd, Ronald “Ronnieman” Johnson, Darius Pinex, and Flint Farmer – are carved out of colorful tissue papers, alongside the slogan Black Lives Matter.

The annual Dia De Los Muertos (Day of the Dead) exhibit at the National Museum of Mexican Art in Pilsen celebrates its 30th anniversary this year—it first opened in October 1986—as well as the victims of events that have fueled the national conversation on police and gun violence. Along with the Black Lives Matter altar—a creation of Monica Trinidad, a Chicago artist and community organizer (and SJNN staff member) —the exhibit also features an installation dedicated to the 50 victims of last June’s shooting at the Pulse gay nightclub in Orlando, Fla.

“Every year we remember those who are killed in a tragedy,” said Cesaréo Moreno, the exhibit’s curator. “Including Black Lives Matter in the exhibit was very important, because it really makes us refocus and look at this craziness, and try to understand the complexity in these issues.”

Mexico celebrates Dia De Los Muertos between Oct. 31 and Nov. 2. Moreno said it is customary for a whole town to gather at a cemetery and eat, drink and bond in both mourning and celebration of the lives of those who have passed. The holiday has gradually gained popularity in the United States too. In Chicago, Moreno said, the Pilsen exhibit has played a major role in introducing Chicagoans to Dia De Los Muertos.

“Thirty years ago, nobody knew what this was,” Moreno said. “People didn’t understand the word ‘dead.’ Now it is part of the city of Chicago.” He added that the introduction of the Day of the Dead tradition in American culture has made the conversation about death less scary and more normal for many Americans.

“[The U.S.] doesn’t like to look death in the face,” Moreno said. “This tradition lets you talk about it. Until you start talking about it, you won’t be able to understand.”

This is why, according to Moreno, the holiday of Dia De Los Muertos is relevant to the debate on gun violence in the country, as brought forth by tragedies including the shooting in Orlando and the repeated fatal police shootings of black youth in Chicago. Along with commemorating the dead and helping the living grieve, the altars are meant to sustain the push for justice and change around gun violence.

“When we lose someone in a tragedy, one of the most human responses is to not forget,” Moreno said. “Day of the Dead is a way to do that. It becomes a cry for justice.”

A rainbow drape covers the altar in “Ofrenda for Pulse nightclub,” by Wanda Raimundi-Ortiz. Several white and rainbow skulls stand on the altar under the hashtag #OrlandoUnido and the flags of Mexico and Puerto Rico.

Moreno and his staff spend about a year planning the installations. It then takes about five days to install the altars on site. Moreno said the exhibit always includes a selection of more traditional ofrendas from Mexico, a few altars dedicated to contemporary affairs, and an altar designed by a local Chicago school.

This year, students at Solorio Academy High School on the Southwest Side installed an ofrenda for the school’s namesake Eric Solorio, a Mexican-American Chicago police officer killed in a car crash while on duty in 2006. The ofrenda features Solorio’s pictures and personal items and two Chicago flags in ceramic tiles.

“He was a great guy and a great cop, a real role model,” Moreno said. “This was an opportunity for the school to learn both about a Mexican tradition and the person. These days in particular, it’s not a bad idea to look for police officers who are good examples.”

Moreno said that even though Dia De Los Muertos has contributed to normalizing the conversation on death in the United States, he fears that as the tradition gains a more prominent spot in popular culture, it might lose its essential spiritual components.

“Spirituality is what makes [Dia De Los Muertos] powerful,” said Moreno, now in his 10th year curating the exhibit. “Spirituality is the reason why this tradition has lasted for so long.”

The holiday’s deeper meaning could be lost as American society seeks to capitalize on it, since it’s hard to sell the intangible for a profit, Moreno explained. He said he is keeping this concern in mind as he goes about curating the annual exhibit.

“We try to show the spiritual side with a number of things, like incense on the altars,” Moreno said. “It’s our job as a museum to remind people that Dia De Los Muertos has a stronger meaning than just bright colors.”