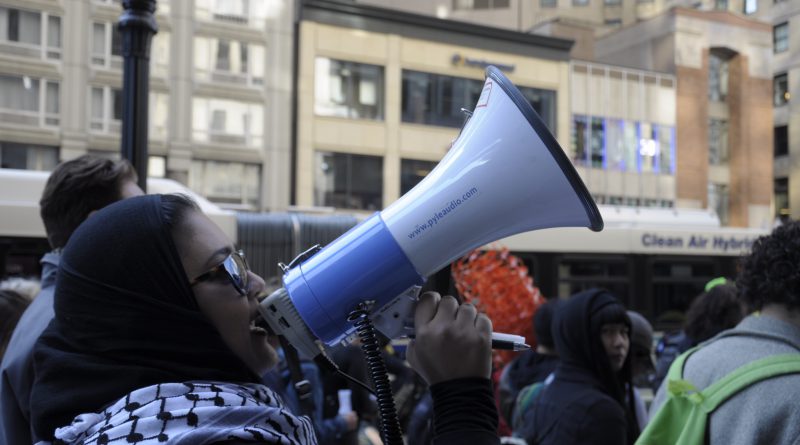 CHICAGO, IL – Fifteen community members chained themselves together across the intersection of Michigan and Wacker, disrupting one of downtown Chicago’s busiest streets for an hour and a half. The #StopITOA coalition, a group of Chicago community organizations, expressed deep concerns about anti-Muslim and hyper-militarized tactical training at the Illinois Tactical Officers Association’s (ITOA) 2016 Tactical Training Conference taking place at the Stonegate Conference and Banquet Center in Hoffman Estates from October 9-13. #StopITOA Coalition demands include an end to the police militarization, Islamophobia and Donald Trump-style fear-mongering which ITOA promotes. The action was led by several Chicago-based organizations, including American Friends Service Committee – Chicago, For the People Artists Collective, Organized Communities Against Deportations, Assata’s Daughters, and more.

Medill Student Corey Mueller documented the action that lasted over 90 minutes across Michigan Avenue. Click below to view photos:

“We see this occupation continuously in our communities here in Chicago, where the police are seen as a constant threat,” said Kofi Ademola of the Black Lives Matter movement, as he described the violence perpetuated against the black community by law enforcement personnel in the city.
Ademola claimed that ITOA’s conference was anti-Muslim, anti-black and anti-poor. “They do urban training, they train in urban settings, so whose community is that? That’s my community; your community. That means they are preparing to put a target to my head.”