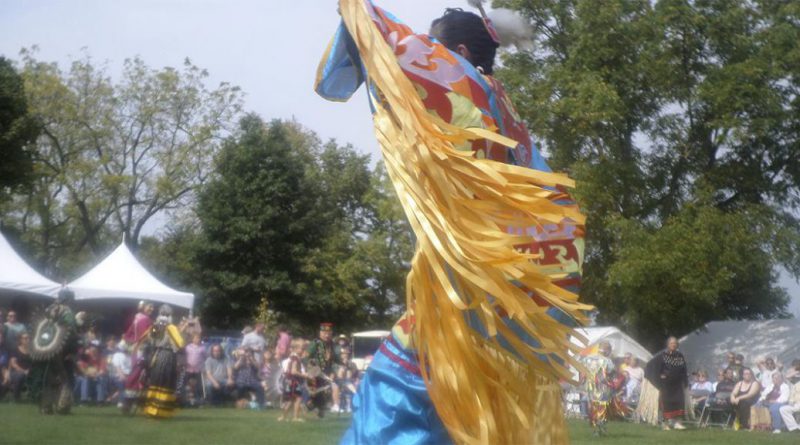 Every year, west suburban Naperville welcomes the Harvest Powwow, a rare occasion for non-natives to experience some representation of what Native American culture is.

With a captive audience and a mic in hand, Mark Denning of the Menominee Tribe in Wisconsin apologized to the crowd. He knew things were going to get political.

Pointing to a blanket in the middle of the performance area, Denning said, “corporations are telling you what to think. This is your chance to tell them what you think. On that blanket, all the money goes to support Standing Rock, these are real men and women taking a stand… they aren’t going anywhere.”

Denning spoke about the resistance of the Standing Rock Sioux Tribe near Cannon Ball, North Dakota to the construction of the Dakota Access Pipeline, a 1,172-mile crude oil pipeline that would run from North Dakota to southern Illinois. The pipeline would cross the Missouri River and construction has already bulldozed burial and sacred sites.

Significant pipeline spills in the US totaled 132 last year and 80 so far in 2016, CNN reported recently.

With 6,000 people attending the powwow, donations for Standing Rock totaled between $2000 and $3000, according to Midwest SOARRING president and founder Joseph Standing Bear Schranz. The organization will use the money to stockpile and deliver supplies to the tribe and camping protesters, a gathering of people from over 200 native nations.

As the winter sets in, it is even more critical to support those in North Dakota, said Schranz, adding that “20 to 30 degrees below zero can be a bitter experience.”

Roughly 400 powwow attendees signed a petition in support of the protesters. The petition will be sent to the White House.

Rose Collins from Des Plaines signed the petition, saying she was well aware of the issue before the powwow.

“If I didn’t have a husband and kids, I would be there,” she said.

Collins has been coming to the gathering for years, saying it is a “powwow of the heart.” She most appreciates the acceptance of those who aren’t full native or native at all.

“We need help from all races and communities,” said Denning. The U.S. Census Bureau estimates that there are 5.4 million Native Americans and Native Alaskans, comprising 2 percent of the entire US population.

“Our creator loves diversity,” said Moses Brings Plenty, actor and member of the Pine Ridge nation. “That’s why there isn’t one tree or one bird.”

The powwow is the largest fundraising effort for Midwest SOARRING, an organization of inter-tribal and non-native members dedicated to promoting cultural awareness and addressing social, environmental and economic issues Native Americans face.

Schranz, from the Chippewa White Earth nation in Minnesota, is 67 and has been an activist for 50 years. While making rounds of the powwow premises, Joseph was constantly stopped by acquaintances.

“These are all good people,” said Schranz. “I respect everyone equally until they’ve proven themselves otherwise.”

Pam Wilkes and her 14-year-old daughter Katie are of the Arikara tribe in Newton, North Dakota, but they have been living in Wonderlic, a town just south of the Wisconsin border. Neither grew up amongst their tribe, but both have been a part of Midwest SOARRING for all of Katie’s life. Katie is now the “princess” of the organization and goes to schools and other organizations giving cultural demonstrations.

“I respect things a bit more. I understand where I came from,” said Katie. She feels what is happening in Standing Rock is unfair, and it makes her realize that basic things, like water, can so easily be taken for granted.

“I want what’s in the best interest for today and for tomorrow,” said Pam Wilkes. “We need to understand what we are going to leave for future generations.”