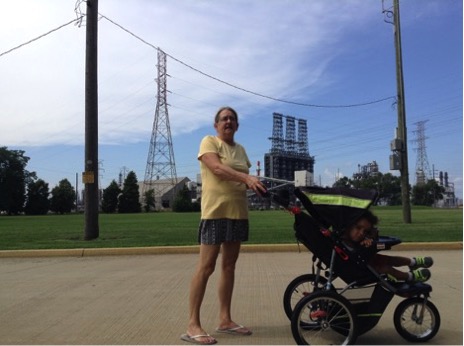 (Featured image: “God knows what they are doing to our health. It can’t be proven, but we know,” said Rodriguez on August 18 as she walked her grandson through Marktown. Cloee Cooper/Medill)

When you drive into Indiana from Chicago along the shore of Lake Michigan, you see a large expanse of industrial landscape and the BP Whiting Refinery, one of the country’s largest and oldest refineries. Among other things, it processes crude oil from the Canadian tar sands. It’s so thick that it has to be thinned with caustic dilutants before it can even be transported. Tucked between the BP plant and the ArcelorMittal Steel mill is the small historic worker community known as Marktown, a designated historic district within the town of East Chicago.

Marktown was built in 1917 by Mark Manufacturing Company to provide housing for steel mill workers and their families.  This addressed the need for quality housing for workers and helped reduce high turnover rates at the steel mills, at a time when there was a massive influx of people to the Midwest. Spread over 40 acres of land, Marktown had 200 residential units. The 1930s census shows a residency of 875 people.

Mark Manufacturing’s Indiana Harbor Works, which later became a part of ArcelorMittal, is the largest steel manufacturing company in the world, controlling 5 percent of the worldwide market. The steel mill employed 14,000 workers at its peak.

In 1975, Marktown residents successfully petitioned to add Marktown to the National Register of Historic Places. Now, residents of this worker community no longer share a common workplace. Several residents work at the nearby Indiana Harbor Works, others at a trucking company, but the majority are marginally employed and low-income.

And today the community’s very existence is threatened.

The adjacent BP oil Refinery started buying property from Marktown residents in 2012, demolishing homes and planting grass in their place. Residents of Marktown protested the expansion of BP into Marktown, and they fear BP will eventually buy out Marktown altogether.

Kim Rodriguez serves as the precinct committeewoman representing the area and founded the group Save Marktown after BP Whiting officials confirmed their interest in buying property.

“I never in my wildest dreams thought that this community was not going to be here anymore,” said Rodriguez, a third-generation Marktown resident who raised six children there, four of whom still live in Marktown. “That they (BP Whiting Refinery) were going to buy houses up, tear them down and that the city was going to allow that. We are historic.”

The BP Oil refinery, formerly Standard Oil, was founded in the 1880s and now spans 1,400 acres. In recent years, BP expanded their facility in order to process the thick, asphalt-like crude tar sands from Alberta, Canada. Tar sands is often referred to as the dirtiest oil on the planet. The refinery now has the capacity to produce 430,000 barrels per day of refined oils and asphalt. Since the expansion, people are concerned about the additional pollution of the water in Lake Michigan, the air in East Chicago and the possible end of Marktown.

Josh Mogerman, spokesman for the Natural Resources Defense Council (NRDC), said BP should be doing more to limit air pollution. “We are in the epicenter of tar sands oil production in what is the largest inland refinery in the nation and the largest tar sands production in the country, perhaps the world,” said Mogerman.

Paul Myers, a former member of BP’s citizen advisory board and an enthusiastic preservationist, said BP representatives had promised in writing only a few years ago that they had no intention of ever buying land in Marktown. But one day, a BP representative told him, “things change.”

“It’s just big business taking over the world. It’s offensive,” said Myers. “It’s because if they blow up any part of this plant, and if there is any damage in Marktown, they are going to pay 100 percent of it in damages. They are still paying for the BP oil spill [in the Gulf]. That’s all there is to it. They don’t want to be sued.”

BP spokesman Michael Abendhoff said the company is working with homeowners who voluntarily choose to sell their land.

“We have purchased properties around the perimeter of the plant for years in an effort to create additional green space,” said Abendhoff. “More than a third of the homeowners in Marktown contacted BP about the possibility of selling their property.”

Eighteen-year-old Jaziel Rojas grew up in Marktown on Park Street, one of the more desirable streets in the community. He described the dilemma of living there.

“It’s pretty bad considering you’re breathing in a bunch of junk,” Rojas said. “You get tired when you’re running outside and every morning you find little pieces of metal on the top of your car.”

But like others in Marktown, Rojas didn’t want to see his community taken over by the BP refinery. “It’s tragic because I lived here my whole life and I grew up here, and then it’s all going to be gone one day.”

Hector Rojas, Jaziel’s father, said refinery representatives made an offer to buy their house for $35,000. Rojas said he would consider selling it if BP offered them $55,000.

Rodriguez lives right up the street from the Rojas family. She said she has lived in the area long enough to be exposed to the health risks of living next to a refinery. “God knows what they are doing to our health. It can’t be proven, but we know,” said Rodriguez.

Rodriguez owns her home outright and vows to keep fighting for Marktown. Still, she said she considered moving at one point, but after being diagnosed with Lupus and living on social security, she’s not sure if she can afford any other place with the low amounts BP is offering residents for their homes.

“I’m getting a little discouraged because people I thought were going to stay here and fight with me are giving up,” said Rodriguez. “But on the other hand I still can’t afford to move anywhere.”