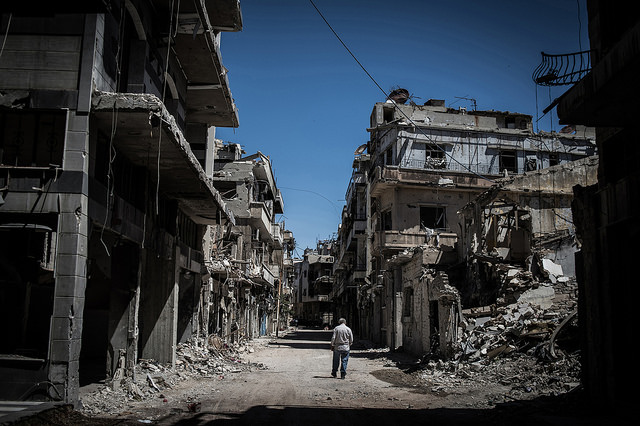 The numbers after a half-decade of war in Syria are staggering. An estimated 470,000 Syrians have been killed, more than four million civilians have fled the country and the U.N. recently reported up to 2 million Syrians lack access to water and electricity in the war-torn city of Aleppo. A discredited government is battling rival militias, including the so-called Islamic State, and powerful countries including Russia, Iran and the United States cannot agree on a way forward.

Despite five years of brutality, the origins of the conflict cannot be traced to a single cause and no one term can fully describe it. Every term carries political and legal implications. Language can galvanize political action, dictate international legal prosecution and compel countries to act. But, as past conflicts in Rwanda, the Balkans and Iraq demonstrate, language can also suppress sympathetic feelings, disguise truths and sustain inaction.

The Clinton administration, for instance, refused to label the events in Rwanda as a genocide until weeks after the conflict began, muting the international response. Nearly two decades later, President Clinton himself admitted the inaction cost thousands of Rwandans their lives. During the Kosovo War, a few years later, Clinton described the conflict as a national security threat to the United States and a forceful NATO military campaign soon followed. While the historical parallels aren’t completely analogous, the lesson is clear – language matters.

If any resolution is to be reached in Syria, the first imperative for government officials, aid groups and journalists is to tell the story of Syria’s civil war comprehensively, reasonably and accurately. The overriding question: what description is accurate?

Is the conflict in Syria a revolution?

The conflict began in the spring of 2011 as thousands of Syrians – swept up in the democratic ideals of the Arab Spring engulfing the Middle East – began demonstrations against President Bashar al-Assad, who had succeeded his father in 2000. The government responded with deadly force and state-sanctioned violence against protesters followed.

Though there is no universal definition, academic scholars and think tank analysts agree a revolution is a popular revolt against an existing power structure, and the goal of the insurrection is a wholesale re-imagining of government, not simply a new administration.

“It can’t just be a sort of shuffling of the deck within a particular regime.” says David Farris, an associate professor of political science at Roosevelt University. “It has to be some people take the state over and completely change the rules of the game.”

As opposed to other descriptions, the term “revolution” can also elicit more sympathy for opposition groups, especially when it is used to categorize a struggle against an autocratic ruler like Assad. In the United States, this may be particularly true because of the place the American Revolution occupies in popular imagination – liberty-seekers challenging an autocratic king. But even opposition groups – and there are quite a few in Syria– seek different goals with varying tactics, some of them brutal and contrary to international law.

“You might have elements of the opposition that simply want control of the existing apparatus rather than wanting to put some different institutional order into place.” says Farris.

So while the term “revolution” does describe a widespread frustration with Assad’s rule and an attempt to change it, other academics believe the term has outlasted its usefulness.

“I don’t think that it is very helpful today,” says Ian Hurd, a professor of political science at Northwestern University. “Today the conflict is thoroughly internationalized with weapons and fighters from a number of outside parties vying to influence the outcome.”

The change Hurd describes occurred after Assad responded violently to protesters, prompting opposition groups to arm themselves and strike back with force. By mid-summer 2011, armed rebels had organized, in part bolstered by military defections, and the conflict shifted from popular demonstrations to something more accurately defined as war.

Is the fighting in Syria a civil war?

Civil wars are internal fights over political power within a nation, and there are those who say that accurately describes the situation in Syria.

But “civil war” mostly denotes a domestic conflict, undersells the level of outside influence and offers an overly simplistic way of describing the human struggle in Syria. Describing the Syrian conflict as a civil war, then, could inadvertently shift the focus away from the international community’s responsibility to intercede, according to Laith Saud, a visiting professor of religious studies at DePaul University.

“If it’s a civil conflict I don’t have to take sides,” Saud says, speaking from the perspective of the international community. “I’m not morally liable.”

And if there is no urgency to end the conflict, resolution could be slow in coming.

A Gallup poll from late 2013 showed an overwhelmingly apathetic American public wary of more military involvement in the Middle East. Just weeks earlier, reports surfaced that Assad used chemical weapons in an attack on opposition areas around Damascus. Nevertheless, the majority of Americans, according to Gallup, did not favor intervention and Obama’s “red line” — a 2012 statement condemning the potential use of chemical weapons by Assad — was not enforced. Before acting, Obama appealed to Congress to authorize a response but did not receive the go-ahead. This is just one instance where public opinion helped influence government action.

Thus, as opposition groups and civilians withered from international inaction, domestic leaders like Assad can characterize his political detractors as terrorists threatening his rule and Syria’s stability. Indeed, Assad released radicalized prisoners in 2011 to undermine the opposition’s legitimacy.

“He wanted the opposition to not be seen as popular revolt against an unjust status quo but as jihadi militants trying to impose their Islamist agenda,” says Hibbard. “Assad was the knight in shining armor meant to save them.”

Is Assad a terrorist?

Still, as Assad tries to shape the narrative in his favor, his own administration continues to commit acts that closely resemble terrorism, Saud says. Terrorism is understood as deliberate violence against civilians to achieve political goals. But some academics argue states cannot engage in terrorism and add a “substate” or “nonstate” qualification to the definition.

When Assad orders the bombing of a neighborhood and kills civilians in an attempt to cling to political power, most, if not all, of the criteria are satisfied. Other world actors also have a reason to frame their enemies as terrorists.

“There’s a strong interest in presenting your enemies as terrorists since it politically and perhaps legally empowers you to kill them,” Hurd says.

But Hurd and other experts are still reluctant to use the word terrorism, preferring to describe Assad’s actions, while no doubt heinous, as war crimes.

Compounding the issue is the imprecise distinction between civilian and military personnel. Historically, international law defined combatants as individuals wearing military uniforms, but contemporary conflicts like that in Syria often don’t feature regular professional armies exclusively; many people flip-flop between armed and civilian roles as needed.

“I don’t look at war as more moral than terrorism,” Saud says. “He’s a war criminal, Assad is. I don’t care what side anyone is on.”

For many Americans, especially after the 9/11 attacks, terrorism is a powerful descriptor.

In late 2015, just days after the Paris attacks, Gallup reported a majority of American did not favor resettling Syrian refugees in the United States. Many politicians, particularly Republican presidential primary candidates and governors, politicized the immigration issue and described porous borders as a significant threat to Americans.

Media coverage and political remarks used terrorism and national security to frame the refugee question. 31 governors even announced they would try to prevent refugees from settling in their states, despite a shaky legal basis for their refusal. The Gallup poll confirms the power of public opinion on government policy and shows the importance of language.

Just mentioning the word “genocide” elicits widespread sympathy and calls for intervention. But genocide is specifically codified in international law as the systematic destruction of a group based on ethnic, religious or racial identities. Officials are sometimes reluctant to label conflicts as genocidal, so as to avoid an obligation to intervene. There are also ways to avoid the label.

Political identity is not stipulated in the international convention against genocide, and Assad has an interest in framing the violence against Syrian civilians as politically motivated.

But when the term genocide was invoked to describe the estimated 300,000 killed in Dafur or the 800,000 to one million who died in 100 days of savagery in Rwanda, there was no immediate international effort to stop the killing.

Describing the Syrian conflict as a religiously motivated genocide between different sects of Islam can also obscure other factors that fueled the fighting, such as Assad’s style of governance.

“You’re encouraging the audience to set aside all the other reasons for the conflict other than these group identities,” Hurd says. “And in a situation like Syria, it’s pretty dangerous because the political motives, the fight over who’s in charge seem to me to be pretty clear.”

Assad, then, benefits from a sectarian description of the conflict, and that description enables the international community to simply take a “hands off” approach, according to Hibbard.

So where do we go from here?

None of these four terms can accurately and comprehensively describe every aspect of the bloodshed in Syria. But a closer examination of each reveals unique nuances, implications and connotations. A complete understanding of the language used to document the problems of Syria is paramount if any worthwhile solution is to be found.

“It matters what lens you use or what word you use to describe this violence,” Hurd says. “That has implications then for who you are legitimating. These are loaded political terms. They are not self-evident categories.”

Thomas Vogel holds a B.A. in International Relations and Political Science from Lawrence University in Appleton, Wisconsin and a M.S. from Northwestern University’s Medill School of Journalism in Chicago, Illinois.