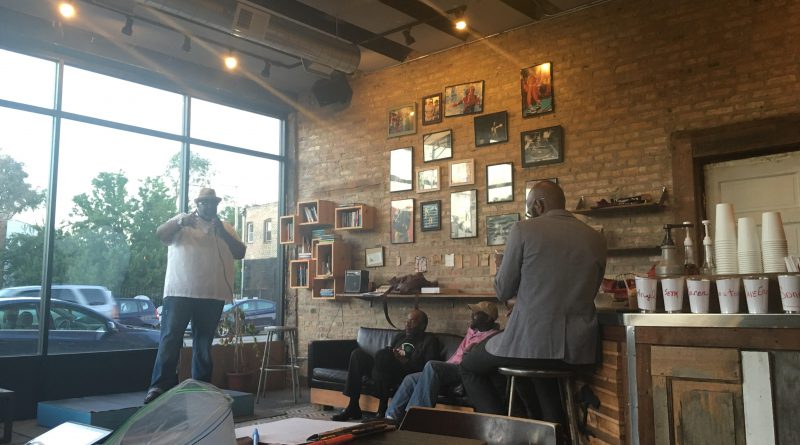 CHICAGO — Some might say there’s not much to laugh about in Englewood. Clarence “Sonny” Hogan and a group of local storytellers disagree.

Five told made-up stories. One told a true tale. At the end of the night, it was up to the crowd to guess who’s who.

About two dozen audience members filled up tables at the small nonprofit cafe. Hogan, who performs under the name Sonny, hosted the night. It was an amateur affair, with at times ear-piercing feedback from the small mic setup bringing the show to a screeching halt (literally). The material was comedic and familiar to the “urban” audience. They exchange knowing glances over their laughter.

Northsiders in Chicago have “The Moth.” Public radio listeners have “This American Life.” Hogan wants to bring the rich tradition of storytelling as performance to the south side.

“Sensationalism sells,” Hogan said of media reporting on crime in Englewood. “There’s a lot of good stuff going on in Englewood, like any community. Since this neighborhood gets such a bad rap, when good stuff goes on people really, really try to promote it.”

Angel Simmons agrees. A lifelong resident of Englewood, she considers herself a spoken word artist. She co-hosts a monthly event at Kusanya called Do Not Submit, which calls on audience members to participate and share their own stories.

“I think it changes people’s perception of what Englewood really looks like,” she says of these events. “These are the stories that need to be told.”

Rewriting the narrative about Englewood is part of the mission of the cafe.

The small corner establishment could easily be confused with any hip, overpriced indie coffee shop tucked into a trendy nook of Wicker Park or Lakeview. Its reclaimed wood tables and “leave a book, take a book” collection are at home among the exposed brick and quirky menu. You can order a “Bernie Mac and Cheese” grilled cheese or a “Mos Def” mozzarella sandwich along with a fruit smoothie and a freshly baked cookie.

Along with the open mic nights, the cafe also hosts yoga, a pop-up bookstore, a produce market and other community events.

“With everything that we do, our mission is to be a place of empowerment and encouragement to the Englewood neighborhood,” says Phil Sipka, executive director and general manager of Kusanya.

A group of Englewood residents launched the cafe in November 2013. “Kusanya” is a Swahili verb meaning “to gather, collect or accumulate.” The residents recognized a need for a community space.

“We looked around and we realized, as we were trying to do some community organizing, that every time we’d meet together about our own neighborhood, we’d have to meet outside the neighborhood,” Sipka says. “There weren’t really any gathering places.”

A six-member board composed entirely of Englewood residents runs Kusanya Cafe. Being a community stakeholder is more important than being a good fundraiser, says Sipka. The cafe prioritizes hiring from within the community.

The unusual choice to operate as a nonprofit organization allows the cafe to run on a combination of grants and donations, in addition to revenue from sales. The mission is to keep the location accessible and affordable to residents.

Carl Felton describes himself as “one of the regulars.” He has been frequenting Kusanya for about two years. As he sits enjoying the “Tuna Turner” sandwich, he pauses to reflect on what the space means for Englewood.

“It’s a place that’s very much needed in the Englewood area,” says Felton. “It gives [people] the opportunity to come in to meet other business people, people from other nonprofit organizations, people from the community. People just from all walks of life.”

Kusanya also draws performers and patrons from outside the neighborhood.

Dave Ebert lives in the suburbs but makes frequent trips to Chicago for improv comedy and storytelling events. He heads up a faith-based improv team called the “Ha Ha Men.”

“I love coming to the city and being a part of things like this because there’s some people in the suburbs who kind of write off the city,” Ebert says. He says his friends worry about his safety, but he doesn’t have any concerns. “I am Christian so wherever I go I’ve got some protection with me. I like to try to be a part of unifying the world as much as I can. I just really enjoy the opportunity to come to the city and perform any way I can.”

At the end of the night the crowd quickly thins out. Hogan packs up his speaker and disassembles the small platform used as a stage.

“I’ve been doing comedy for a while and I think comedy is very, for lack of a better term, spiritual,” he says. “Comedy is an art, so is storytelling.”

Kusanya Cafe is hosting a roundtable event called “The Mis-Education of…” which will be a “candid conversation about the education system” on Saturday, September 10 at 11 a.m.