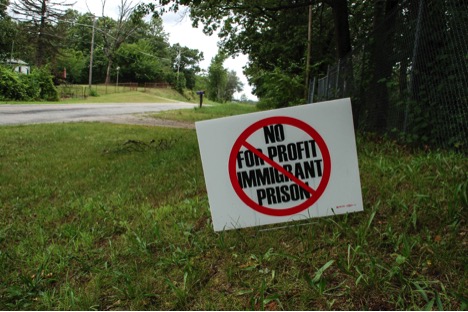 Hopkins Park residents do not want to become a “prison town.”

In recent years, they’ve fought off three prior proposals from town officials to build prisons in the rural village southeast of Chicago. They’re all too familiar with mobilizing opposition, and they’re at it again. This time, the proposed facility would not house criminal offenders but undocumented immigrants in deportation proceedings—a particularly sensitive concept in a town with a quickly growing Latino population. And the proposed center would be run by a private company, an arrangement widely believed to lead to worse conditions and abuses.

Many residents have accused Hopkins Park Mayor Mark Hodge and village trustees of steamrolling through the proposal by Management & Training Corporation (MTC), a Utah-based company that houses immigrants and criminal offenders in its centers around the country.

MTC has applied for a contract with U.S. Immigration and Customs Enforcement (ICE) to build and run a 700-800 bed immigrant detention center in Hopkins Park.

Hodge and his village trustees unanimously authorized the town’s bid for the detention center on March 31, assuring the private company that there would be “little to no opposition” from local residents.

But, many community members said they were never consulted, and they think this lack of transparency was intentional.

“The reason we’re going through all of this is because the mayor has decided that he does not have to listen to us,” explained resident Stephany Hammond, a volunteer at a local school. “Even though we’ve had rallies, he tried to sneak it under the table by not having a township meeting.”

Barbara Rose and her husband recently built a home next to the proposed detention center site. They and other residents collected hundreds of signatures on a petition objecting to the detention center. On July 29, they sent their complaints to MTC and ICE.

“In fact, there were no public announcements made that a public hearing was to be held,” the letter stated. “The few people in attendance appear to have been invited by the mayor.”

Hodge said that the bid for the private immigrant detention center was discussed publicly during regular monthly meetings that all residents are aware of and welcome to attend. There is no set timeline for ICE to grant a contract, and it is not guaranteed that MTC would be awarded one.

“It’s still several steps away, so it would be easy to withdraw that proposal,” said Rose.

Arnita said that MTC would prioritize hiring local residents, and that pay for entry-level correctional officers will be $28 per hour with eight weeks of paid training. To qualify for the position, applicants must have a high school diploma, no felony convictions and good credit.

Because of these requirements, many question whether these jobs will actually benefit the community. “You go into a poor town, who has good credit?” asked Hammond.

Some of these facilities, like Tri-County, are more than 350 miles and up to six hours’ drive away from Chicago. Communication and transportation are obstacles for families trying to visit detainees or detainees trying to access legal representation. Only 70 miles away from Chicago, Hopkins Park would be a more accessible detention center. Some experts think ICE would consolidate other operations into the Hopkins Park facility, should it be approved.

Fred Tsao, senior policy counsel for the Illinois Coalition for Immigrant and Refugee Rights, said that there are good reasons to bring detainees closer to Chicago. But he has serious concerns about a privately run facility.

“People would be making money off of this, and particularly companies that have a really horrible track record of mishandling situations, training their staff badly, denying people medical care, and otherwise treating their detainees really badly,” Tsao said.

Last year, MTC was the subject of substantial controversy after its facilities in Kingman, Arizona saw two riots injuring 16 people; and its Willacy, Texas facility housing immigrants and nonviolent drug offenders was destroyed by detainees who complained of harassment, poor conditions and inadequate medical care. The Texas facility detained hundreds in Kevlar tents with overflowing toilets and no privacy.

Following the recent release of an investigative report, on August 18 the Department of Justice announced a phasing out of private prisons. The bureau advises that private prisons approaching the end of their contracts should not be renewed or should be substantially reduced in scope, a decision that will lead to the closing of private prisons over the next few years. The Justice Department’s announcement does not cover private immigrant detention facilities which fall under the Department of Homeland Security. Meanwhile Democratic presidential nominee Hillary Clinton has called for an end to privatizing prisons as part of her platform.

Beyond concerns about private management, the Hopkins Park proposal feeds into a larger debate about the future and identity of the town. For many residents, Hopkins Park is a getaway location, a place to enjoy nature, privacy and acres of peace and quiet. They suggested opening tourist attractions like campgrounds, open-field fishing holes, or mom and pop shops to spur economic development.

“How many businesses do you think are going to open up when all you’ve got is a prison?” asked Raul Hernandez, a professional driver and key organizer against the detention center.

“We have an economic base to start with,” Hammond agreed. “The prison is going to shut it down.”