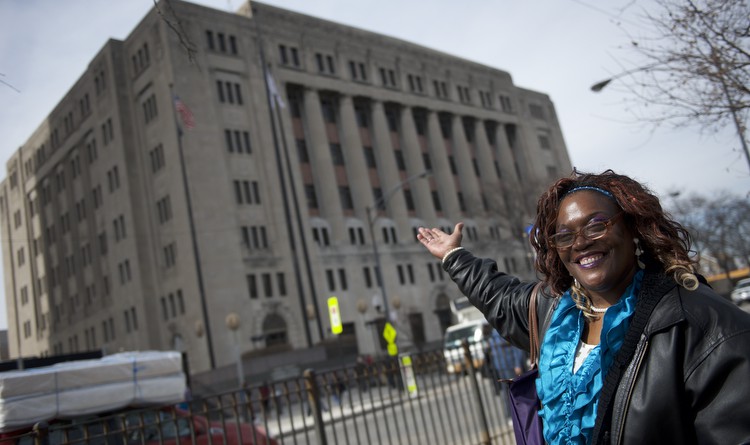 Latina Douglas spent more than half her life in “a blur of petty crimes and prostitution, drug use and dozens of arrests,” as SJNN Fellow Bill Healy reported in a story aired June 3 on WBEZ public radio.

Like countless other people cycling through the criminal justice system in Chicago and around the nation, Douglas’s difficulties were driven by mental illness.

But Douglas has managed to turn her life around, thanks to her brave efforts and an innovative Mental Health Court program that, while small, offers hope for breaking the cycle of mental illness and incarceration.

Latina Douglas never fit in as a kid. She was bigger than most girls her age and her classmates teased her. After being chased home and having her glasses broken, her uncle encouraged Douglas to push back. So she went to school and started the fights.

“As if to say, ‘Well, bring it on.’ You know, I had that mentality,” Douglas said. “‘Let’s do this.’ So the school finally called my mom and told my mom I couldn’t come back to school, that I had to go Englewood Mental Health.”

A doctor there told Douglas she was mentally handicapped. Later she found out she has schizophrenia and bipolar disorder. She tried smoking marijuana, which she liked. Then around age twelve, she tried drinking, and she liked that too.

The downward spiral continued, until Douglas eventually found unexpected support from the Mental Health Court system and a caseworker from the organization Treatment Alternatives for Safe Communities (TASC).

Today Douglas is “stable” – the word makes her laugh because the first time her caseworker described that goal, it made her think of horses. Her story shows that even after three decades of struggling with drugs, mental illness and incarceration, a new beginning is possible.

(Read or listen to the rest of the story at WBEZ.)

The story notes that there are currently more than 200 people enrolled in the Mental Health Court. It’s just a drop in the bucket considering that at any given time up to half of the Cook County Jail’s 9,000-some detainees struggle with mental illness. Caseworkers, lawyers and judges told Healy that the court could serve as a model for much larger programs, though there are various challenges including budget crises and political obstacles. Success stories like Douglas provide motivation for the teams that spend so much time and effort on each case to keep going.

Medill graduate students Rachel White and Eric Cortellessa also worked on the story, spending time with Douglas and visiting Mental Health Court. White produced a video for WBEZ that ends with Douglas singing poignantly.  “I’ve been through the storm and rain, but I made it.”

Bill Healy is an independent journalist based in Chicago, and was part of the Social Justice News Nexus inaugural group of fellows for Cycles 1 and 2. He has worked with WBEZ, Chicago’s public radio station, on investigative series on juvenile prisons, the heroin trade and education.