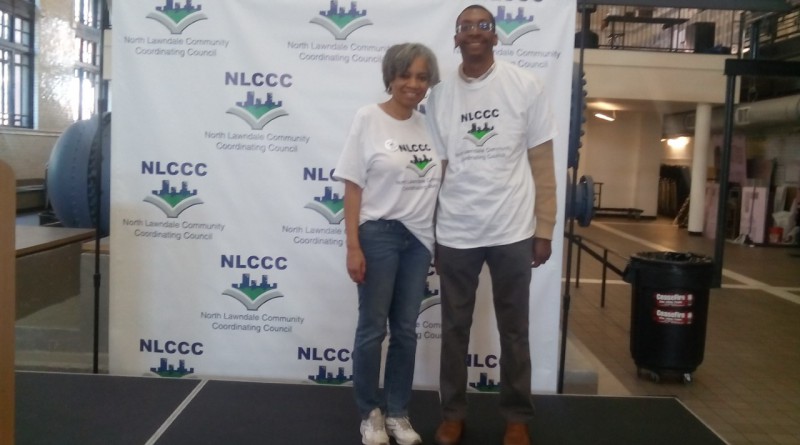 From leading North Lawndale residents in a planning conference, to updating them on the happenings in the neighborhood through her twitter feed, Valerie F. Leonard, embodies the passion of a trailblazer with a mission to create positive impact.

Leonard is an expert in community and organizational development with over 20 years of experience in the nonprofit, government and private sectors. She has a Bachelor of Arts degree in economics from Spelman College and a master of management in finance and marketing from the Northwestern University Kellogg School of Management.

Leonard assembled the North Lawndale Alliance, organized the North Lawndale Votes and writes articles for the North Lawndale Community News. She also hosts “Nonprofit U,” a blog radio talk show, an online forum for nonprofit stakeholders to discuss developments in the sector and ways to build sustainable communities. Leonard also coaches students from Crane High School in preparation for the ACT.

Below is an edited transcript from that conversation.

Joshua Conner: What does North Lawndale pride mean to you?

Valerie Leonard: North Lawndale pride really means something. You can’t really define a word with a word, but the feeling honor. I guess coming from North Lawndale, living in North Lawndale and working with people, I feel a sense of ownership of the community, and protecting it. To make sure that we get the best resources, that our children and our citizens are safe.

Conner: I understand that yesterday was a day in history, because it was the first time in 50 years that North Lawndale had a planning conference. What was your biggest takeaway from the event? What do you want to see improved for the next event?

Leonard: So this is probably the first time in really over 50 years. I don’t know about the planning conference, but definitely a planning process. We did a planning process from what I understand, from reading the Chicago Encyclopedia that funds came through in 1958, to do urban renewal. Since 1958, I believe communities like North Lawndale, Lincoln Park, Kenwood, Oakwood, Rogers Park, probably about six or seven communities [did similar planning], but we were one.

So my big takeaway from yesterday, is the work is just beginning. I was really impressed to see people from all walks of life in that room. People who can provide the skills to help us get done what we need to get done. There were residents including children, parents, and rank and file neighbors of all ages. Good to see young people there, particularly young men. There were also people there from different organizations, who have resources that might be able to help us. People from foundations, financial institutions, it was great. I think everything that we need to get started, on the plan was there. I think we are all set to go.

Conner: What advice do you have for North Lawndale residents on how they can become more engaged in their communities?

Leonard: Don’t expect change overnight. We’ll be an overnight success, but we just don’t know how many nights it’s going to take.

We didn’t have the proper leadership or cooperation amongst people who could make this happen. A lot of false starts at that point.

Fast forward to 2007 to 2008, we learned about CMAP, their technical assistance program they have for local organizations. In order for something like this to work, a comprehensive plan, which is really a strategic plan to how a community would use its resources. They’re focused on the physical environment, so ways to use land for housing, transportation, institutional, and commercial. In order to move a plan like that forward, you definitely need cooperation from your alderman and other elected officials. In 2007, we didn’t really have an alderman who would embrace that.  So we waited until the time was right.

Everything rises and falls on relationships, leadership and cooperation. So when [Alderman] Michael Scott was elected in April, he took office in May, it just so happened the deadline for technical assistance application was coming up in June.

Dennis and I put our heads together and started reaching out to people who we knew in the community. People who ran organizations, lived here, and worked here, you know stakeholders. We were fortunate enough to get about 30 or more organizations to sign onto our application. After the competitive process of competing against applications from other communities in the city of Chicago as well as southern counties, we were blessed to have been selected to get technical assistance.

We didn’t get to this point in one night. It took a team of several and it took 60 years to get to this point. We started looking at what jeopardized plans in the past and what can we do to not make the same mistakes. One of those things that we did was try to involve as many people early and often. We’re also making sure that we have a core leadership, with people with similar values, goals and motivations that makes a difference.

Leonard: My inspiration comes from my parents. My dad is deceased now, but I think he has been one of my influence. My mom was a strong influencer as well. They both came from poverty, in rural Mississippi, and education was extremely important to them. On my father’s side, my grandfather had a third grade education and my grandmother had a sixth grade education. They were some of the leaders in their communities, trying to make sure schools got filled. So they really stressed education and its importance, and that was instilled in my father.

When I was born, he kind of put himself through school, he became a teacher, and by the time he retired, he was a principal. He didn’t allow himself to be locked up in the four walls, he was very giving to the North Lawndale community, probably even more than me. He lived and he worked in the community. Gregory, and in the summertime, he would work in Manley, but that was a middle school, and Paderewski. He was a principal at Paderewski. So for about 30 years, he was at Gregory from a teacher all the way up to assistant principal. He was also very involved in other civic organizations, economic development, social change and NAACP.

He had this gift of being able to talk to the people, engage them in conversation, always encourage them and treat his students just like family. They would come over, and he would spend more time with the students. Some of the students didn’t have fathers, and he was the closest that they had. My mom came to the community, with his brothers, they all lived in the same house. As these brothers prospered, they moved to communities like Chatham. I use to say, ‘Dad, why do we have to stay here, why can’t we stay out South?’ He used to say, ‘Your community should be the place, where you learn from. If everyone who had an education left, what would you be live with?’ So over the years, stuff like that stuck with me and it became ingrained.

My motivation is when I see that the people here, are being starved of resources. It’s very hard to live in North Lawndale and read about what the Mayor is doing to this community. It’s almost as if we don’t exist. We pay property taxes, we go to school, we have to live here, but taxes, we are not getting a return on our investment. When we look at the TIFs, we had seven TIFs in North Lawndale and there’s very little to show for it.

Conner: What is your view on the state of faith in Chicago?

Leonard: The state of faith, I think we are not as strong as we need to be, that’s for sure. Our value system has changed. We don’t seem to value human life as much as we did as a community, city, or as a state like we did when I was younger. I will be 53 in October, in my lifetime, I have seen a drastic change. I don’t think that’s too long, I grew up thinking the world would be a better place. You know, you got to school, you get an education, you know things will be better. In my age group, we had a lot of opportunity. I look at my sisters’ and brothers’ kids, they don’t have the same opportunity that we had. It’s almost like we are going backwards, they’re not being taught civics, and they are not being taught ethics. People also don’t seem to be going to church, we were raised in the church. People don’t learn good ethics, if they don’t learn them at home, they don’t learn them at church, and they definitely won’t learn them in school.

Conner: How do you want to be remembered?

Leonard: Oh wow, that’s a scary thought. How do I want to be remembered? You’re right, but we really do need to think about that, because whether we do anything or not, we are going to be remembered in some way. I would like to be remembered as someone who made a difference in this world, especially North Lawndale. Someone who had changed the direction of North Lawndale or helped to change it. Someone who has started a revolution, and when I say that, I am not saying be radical and overthrow the government. We need to be revolutionary in our thinking, our approach and we need to make change. When I say revolutionary, I’m not necessarily saying we need to be violent, but we need to be innovative in our approach. I am far from having all the answers, but we definitely need to do things differently.