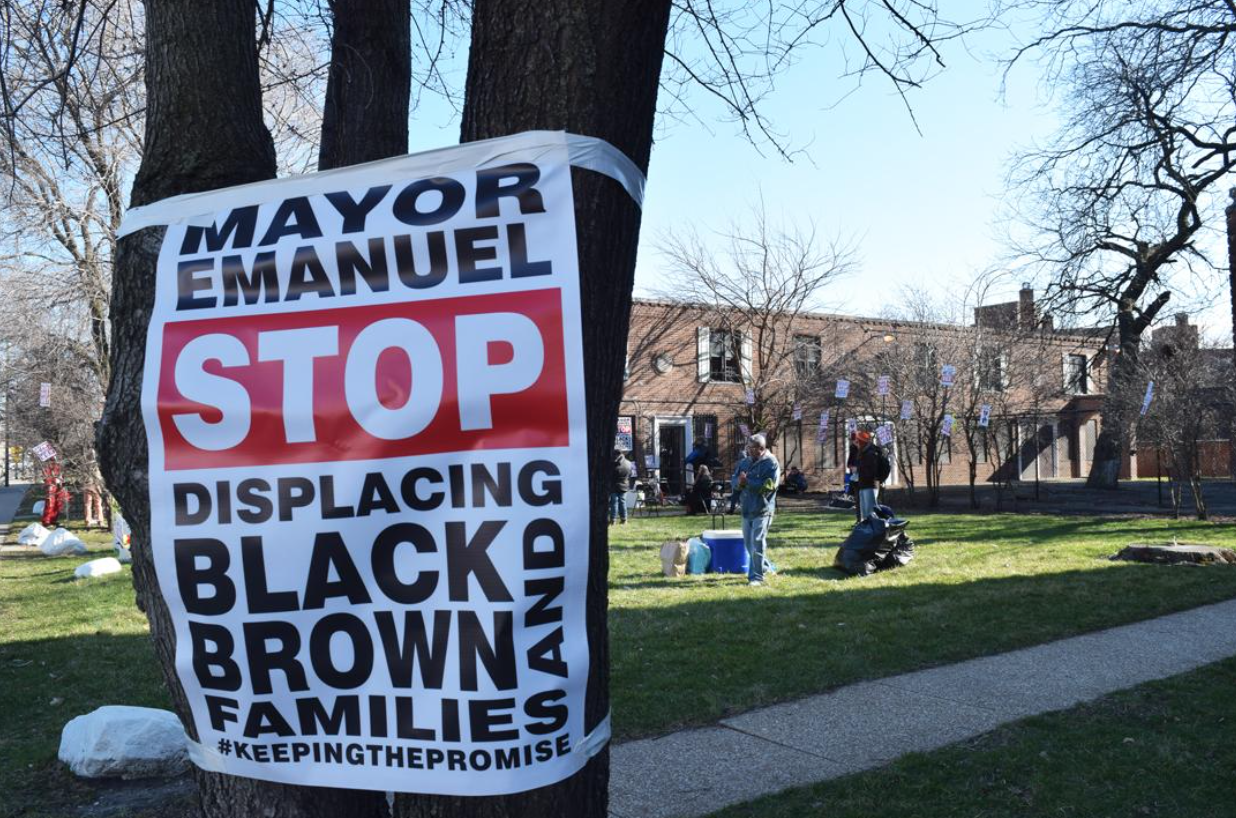 On Palm Sunday at the Julia Lathrop Homes public housing project, members of churches in Humboldt Park and Logan Square put on a performance called “Flipping the Tables” inspired by Biblical scriptures about money lenders.

In the skit, representatives of the Chicago Housing Authority working behind a small table set aside money from the “federal government” and delivered promissory notes to a group of “public housing residents.” Then “Jesus” showed up. Shouting “housing is a right,” he overturned the table and redistributed money to the “residents.”

The event was part of an ongoing campaign to preserve public housing at Lathrop Homes, the only significant public housing project on the North Side of Chicago.

“Poor people have the right just as well as the rich people to live here,” said Natalie Saffold, a displaced resident leader from the former public housing project LeClaire Courts on the Southwest Side. “We should fight to make it a law, which cannot be broken. Their promises are always broken.”

As Saffold moved out of LeClaire, CHA officials told her like other residents that she would be able to return after the development was rehabbed. But LeClaire Courts, home to Saffold for 23 years, was demolished instead, and so far the CHA has not rebuilt any units or released plans for the redevelopment.

Residents of Lathrop Homes fear they also will be displaced, even though the development plans for that site are different.  The city plans to redevelop Lathrop as a mixed income development, with 400 instead of the previous 925 units of public housing.

According to the CHA’s Lathrop master plan, which was approved by the city’s Plan Commission in February, Lathrop will be developed into a mixed-income project with 1,208 units. The previously 100 percent public housing complex will have approximately 36 percent public housing, 20 percent affordable housing and 44 percent market-rate housing.

“There is more than enough market-rate housing in this neighborhood,” said Delia Ramirez, a member of Humboldt Park United Methodist Church who came to support Lathrop residents at the Palm Sunday action. “This is one of the most diverse public housing development in the city. We need to keep it here.”

The new renovation plan for Lathrop comes more than15 years after the CHA announced plans to redevelop the site. More than half of the previous tenants will not be able to return, residents lament.

“People talk about their community. They love it. They want to stay there. Why can’t we feel the same way?” said Miguel Suarez, a resident leader who still lives on the south side of Lathrop.

Many who joined the action believe the city’s plan for Lathrop is not fair.

“They do have a right (to move here), but you don’t have the right to take it from low-income people just because you could afford to live there, you want to live there, and those people get displaced,” said Ron Simmons, a previous tenant at Cabrini Green, a public housing project on the Near North Side that was demolished in 2011.

City Council approved the rezoning of Lathrop Homes last earlier in March, clearly the way for the redevelopment plan.

The ordinance SO2015-6430 changes the zoning designation to allow the construction of market-rate high-rise units and the conversion of some of the land to commercial purposes.

Aldermen Scott Waguespack (32nd) and John Arena (45th) opposed the zoning change. They are among the co-sponsors of the proposed Keep the Promise Ordinance, which calls for one-for-one replacement of the public housing units on the north side of Lathrop.

Alderman Proco Joe Moreno (1st) is the lead sponsor of the Keeping the Promise Ordinance, and Lathrop falls largely in his ward. Moreno also approved the rezoning; he said he did so because it includes a commitment to create “525 new housing opportunities, in general and opportunity areas in the North Side of the city,” as described in a letter from CHA CEO Eugene Jones.

But Leah Levinger, the head of the Chicago Housing Initiative, doesn’t believe that sentence in the letter is adequate.

“There are no plans, there are no details about where, when or how they will be held accountable to that sentence in a letter,” said Levinger. “The Keep the Promise Ordinance will make one-for-one replacement an actual law. The developer wouldn’t be able to receive city financing in phase two until they actually produce the replacement units that were promised in phase one.”

In response to questions about the specifics of the replacement plan, Matthew Aguilar, the managing community director at the CHA, wrote to SJNN in an email that the agency is committed to creating replacements for the 525 units that will be converted from public to market rate or affordable housing under the Lathrop redevelopment plan.

“We continue to work with the community, alderman and others to identify locations and opportunities to create the housing,” Aguilar wrote. “It is a partnership of which CHA is one part. It is an ongoing collaboration and dialogue that requires all of the partners to work toward the stated goal and commitment of producing through either construction, rehab or acquisition those 525 units.”

The Keeping the Promise ordinance also asks the CHA to utilize more than $400 million in surplus federal funds on housing vouchers and construction of affordable housing units across the city, and it aims to improve the CHA’s transparency. At a hearing on the proposed ordinance in February, Jones told City Council how the agency plans to use some of those funds and increase housing opportunities.

Levinger hopes the City Council’s housing committee will vote on the Keeping the Promise ordinance by June; after that, it could go to a full council vote. She said its “passage is realistic” since half of the 50 aldermen have voiced support and they need only one more vote for a majority. Two-thirds of aldermen would need to vote for the ordinance to over-ride a mayoral veto, however.

As the climax of the action, two pastors and several housing activists occupied a vacant Lathrop
unit at 2838 N. Clybourn Avenue. Rev. Erik Christensen from St. Luke’s Lutheran Church of Logan Square said he was motivated to do this act of civil disobedience because housing inequality has hardly changed 50 years after Martin Luther King and his wife occupied a public housing unit on the West Side to draw attention to racist housing practices.

Around five hours after the activists took over the unit, the police showed up and demanded they  leave. In a statement regarding the arrest, CHA wrote that trespassing into an unsafe vacant building endangered the protesters and others. “CHA officials asked the group to leave the property and continue with a peaceful protest on the public way,” the statement said. Christensen said they told the police that they were prepared to be arrested. Eight of the protesters were taken to the closest police precinct and released about two hours later.

After repeated attempts to open a dialogue with the mayor and his office failed, Christensen said they felt like “the only alternative remaining to us was to create a story” by occupying the unit.

“We refuse to let this issue be swept under the carpet,” he said. “We refuse to go away. We’ll continue to make Lathrop Homes and people who need public housing in this city a story that cannot be ignored.”