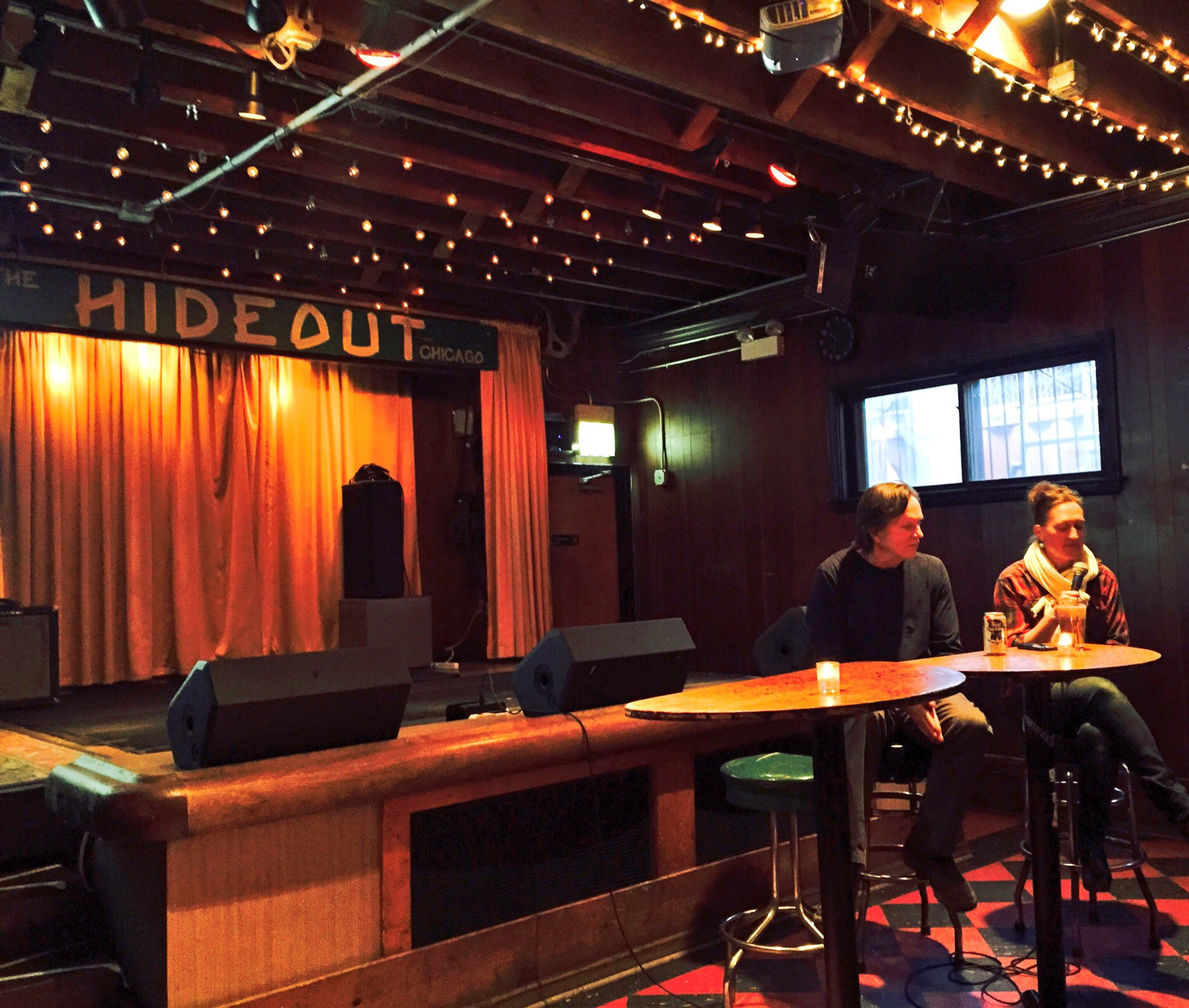 This month’s event was hosted by Belt’s editor-in-chief Martha Bayne – a current Social Justice News Nexus fellow –  and focused on the work of Lloyd DeGrane, also an SJNN fellow and a Chicago-based freelance photographer. DeGrane’s photography has been featured in the New York Times, Chicago Tribune, Chicago Reader and many more national and international publications.

The night was focused on DeGrane’s most recent work documenting homelessness in Chicago, specifically highlighting a “tent city” on the South Side of Chicago. DeGrane also presented his documentation of brownfields in both Gary, Indiana and the Southeast side of Chicago, with the help of Laurel Berman, the National Brownfields Coordinator with the EPA’s Agency for Toxic Substances & Disease Registry. Berman’s students from the University of Illinois at Chicago also came along.

Under the Shadows of Skyscrapers

Slide after slide, DeGrane named the homeless individuals he has met along the Chicago River just south of the Roosevelt Road bridge. Each photograph brought forth a brief background, a quirky characteristic or a grim story of addiction. Every photo DeGrane captures is taken with consent, and with great attention to detail.

Comparable to the North Side’s “tent city” in the Uptown neighborhood, a portion of the South Side’s homeless population resides in a tent community deep in the fields running along the Chicago River between Roosevelt Road and 18th Street. They live “under the shadow of skyscrapers,” as DeGrane notes in his presentation. Tents along the river are visible to the tour boats gliding past every hour or so, filled with tourists who live a very different reality than the people struggling to survive in the homeless encampments.

DeGrane has focused particularly on the health challenges that the people in the encampments face, both because of their living situation and their difficulties accessing care.

“Public health is the health of a community”, said Berman. Her students are currently working on resource guides for homeless people on both the North and South sides of Chicago.

While DeGrane has never slept at the South Side tent city overnight, he has been there at late hours of the evening, witnessing masses of rats roaming the encampment, often chewing through tents to get to any food. The living conditions are far from suitable, however Berman notes that people in the encampments do put significant effort into sanitation and disease prevention, keeping alcohol wipes in their tents and utilizing hand sanitizer as often as possible.

​​DeGrane has also spent much time with residents of the North Side tent city along Lake Shore
Drive underneath the Lawrence and Wilson bridges. Unlike the South Side tent city, the Uptown encampment includes women. It is also one of the few mixed-race encampments that DeGrane has visited so far.

DeGrane flipped through photos of a couple of women, one named Jackie, holding up multi-colored Afghans and hunched over outside their tents, crocheting various pieces under the Wilson Avenue bridge. The Afghan that Jackie made sold to someone for $80.

Moving from homelessness to another social justice and public health issue, DeGrane showed his documentation of brownfields in both Gary, Indiana and the Southeast Side of Chicago.

According to the Environmental Protection Agency (EPA), brownfields are “real property of which many be complicated by the presence or potential presence of a hazardous substance, pollutant or contaminant.”

Northwest Indiana is considered the most polluted area near the Great Lakes and the Southeast Side of Chicago includes various brownfields and contaminated areas. A large new brownfield was created with the recent tearing down of the State Line Generating Plant just across the Indiana border, very close to Southeast Chicago.

DeGrane showed images  of huge piles of black material called petroleum coke or “petcoke” – a toxic byproduct of oil refining — right near residences in Southeast Chicago. His images also included abandoned factories, gas stations, signs stating “do not enter” and “do not swim in the water.” DeGrane noted that contaminants from the BP refinery in Whiting, Indiana often make their way into Lake Michigan, and that sitting underneath those abandoned gas stations are unused gas tanks rotting away in the soil.

Monica Trinidad is the Communications and Outreach Coordinator for the Social Justice News Nexus.