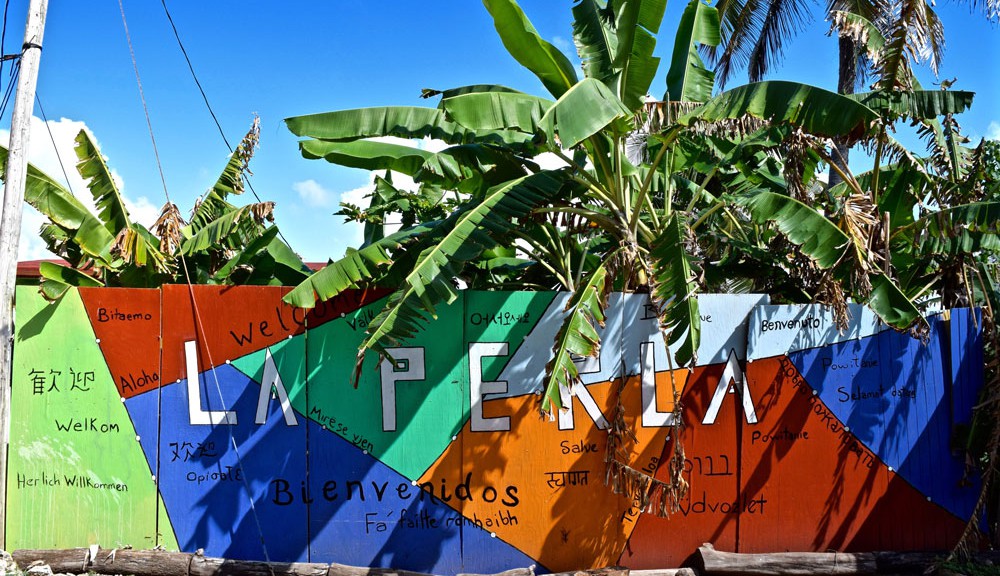 By Rebekah Frumkin and Hannah Rank

This is part 2 of a two-part series. Read part 1 here.

“They keep talking about development here,” she says, shaking her head. “Then we’ll have to move.”

The neighborhood is small – 332 residents – and battling a reputation as a nexus of drug trafficking and violence. While drug trafficking does occur in La Perla, the neighborhood is also home to a thriving community center, an athletic court and a series of professional murals impossible to overlook for their detail, color and diversity of subjects.

These facts are lost on most non-residents, however. Just standing at the entrance to La Perla prompts unsolicited advice from strangers: “Hey, I wouldn’t go down there if I were you. It’s dangerous.”

López-Rivera has wide, expressive eyes and the demeanor of a patient elementary school teacher. It’s a little before noon on a Wednesday, but La Perla’s streets are empty save for a few strutting roosters. López-Rivera waves to a young man perched on a rooftop, an old woman standing in a shaded doorway. A spotted puppy darts out of a shuttered house and begins licking López-Rivera’s feet.

“We’re divided here in La Perla when it comes to politics,” she says in Spanish. “Some of us are in the New Progressive Party, some are in the Popular Party and some of us are Independentistas.”

López-Rivera believes statehood will help lift the island’s debt, a burden that falls hardest on low-income communities like La Perla.

“We understand the kind of benefits it could bring to our community,” she says. “Not only our community but also our island. We’re fighting and working for that.”

To López-Rivera, statehood means many things. For one, the chance to fully benefit from Supplemental Security Income and Medicaid, which currently covers citizens of the island at half the rate of mainland citizens. Or the elimination of costly port tariffs. Or an influx of financial support that could revitalize La Perla, which is facing municipal threats of redevelopment and displacement every day.

“A lot of people will lose their houses if they pay taxes,” she says in Spanish.

Polo was born on the island but moved to Syracuse, New York at the age of 17. She worked as a nurse and raised her family in the U.S., returning later to support her ailing grandmother in a town called Bayamón. There, she spent much of her savings, suffered feelings of isolation and depression, and began using heroin.

She has been at Compromiso La Vida for five months and is now clean. Although she misses her children and New York, she has kept busy. She’s painted the center’s dining room walls: a chain of ivy rings the room’s perimeter, and the words “love,” “dreams” and “hope” appear in cursive beside the kitchen door. She cooks three meals a day for the other women and staff, sometimes preparing dishes for as many as 15.

When it comes to alleviating the island’s debt, Polo’s opinions tilt towards statehood.

“I feel bad for the country people [who will pay taxes],” she adds in English. “But in the other way I feel like yeah, we’re gonna have a lot of help to be a state.”

On the island’s easternmost tip in the low-to-middle income town of Fajardo, Gerardo Jones is also on a path to recovery. After several years of crack cocaine abuse, Jones quit and decided to dedicate his time to helping others like him. Now he works as an advocate at Intercambios Puerto Rico, a nonprofit dedicated to decriminalizing drug use and reducing harm for users on the island. He says drugs were an effective escape from his family’s politics.

“My family wanted Puerto Rico to be part of the United States,” Jones says in Spanish. “When I started smoking marijuana, it opened doors of consciousness for me. I realized there was this problem with my family. They accepted being colonized.”

Intercambios Director Rafael Torruella is a member of the Independentista party and sees a clear connection between drug use and the island’s colonial status.

Torruella is gregarious and fluently bilingual, a San Juan native with a doctorate from City University of New York. He sees the island’s $72 billion debt as a form of colonial oppression, one method among many of controlling and subjugating Puerto Rican people.

“I don’t believe in colonialism. I don’t believe in imperialism. I think people have a right to be free, and Puerto Rico has not been,” Torruella says. “When you look at what’s happening in the insular cases and arguments used to keep Puerto Rico as part of the United States, the narratives that were used to describe our people were really racist and degrading.

Right now the Supreme Court is discussing the issue of Puerto Rico, and many times there aren’t even Puerto Ricans there in that discussion.”

Like Torruella, renowned artist and poet Rafael Trelles is a member of the Independentista party. His paintings are magical realist snapshots: a figure emerges from the mouth of a fish, a pair of “divine twins” towers nearly as high as a tree.

Trelles says the Puerto Rican government’s ability to make economically viable commercial treaties with other countries has suffered due to U.S. interference.

He believes the island’s debt could be alleviated were it not for the yoke of colonialism.

“Colonialism has destroyed the working culture of the most poor sectors of our population and created a culture of dependence,” Trelles says. “This dependence has continued from generation to generation.”

This is part 2 of a two-part series. Read part 1 here.
Back to Puerto Rico main page.