In his famous “I Have a Dream” speech at the 1963 March on Washington, Dr. Martin Luther King Jr. called on civil rights activists to “go back to the slums and ghettos of our northern cities, knowing that somehow this situation can and will be changed.”

In January 1966, King himself did just that when he packed up his family to move into a slum apartment in Chicago’s North Lawndale neighborhood to work on improving housing conditions for the city’s black population as a part of the Civil Rights Movement in the North.

“It became critical for Dr. Martin Luther King Jr., if he were really going to change racial inequality in the United States, then he needed to address racial inequality in the North; otherwise, he’d just be a Southern leader, rather than dealing with a national problem,” said Aldon Morris, a professor of sociology and African American Studies at Northwestern University.

Fifty years after King moved to Chicago for eight months, community organizations across the city are working on projects to promote King’s legacy in Chicago and advocate for fairer housing in the city as King did in 1966. Lawndale Christian Development Corporation (LCDC) is one organization that has focused on revitalizing the North Lawndale community through a variety of projects focused on economic development, housing access and educational opportunities since it was founded by the Lawndale Community Church in 1987.

In order to increase affordable housing options in the community, LCDC teamed up with the Chicago Local Initiatives Support Corporation (LISC Chicago), which works with organizations like LCDC to transform distressed neighborhoods. LCDC, with funding assistance from LISC Chicago, created the 45-unit Dr. King Legacy Apartment Complex and the MLK Fair Housing Exhibit at 1550 S. Hamlin Ave. – the location where King lived during the Chicago Freedom Movement.

“The perfect example of the neighborhoods recognizing and honoring Dr. King’s legacy is the MLK Apartments,” said Keri Blackwell, deputy director of LISC Chicago. “LISC partners with communities throughout the city of Chicago to support a comprehensive community development approach. Our goal is not just to address one specific challenge or opportunity; it’s really about taking a holistic, comprehensive look to improve the quality of life of residents that live in the community.” 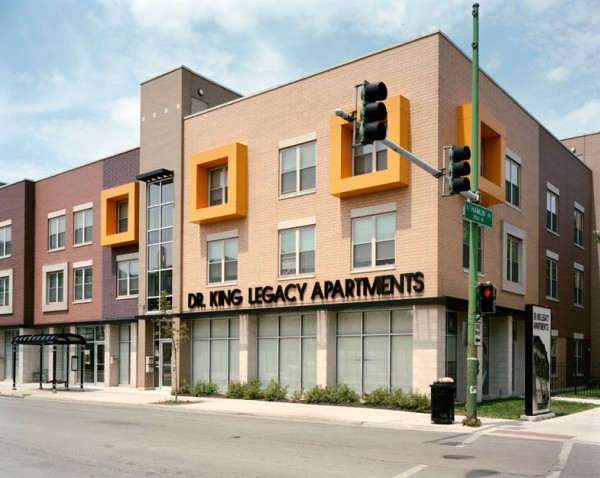 When the apartments opened in April 2011, people lined up around the block to apply for housing in the complex. Two years later, the MLK Fair Housing Exhibit was completed in the apartment complex’s corner unit, providing a history of North Lawndale and Dr. King’s time in Chicago. Since then, hundreds of people have walked through the exhibit and civic leaders have used the space for meetings.

“It sheds some light on the past, but it also can shed light on what’s going on now. Many things haven’t really changed, particularly in North Lawndale,” said Larry Dixon, who coordinates the exhibit.

During King’s stay in Chicago, he witnessed the deplorable condition of public housing. The city’s racial segregation was apparent, and many black residents in neighborhoods like North Lawndale were victims of redlining – the discriminatory practice of denying financial services (like mortgages or loans) to certain neighborhoods, typically targeting poor people of color, according to the MLK Fair Housing Exhibit.

Throughout the summer of 1966, King and civil rights activists were met with great hostility while leading marches to end housing segregation. Race riots broke out in July, and during an August march, King was hit by a rock, while bottles and bricks were also thrown at the marchers. By August 1966, Chicago Mayor Richard J. Daley was anxious to end the demonstrations and agreed to negotiate with King and various housing boards. A summit agreement was reached, calling for the Chicago Housing Authority to build public housing with limited height requirements and the Mortgage Bankers Association to make mortgages accessible to people regardless of race – a deal that had little teeth, Morris said.

King called this agreement “the ﬁrst step in a 1,000-mile journey.” Some experts say this journey is still underway. For instance, Chicago is the United States’ most segregated city, according to U.S. Census data. However, in talking to the Brookings Institution early this month, the Chicago Tribune said that Chicago ranks third, behind Milwaukee and New York. Also quoting Brookings, the Economist.com said that in 2000, 81 percent of Chicagoans would have had to move out of their census tracts for the city to be evenly mixed, but now only 76 percent would have to do so.

“The civil rights movement really did believe that one day in the United States, there would be full racial integration and no segregation in terms of housing and schools, but what we see is things getting worse rather than better,” Morris said.

Today, 7.2 percent of North Lawndale residents live in crowded housing, compared to 4.7 percent of Chicagoans on average throughout the city. In the neighborhood, 38.9 percent of households live below the poverty level, while 18.7 percent of the rest of the city overall experiences this level of poverty, according to the Chicago Tribune.

“We need a comprehensive, planned effort with the community in regard to transportation, economics and civic life,” said LCDC’s executive director Richard Townsell, who lived just two blocks from where King stayed while in Chicago in 1966. “There’s still so much vacant land in North Lawndale that we need to rebuild and make it be a place where people choose to live.”

North Lawndale College Preparatory High School (NLCP) is a charter school working to improve the living conditions of its students. NLCP estimates 8 to 10 percent of its 900 students experience homelessness at least a portion of the year. To address the issue of youth homelessness in the community, Old St. Patrick’s Church and NLCP began collaborating in 2014 with Youth Outreach Services, which supports child welfare, counseling, juvenile justice and prevention services, and The Night Ministry, which offers housing, health care and support to Chicagoans suffering from homelessness or poverty. Together they are hoping to open a facility by fall 2016 that will provide housing for up to 22 homeless NLCP students per night, 14-18 years old. There are hopes to eventually open the facility to other West Side high schools and begin another facility in the Englewood neighborhood in the future.

“We have been hoping to expand youth housing services for quite some time,” said Jenny Byelick, a project manager at The Night Ministry. “One thing we try to focus on is the correlation between housing and education – instead of just providing housing, we want to connect to the ability for young people to finish high school and go on to college.”

True to King’s work in Chicago, Byelick said North Lawndale community organizations have great focus on housing access throughout the neighborhood. The first community meeting for the youth housing facility even took place at the MLK Fair Housing Exhibit.

“We symbolically chose it because it is in the heart of neighborhood and represents fair housing and opportunity,” Byelick said.

Other neighborhoods are also focusing on commemorating King’s summer marches through Chicago 50 years ago. As of fall 2015, the Chicago Lawn neighborhood welcomed Freedom Field to Marquette Park, a project LISC Chicago contributed to alongside the Cal Ripken Sr. Foundation, Cubs Charities and Under Armour. Freedom Field was the 50th youth development park created by the Cal Ripken Sr. Foundation. Its location was chosen due to the significance of King’s August 1966 marches through Marquette Park protesting housing segregation.

Coinciding the 50th anniversary of King’s marches in Chicago, Marquette Park will also become home to a living memorial to King, a project by the Inner-City Muslim Action Network (IMAN) in partnership with Chicago Public Art Group (CPAG).

“Chicago Public Art Group has a long history of engaging with the community to develop public art that has meaning and relevance, so this project is a way to communicate an important part of Chicago history and allow the public to reflect and understand this piece of history,” said Steve Weaver, CPAG’s executive director.

The memorial will be made of red brick and feature four 10-foot-tall columns. Artists Sonja Henderson and John Pitman Weber have been working on the project in collaboration with IMAN.

“It’s been excellent, eye opening, and very poignant and topical,” Henderson said. “A lot hasn’t changed in 50 years. His march was so important as it began to galvanize the fair housing movement, but making change through the years has not been pretty.”

Henderson and Weber both said they hope the residents come together for community events like poetry readings in the plaza where the memorial will be located.

“There is a sense of home cooking when people look at this,” Weber said. “They don’t have a reaction of being dazzled, mystified. Rather, they recognize something that belongs to them and their neighborhood.”

The unveiling of the memorial is expected to take place on August 6 as a part of IMAN’s Takin’ it to the Streets event, an outdoor Muslim-led urban international festival.

“This project has been 10 years in the making. It’s been a long time coming,” said Rami Nashashibi, IMAN’s executive director. “It would be a tragedy not to complete the first MLK memorial in Chicago.”

Alexandria Johnson was a Social Justice News Nexus fellow in 2014-2015. This piece was originally published in Streetwise on Mon, Jan 25, 2016.