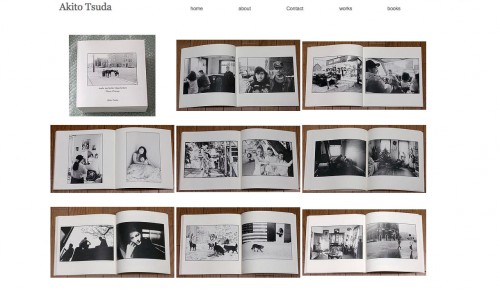 After a few e-mail exchanges, former Social Justice News Nexus fellow Jackie Serrato found Akito Tsuda, the man behind a collection of some of the most unique photos taken of Pilsen residents in the 1990s.

Interestingly enough “made me better than before. Pilsen, Chicago” — this black and white, 124-page photo collection that contains 140 images — was not first published in Chicago or anywhere else in the United States. The book actually made its first appearance in Japan last month and can only be found in the shelves of Japanese bookstores at the moment.

For her article in Chicago Voz titled, “A Book Published In Japan Captures Mexican Pilsen In The 90’s,” Serrato asked Tsuda about his life living in the Chicagoland region, and the many images that he captured of Pilsen in some of its most intimate moments back in the 1990s. Back then Pilsen was dubbed a “neighborhood not safe to walk through at night,” and “a hot spot for gang violence.” But the local residents and distinctive colorful characteristics of the neighborhood drew Tsuda in the moment he walked Pilsen’s lively sidewalks for the very first time.

“I was attracted by the presence of people on the street. I remember many people were sitting on their front door or steps and their tolerance and open mind towards my activity. It was the people who motivated me to repeatedly visit Pilsen,” said Tsuda in an e-mail to Serrato.

To many people’s surprise, Tsuda does not have any connection with Latinos except that he himself was an immigrant from Japan and came to the United States — like many Latino immigrants, to work and find opportunities.

Tsuda’s pictures are candid, detailed, intimate, and in many ways they help transport the viewer back to the 1990s in Pilsen. The images come alive filled with details and unique interactions among people that are often hard to capture. Such moments include a dad hugging his daughter, a group of men hanging out outside one of Pilsen’s traditional brick stone buildings or an old man interacting with a couple of dogs and a kid while sitting in the front entrance of a building.

“How would you describe the people of that time and place?

People’s tolerance helped me a lot. I think people did not care much where I came from. Some people probably thought I was from China which was no problem with me. I did not ask people to introduce me to their family members nor their friends for photographing. However, many people in Pilsen invited me to take a photo inside of their homes.

Thank you for trusting me. Those warm receptions encouraged me to continue walking and taking photos in Pilsen.”

In Serrato’s piece, Tsuda acknowledges his initial desire to impress teachers and students with the images he was allowed to take during some of his earlier visits. He says that he tried to stay away from “stereotyping the people in the neighborhood,” But on some occasions, he also says he was turned down by potential subjects. Tsuda says he was able to learn from each experience and “became more conscious about [his] behavior with the camera.”

“I did not tell people how to look at the camera. Also, I could not ask because of my low-skilled English and Spanish. But people sensed my interest and cooperated with me. Each encounter made my step lighter and gave me a joy to walk in the street,” said Tsuda in an e-mail to Serrato.

To read Serrato’s interview and learn more about Tsuda’s approach, his views on gentrification and his hopes as he worked to publish his book, go to:

To learn more about Akito Tsuda and his work or to buy his book, click here: