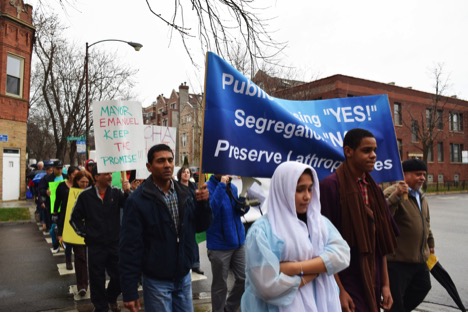 Chicago protesters invoked the Biblical Christmas story and the Latino tradition of Las Posadas celebrations in the latest action calling for the preservation of public housing units in the Lathrop Homes development on the North Side.

Like Mary and Joseph who were turned away and could find no shelter, protesters said Lathrop residents risk losing their homes because of the planned redevelopment of the public housing project.

Enacting the Biblical story, Amary Palmer, 17, and Elian Morris, 15, dressed as Mary and Joseph, led a procession of more than 70 local congregation and community members from the New Life Community Church through the Lathrop Homes on a rainy Sunday afternoon, Dec. 13.

The pair were repeatedly refused by “Innkeeper Rahm” on the door steps of different units in the largely boarded-up public housing complex. Protesters blame Mayor Rahm Emanuel and the Chicago Housing Authority for failing to preserve more units of public housing at Lathrop, which is slated for mixed-income redevelopment.

“Your names and your faces mean nothing to me,” said Rev. Erik Christensen, in the role of the innkeeper. “Don’t bother us any longer. I’ve already told you; these doors will not open.”

“Mayor Emanuel, if you care about people in the city of Chicago the way you said you do, then you won’t tear this down!” said Cynthia Scott, vice president of the Lathrop Local Advisory Council and a Lathrop resident for more than 30 years. “Don’t make us homeless! There are enough homeless families.”

Scott moved from the north side of Diversey Parkway to south side of it years ago. She said the CHA promised her she would not have to move again until they rehabbed her previous unit and allowed her family to move back in. But now the CHA wants to tear down the building where Scott currently lives to park trucks for demolition, she said.

Residents say the housing authority has also broken other promises.

“There is not enough low-income housing, and many of us are unable to pay for affordable housing or market-rate housing,” said Scott. “I am concerned that I will never be able to move back.”

“I’m upset that they are trying to tear down the house,” said Palmer, playing the role of Mary. She said her grandmother lived in Lathrop, “so I’m doing this also for her.”

As the procession culminated, marchers placed pictures of families on the doors of shuttered units, symbolically opening the doors for them. The crowd cheered and yelled, “This is right!”

“We just want to visualize that we will live there, to remind people that these are homes where people could live if only CHA opened it up,” said the Rev. Bruce Ray from the Logan Square Ecumenical Alliance, which organized the event along with the Lathrop Leadership Team, Lathrop Alumni, Lathrop Local Advisory Council and the Logan Square Neighborhood Association.

Before the crowd headed back to New Life Community Church, they chanted the hymn “Oh Come, O Come, Emmanuel.”

“We believe in a different Emmanuel than this Emanuel,” said the Rev. Paula Cripps-Vallejo, during a prayer. “We hope Mayor Emanuel could live up to his responsibility for his name’s sake and be the hands and feet of God, by taking more seriously his role as a caregiver.”

This is the latest of numerous protests and actions around the Lathrop redevelopment.

On Nov. 9, clergy and community members marched around City Hall and delivered petitions to Meghan Harte, the mayor’s deputy chief of staff for CHA, and asked for a meeting with the mayor.

Residents and activists have been pushing for a proposed ordinance, called Keeping the Promise , which they say would keep CHA accountable to its original redevelopment plans, A hearing has been scheduled for January 7. The November 9 march also had Biblical overtones, with protesters invoking the tumbling of the Wall of Jericho, saying the “Wall of CHA” must fall. “There are cracks in the walls!” said Ray.

Christensen, the pastor who played the role of “Innkeeper Rahm,” believes that the timing is good for the ordinance to pass, since the mayor is facing massive public outrage in the wake of the release of video of a white officer shooting black teenager Laquan McDonald.

“The entire country is watching Chicago,” said Christensen. “Mayor Emanuel stated recently that he’s responsible to make sure that the city regains people’s trust. What better way to do this than to keep the promises made to Lathrop Homes residents 15 years ago? The opportunity in front of the mayor and our elected officials is to do the right thing now, and to be on the right side of history today.”