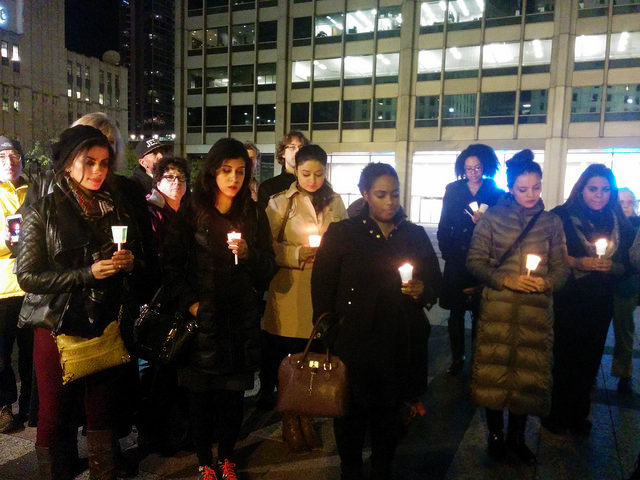 With many U.S. states, including Illinois, trying to slam their doors to Syrian refugees, many in the Syrian community in Chicago say they are losing their faith in the American government.

In the wake of the Nov. 16 attacks in Paris and the discovery of a Syrian passport next to a suicide-bomber linked to those attacks, Illinois Gov. Bruce Rauner called for a temporary suspension on accepting new Syrian refugees in the state. He said the move was necessary to cope with “the all-too-real security threats facing America.”

Hadia Zarzour, case management coordinator at the Syrian Community Network in Chicago, said she was disappointed and furious at the governor’s statement.

“Nobody wants to be a refugee,” she said. “I was so saddened with what happened in Paris, but this is happening in Syria every day.”

Zarzour, who came to Chicago six years ago, said that since the revolutionary uprising and civil war in their country, Syrians face a situation where “home won’t let you stay.”

Meanwhile she is among the many who are skeptical about the connection between Syrian refugees and the Paris attacks.

“Who would bring a passport if they were to do that, and leave it there?” she asked. “It’s ridiculous and more ridiculous for people to believe it.”

According to the Refugee Processing Center, the U.S. has accepted more than 1,800 Syrian refugees in 2015, with 136 resettled in the state of Illinois.

Dr. Zaher Sahloul, former president of the Syrian-American Medical Society (SAMS), has helped re-settle 16 Syrian families. He said he wishes governors would “look at them with the prism of humanity” and help them, instead of barring them because of security fears.

“In the rhetoric that is meant to score political points and make people afraid of the refugees,” he said, critics are speculating that “most of these refugees are military age men which means they are potential terrorists.”

But, according to the United Nations High Commissioner for Refugees (UNHCR), at least 70 percent of the Syrian refugees are women and children.

“People have to check these facts and not lie to the public,” Sahloul said. He described the misinformation as “dangerous” because it could compel some Americans “to look at immigrants differently,” causing hate crimes and division within the community.

The Syrian crisis started in 2011 and as of September 2015, the estimated death toll has exceeded 220,000 with the internal displacement of about 7.6 million Syrians, according to the United Nations website. Four million refugees have registered with the UNHCR and more than 12.2 million people are in need of humanitarian aid.

“This makes us sad because we have seen the situation in Syria,” said an emotional Wafa Edlbi in Arabic. Edlbi, who lived in Damascus, came to Chicago in the summer of 2012 to visit her daughter. At the same time, the regime started bombing the suburbs just 15 minutes away from her home, forcing her to stay in the U.S.

“There is no safety,” Edlbi said. “This isn’t going to end anytime soon, which is why we want other Syrians to come here so that they can feel secure.”

Some Syrian-Americans said that the states’ bars on Syrian refugees in the wake of the Paris attacks were “sadly and unfortunately expected.”

“Everyone acquainted with Syria understands that when you are dealing with ISIS, it’s a slippery slope,” said Sami Shabeeb, treasurer and co-founder of the Students Organize for Syria (SOS) chapter at Loyola University. “But, 99.9 percent of the people in Syria are either trying to stay away from dying or are dying.”

Shabeeb was born in Chicago soon after his parents arrived in the U.S. to seek the “American dream.” Other relatives were forced to flee Syria recently as they became victims of civil war and political repression.

“They were originally all in Damascus,” Shabeeb said. “Now I have a cousin in Austria, one in Barcelona. I have aunts in Jordan, some in Turkey, people in refugee camps. I have cousins who have disappeared and second-cousins that have died.”

While governors including Rauner have said they will not allow Syrian refugees to be resettled in their states, others argue that refugee screening is the federal government’s responsibility. Democratic Congressmen and the White House have assured Rauner and other governors that a stringent screening process is in place.

“The U.S. constitution and law authorizes the president and the federal government to resettle the refugees,” said Sahloul, who acknowledged that state governments can decline federal funds for resettlement and refuse to admit refugees.

“Refugee resettlement is largely a federal matter,” added Fred Tsao, senior policy counsel at the Illinois Coalition for Immigrant and Refugee Rights (ICIRR). “It’s not that the states can control the refugees or discriminate against different nationalities that they come from.”

Tsao said that ICIRR has reached out to the governor’s office attempting to persuade him to change his mind.

“If the concern is national security, these folks have been screened like crazy,” Tsao said, describing the nearly two-year waiting period involving rigorous background checks before Syrian refugees can enter the U.S.

Some described the actions of Rauner and other Republicans as part of the highly polarized politics that have taken hold since President Barack Obama took office.

Some Syrian-Americans like Shabeeb feel that no matter how difficult politicians make things for refugees in the U.S., it still pales compared to the fear they have for their relatives back in Syria

Reflecting on the uprising and its aftermath, he sadly said, “Deep down you’re not suffering and you’re not the one going to die, but you know your family is going to die.”